Home » Bikes » 2021 MotoGP: Aprilia back on the podium in British GP – paultan.org

2021 MotoGP: Aprilia back on the podium in British GP – paultan.org 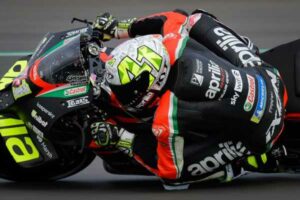 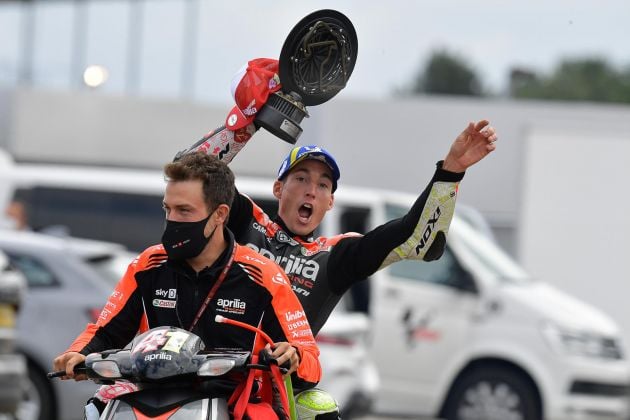 With Fabio Quartararo stamping his dominance all over the 2021 MotoGP World Championship over the weekend at the British Grand Prix in Silverstone, making a welcome comeback to the podium was Aprilia Racing Team Gresini. With the third place finish by Aleix Espargaro, the win is Aprilia’s first podium place after returning to the MotoGP class in 2015 as a factory team.

While Quartararo grabbed a comfortable 25-points for his win, Alex Wins of Team Suzuki Ecstar came in second, his first podium of the 2021 MotoGP season. All was not well for multiple world champion Marc Marquez of Repsol Honda who got into the motorcycle equivalent of a fist fight with Jorge Martin of Pramac Ducati.

All the action took place on the first lap, as Martin made contact with Marquez going past in Stowe corner. Not one to let things lie, Marquez then dived inside Martin on turn 9, touching fairings, low siding and taking Martin with him. 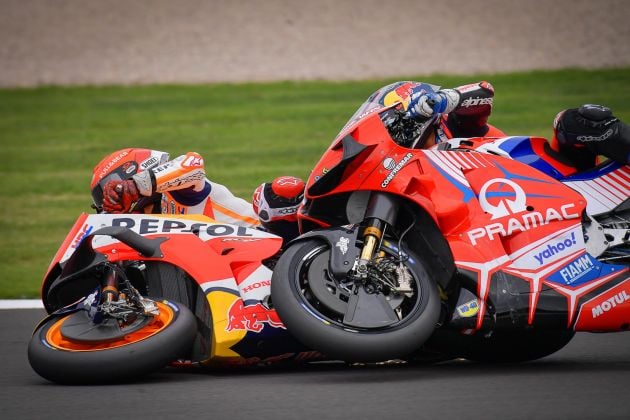 At the start of the race, Marquez’ team mate Pol Espargaro got the hole shot, but was swiftly over taken by Quartararo who started from third position but fluffed his launch. From that moment, Quartararo never looked back pulling a 1.3 second lead on the field by lap 7, extending this to three seconds mid-way through the race.

However, lots of close quarters fighting was taking place behind the Monster Energy Yamaha rider, with Espagaro, Rins, Jack Miller of Ducati Lenovo Team all fighting it out for the precious second and third place podium finishes. Rins played a tactical game, making the most of his chances and performing clinical overtaking manoeuvres to slot in second behind Quartararo in the second half of the race.

Miller and Espargaro were then left to settle the issue of who would get to stand on the podium in third, with Espargaro well aware he was at this point about make make modern racing history for Aprilia. Miller, despite a courageous overtaking move on the last lap in turn 13, was unable to make the move stick. 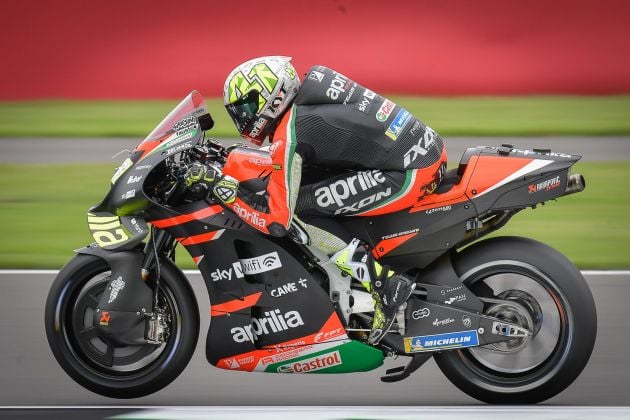 With a tight line into turn 14 due to his overtake in 13, Miller was unable to fend off Espargaro’s counter-move heading into Wellington, Silverstone’s back straight. Espargaro then played a defensive game, beating Miller to the line by a mere 0.149 of a second.

With seven rounds to go, including the overseas rounds in the US and Argentina, Quartararo stands atop the MotoGP riders’ championship with 206 points. Following behind the Frenchman are Joan Mir of Team Ecstar Suzuki with 141 points, and Johann Zarco of Pramac Racing with 137 points.

Francesco Bagnaia and Jack Miller of Ducati Lenovo Team fill in the fourth and fifth places with 136 and 118 points, respectively. Racing heads to Alcaniz, Spain, in 10 days for the Aragon Grand Prix on the weekend of September 10 to 12.