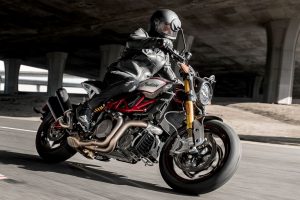 Powering on with its 2022 Indian Motorcycle FTR range of flat tracker naked sports bikes, a new model has been added to the catalogue, the Indian FTR Rally. Being released in 2021 for the 2022 model year, the FTR series of motorcycles is a blend of American flat tracker styling and streetfighter performance, coming together an attractive whole that works.

Comprising of the base model FTR, the FTR S, the top-of-the-range FTR R Carbon and now the FTR Rally, motive power comes from a 1.203 cc liquid-cooled V-twin. Said to be the most powerful American made two-cylinder mill in a motorcycle, the FTR puts out 123 hp and 120 Nm of torque, numbers comparable to its closest rivals available in the Malaysia market, the BMW Motorrad R nineT (seven models, from RM84,900 to RM104,500) and the Ducati Scrambler 1100 (two variants priced at RM75,900 and RM80,900). Differentiating the FTR S from the base model FTR is a 4.3-inch LCD touchscreen display, with Bluetooth and USB connectivity to the rider’s smartphone. Also standard is an Akrapovic exhaust, three ride modes, wheelie control, traction control and stability control, along with cornering ABS.

For the FTR Rally, wheel sizing is a 19-inch front and 18-inch rear, compared to the 17-inch wheels on the rest of the FTR series. Standard are ProTaper handlebars set 50 mm taller than stock and the LCD panel of the FTR S and FTR Carbon is replaced with the analogue unit from the base FTR. In terms of colour options, the base model Indian FTR comes only in Black Smoke, while the FTR S is available in White Smoke and Maroon Metallic. The FTR R Carbon comes win Carbon-Fibre while the FTR Rally has one colour option, Titanium Smoke.

There is no longer representation for Indian Motorcycles in Malaysia, after its distribution agreement with Naza lapsed and was not renewed for 2021. It remains to be seen if a new distributor will pick up the reins for this American brand, after distributorship for Harley-Davidson in Malaysia also slipped through Naza’s grasp.