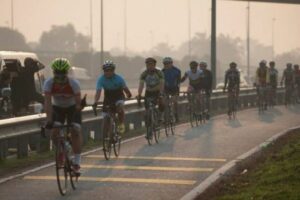 While some find the constant revision of standard operating procedures (SOP) under the various definitions of lockdown in Malaysia confusing, some good news at least for cyclists. Under Phase 1 and Phase 2 of the National Recovery Plan (NRP) announced July 19, cycling and other individual sports is now allowed with a minimum two- to three-meter separation distance but only in the neighbourhood.

This is an activity clamoured for by many in the cycling community, notably after police came out to say cycling as a sporting and recreational activity was forbidden under the Movement Control Order 3.0 (FMCO) SOP. However, cycling to work was allowed under the FMCO enforced from June 1 to June 14, with all outdoor recreational activities, including walking and jogging, then forbidden under further extension of the order.

The Malaysian transport sector also sees a relaxation in the SOP, with ports, airports and logistics sector permitted to operate around the clock. Meanwhile, business premises are permitted to operate from 6.00 a.m. to 10.00 p.m., including speciality stores such as petrol stations.