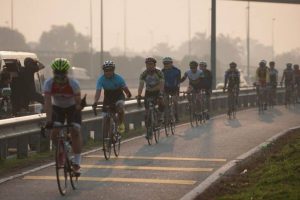 Cyclists in neighbouring Singapore will no longer be able to ride brakeless on public paths and roads in the future. This comes about from a set of recommendations forwarded by the Singapore Ministry of Transport, reports Channel News Asia.

The recommendation was listed in the Active Mobility Advisory Panel’s fourth review, which has been accepted by the government. Submitted on December 30, the review intends to promote safe use of active mobility devices.

This ruling mainly affects riders of “fixies” or fixed gear bicycles. Unlike freewheel equipped bicycles, fixies do not allow the rider to stop pedalling and “coast”, and the rider is required to keep their feet moving at all times. Braking on a fixie is done with the rider exerting pressure on the pedals, or back pedalling. However, this requires effort and coordination and there is no guarantee the rider is able to stop in time in an emergency.

To abode by the ruling, cyclists are required to have at least one brake installed and functional when using public paths and roads. Placing the onus on safety on cyclists, a statement from the ministry said, “All active mobility device users should continue to practise safe riding and to look out for other path and road users.” Addressing the issue of insurance for cyclists, the panel highlighted the need to monitor this requirement, which has been in effect in Singapore since December 2020 for all mobility device users who ride for business or commercial reasons to be covered by third party insurance.

The panel advised that the insurance requirement should be extended to non-commercial users with a need for the insurance industry to provide “accessible and affordable third party insurance” for cyclists. In Malaysia, fixies are popular among young riders in urban areas, plus the young cyclists who indulge in the sport of “basikal lanjan” are found of illegally modifying their bicycles for more speed, including the fitting of undersized tyres and removal of brakes.