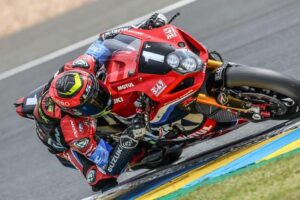 Capitalising on this, SERT earned a 10 point bonus for leading the race at the eight hour. Stomping into the lead by the third hour, SERT held on to the lead, finishing the Le Mans race in a total of 24 pitstops across 855 laps, taking the chequered flag eight laps clear of second place finisher Webike SRC Kawasaki France Trickstar and 13 laps clear of BMW Motorrad World Endurance Team in third.

With the win in the season opening EWC race, SERT have a 16 point leading in the championship standings, taking 64 of the 65 points available. This comprises of four points for the second place race start, 20 points for leading the race at the eighth and sixteenth hours and 40 points for the race win.

Season opening favourite YART–Yamaha Official EWC Team, leading in the initial stages of the race, had to withdraw from competition with engine failure, with only 14 points to show for the weekend’s efforts. Racing moves to the 12 Hours of Estoril, Portugal on July 17, with the other two races in this year’s shortened race calendar being the Bol D’or in France come September and the 8 Hours of Suzuka in Japan on November 7.