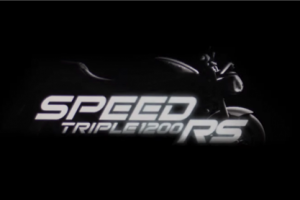 After paultan.org getting wind of it in June last year, the boys from Hinckley have released a teaser for the 2021 Triumph Speed Triple 1200RS, due for worldwide launch on January 26, 2021. From the short 22-second teaser video, the Speed Triple 1200RS comes with the new look LED headlights with twin DRLs, similar to the units used on the Street Striple 765RS.

Photos show a new design tail light, an OLED unit flanked by what appears to be LED brake lights. In the photo of the headlights, the twin units are slanted like the ones installed on the 765RS, bisected by a central air intake, and the glow highlights a carbon-fibre mudguard, adorned with the Triumph ‘T’. Few other details have been released, but the gold anodised upside-down fork legs indicate a premium product either from Showa or Ohlins, full-adjustable, of course. Similar can perhaps be expected at the back end, with a full-adjustable Ohlins monoshock much like the unit found on the 765RS.

It wouldn’t be out of the question to expect semi-active electronic suspension, given that the ‘RS’ tag is reserved for Triumph’s top-of-the-range sports bikes. This would be in keeping with the Street Triple’s current competition like the Ducati Streetfighter V4S and Aprilia Tuono V4 1100 Factory, both of which feature electronically adjustable suspension.

As surmised in our earlier article, displacement for the Speed Triple has taken a bump to 1,200 cc from the previous 1,050 cc. As for horsepower, with rivals like the Streetfighter V4S putting out over 200 hp, we can safely guess the Speed Triple 1200RS will not be far behind.

Other goodies that Triumph Speed Triple fans can expect will be braking by Brembo, though whether it will be the M50 units fitted to the 765RS or the lighter and stiffer Stylema callipers currently de rigueur for today’s super bikes. Also expect a full-colour TFT-LCD, with Triumph’s Bluetooth connectivity and app possibly being an option.

END_OF_DOCUMENT_TOKEN_TO_BE_REPLACED

END_OF_DOCUMENT_TOKEN_TO_BE_REPLACED
We and our partners use cookies on this site to improve our service, perform analytics, personalize advertising, measure advertising performance, and remember website preferences.Ok