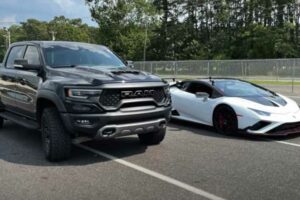 Can a modified truck match the performance of a supercar?

A Ram with a Hellcat engine – this is the easiest way to describe the Ram 1500 TRX, one of the most capable trucks on the market today. For some, the factory power of 702 horsepower (523 kilowatts) and 650 pound-feet (881 Newton-meters) of torque is not enough though, and there are already known upgrades to boost that output significantly. But how much power is enough to make the TRX as quick as a supercar on the drag strip?

A new video from our friends at Drag Times shows us a heavily modified TRX going up against a Lamborghini Huracan EVO RWD. The tuned pickup weighs about 7,000 pounds (3,175 kilograms) but has more than 900 hp (671 kW) at the wheels. And let’s not forget that we are talking about 35-inch wheels here. The V8 engine under the hood has received a full upgrade package with a new throttle body, intake system, and many other components.

Obviously, these two contenders are very, very different. The TRX has more power and an all-wheel-drive system, but it’s significantly heavier. Also, they are very, very different when it comes to their price – even after the upgrades, the TRX costs less than $100,000, while the Lambo has an MSRP of about $268,000. However, at least on paper, the quarter-mile times of the two vehicles are almost identical, which means it’s going to be a very interesting race.

As you can see from the attached video, indeed, this is a very close battle. In the first race, as far as we can see, it all comes down to the reaction times at the start. In fact, all three races from the video are door-to-door, and it’s amazing that you can actually match (or even beat?) one of the finest supercars with a modified truck. Enjoy!