1937 Chevy Rules the Streets and Strip When your first job in 1963 is working at the local gas station, it’s easy to see the groundwork for a long path into the automotive world getting its start. For Preston Carden Sr. of Newark, Delaware, the sounds of a hopped-up V-8 was all it took to get his adrenalin flowing. Since the station was in a very busy area near Wilmington there was always a constant flow of the latest iron from Detroit making itself known on the streets, vying to see who would rule the region known as Hot Rod Alley.

Working alongside many of the area’s top mechanics, it wasn’t long till the older kids brought him to Cecil County Dragstrip to experience the scent of nitro and an endless stream of Gassers, Funny Cars, and ’Rails on a regular basis. That was all it took to propel his tabletop kit model building to the next level. It wasn’t long till he bought his first car, a 1955 Chevy two-door wagon, and from there it was all about high performance and camaraderie with his many hot rod friends. 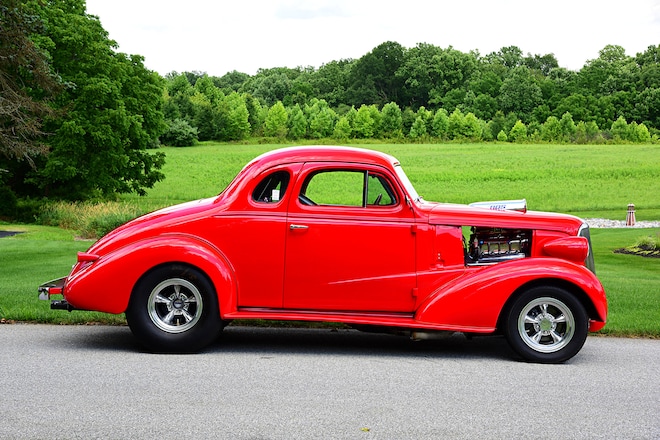 As the years passed there were many cars passing through the family garage, however Preston always hoped to build a double-duty hot rod that could make an impression on both the street and ’strip. He eventually began a search for an elusive 1937 Chevy coupe he had heard about. Finally, in 1980, a lead led him to a local farm where the former drag car was in a barn where it had been serving time as a chicken coop. A deal was made, with the chickens were relocated. The Chevy was pressure washed and hauled back to the family garage to begin its rebirth.

Once fully disassembled with help from his sons Preston Jr. and Brian, the trio got started by first blasting the frame clean. For added strength it was then boxed and treated to custom crossmembers. Out back a 1957 Pontiac rear spins 4.10 gears linked to Strange Engineering 31-spline axles and is suspended in place by a custom four-link, Panhard bar, and AFCO Eliminator coilover shocks. For a great stance and superior handling, a 1969 Chevy Nova IFS was narrowed 2 inches and refreshed with new factory parts, including springs and shocks. When it’s time to drop anchor a Corvette-style dual master pushes fluid through steel lines to 1957 Pontiac drum brakes out back combined with 1968 Camaro discs up front. Linking it all to the street are a set of American Racing Torq Thrust wheels, 12×15 in the rear and 6×15 in the front, wearing BFGoodrich rubber.

For plenty of ground-stomping power, Preston had Long Engine Works of Chesapeake City machine a 454ci Chevy big-block to perfection. The base was filled with a speed shop full of go-fast goods, including a factory steel crank linked to pink rods wearing Venolia forged aluminum pistons getting bumped by a Crower stick. A set of reworked factory rectangular-port heads make plenty of seamless power, especially when matched to a BDS 6-71 huffer fed by a pair of Holley 750-cfm carbs topped by a Hilborn-style scoop. An MSD ignition lights the fire and spent gases dump through 2-inch Hooker headers to a 3-inch custom steel exhaust with Flowmaster mufflers. A Chevy TH400 trans links to a custom driveshaft to move the goods.

When it came to bringing the vintage steel back to life the fiberglass tilt nose was removed and the body was blasted clean, revealing nearly perfect sheetmetal. John Tebbutt of Elsmere was called in to add a set of rear wheeltubs and massage the sheetmetal and set the gaps as well as fit new fiberglass front fenders and hood. To bring it all to life he then laid down a lustrous coating of PPG Torch Red, accented by striping and graphics by Jerry Campbell.

Inside it’s all business, starting with the factory dash filled with a custom insert cradling dials from AutoMeter to monitor the vitals while a 1965 Corvette steering wheel carves the course mounted to a matching tilt column. Shifts fly though a Hurst stick with a six-point chromoly rollbar added for safety. For comfort, Jesse Callaway of Wilmington reupholstered the factory seat in gray cloth while also adding complementing side panels and headliner accented by dark gray loop carpeting. Preston has been running the coupe hard on the street and strip since the ’80s with a best time of 10.90 at 127 mph on the quarter-mile, and to us that’s wicked cool.  SRM

END_OF_DOCUMENT_TOKEN_TO_BE_REPLACED

END_OF_DOCUMENT_TOKEN_TO_BE_REPLACED
We and our partners use cookies on this site to improve our service, perform analytics, personalize advertising, measure advertising performance, and remember website preferences.Ok