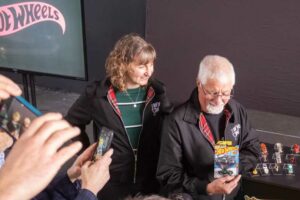 Mattel and Hot Wheels recently brought the tools and people who work in their Los Angeles design studio to New York City to walk us through the process of transforming the recent 2021 Hot Wheels Legends Tour-winning, life-sized custom car into a collectable die-cast model. We’ve had one of our RoadKill cars turned into a Hot Wheels car already, but it was nice to get a refresher for this year’s winner: A green 1969 Volvo P1800 “Gasser” drag racer from the U.K. was selected to become the next 1:64 scale die-cast Legend.

Ted Wu, VP and Global Head of Design for Vehicles at Mattel, Inc. and his team went over the overall design process for the toy version of the latest winner in the Hot Wheels Legends Design Tour competition. This year’s winner is Lee Johnstone and his “Ain’t No Saint” custom Volvo P1800, registered in 1969, which was recently featured on Jay Leno’s Garage.

Lee Johnstone has been working on and building custom cars for nearly 50 years, with a taste for Jaguars and other old English and European cars, and a soft spot for Corvettes that would go on to inspire this build. This custom Volvo P1800 came to Johnstone around six years ago, when he and a build partner were looking for a new project, and the rusty shell of what would become a Legends Tour winner came up on eBay for around $1,100 bucks.

They cut off a large chunk of the front, side and rear body panels for rust, leading to the wide-open face of the final project. That left Johnstone plenty of room for customization, and being inspired by Corvette “gasser” drag cars, he even mounted a functioning gas tank right on the nose where the body was cut away, which made its way onto the Hot Wheels model, too.

The shell was propped on a new custom chassis, with a 454 Chevy block thrown in with a “pair of demons” on top, linked to a Turbo 400 transmission and good for what’s been estimated to be around 650 horsepower. Johnstone says the car was built and racing within 18 months, setting a 10.01-second quarter-mile drag run at his local Santa Pod raceway in Podington, England. He’s also blown up the engine, but has since had it rebuilt.

Fans of the late Sir Roger Moore or classic television will get the name of this build, “Ain’t No Saint,” as a reference to the 1960s show The Saint, which featured the Volvo P1800 as the lead character’s car, who was known as “The Saint.” Sadly, licensing for the fun name couldn’t be acquired by Mattel, so “Hot Wheels” will be printed on the side of the die-cast model instead (though the real-life car will keep its original moniker).

Once Johnstone’s “Ain’t No Saint” was selected out of an international lineup of entries, Mattel and the Hot Wheels team recreated the car from scratch in their computerized design studio. They typically start with a few sketches and measurements, and then begin work on a digital ball of “clay” to sculpt from in the computer, just like real car designers sculpt early design models out of clay in the real world.

In the demonstration, we were roughly shown how a smooth ball of digital clay is manipulated, using a real-world pen device that gives direct haptic feedback to the designer’s hand, offering a sense of 3D space represented by what’s on screen. The digital clay is worked into a predetermined number of parts for each build that ultimately stack to form the final car.

From there, each element of the “sculpt” goes through a 3D printer-the designers seemed to mention both SLA and MSLA printing methods-where an early impression of the vehicle’s shape, dimensions, rough coloration, and general detail accuracy can be measured before shipping off to the production line in Malaysia. Some special Hot Wheels lineups, like the Red Line Club, are sometimes assembled on a separate line capable of higher fidelity.

This is where some creative license is warranted, either to keep the vehicles within required dimensions, or to ensure the final models avoid looking “weird,” which “can happen” when scaling down models of real-life objects, designers told us. The production samples go through final quality assurance, safety and legal clearances (for stuff like choking hazards), and double-checking for accurate details like the small gas can mounted on the front of the “Ain’t No Saint” Volvo. Then it’s off to a bit of surprisingly rigorous torture testing.

Yes, even a new Hot Wheels model undergoes rigorous track testing before it’s greenlit for production. As you can imagine, the company does have a strict set of dimensions it must design against, to make sure each new model can fit within the various track sets the company sells alongside its cars. (Those dimensions need to be within roughly 3.2 inches long, 1.22 inches wide, and 1.4 inches tall.)

Testing is more challenging than you might think, considering the variety of track accessories the company has developed over the years. The final model has to have enough ground clearance, including ample approach and departure angles, to get through the various twists and turns of a Hot Wheels orange track play set.

The model has to be able to perform a full loop, get through a tunnel, and be able to easily utilize track features like side-gripping boosters and rear striking panels for various toy track mechanisms working against it. The models even undergo drop testing for durability. Some super-special car models even get adjustable features, like side skirts that can raise up, to make sure they are playable through Hot Wheels sets.

Johnstone’s P1800 has survived everything the real-world and Hot Wheels has thrown at it, making it a deserving winner, and you can look into getting your own model, and more info about the Hot Wheels Legends tour, on the Hot Wheels website.