The popularity of adventure motorcycles in India is on the rise. These breed of motorcycles are practical, offer relaxed riding and can take on the occasional rough stuff too, should the need arise. But, owning an adventure bike would mean nothing if you can’t extract the best performance out of your motorcycle. Because, believe it or not, no matter how capable you become, your motorcycle will always have something more to offer. And this is where the BMW GS Experience comes in. BMW Motorrad has a wide range of adventure motorcycles on sale in India starting from the G 310 GS, F 750 GS, F 850 GS, F 850 GS Adventure, R 1200 GS , R 1200 GS Adventure and the new R 1250 range as well. All these motorcycles are quite capable when it comes to going off-road. But are you? Well, I am definitely not! But, one can always learn. 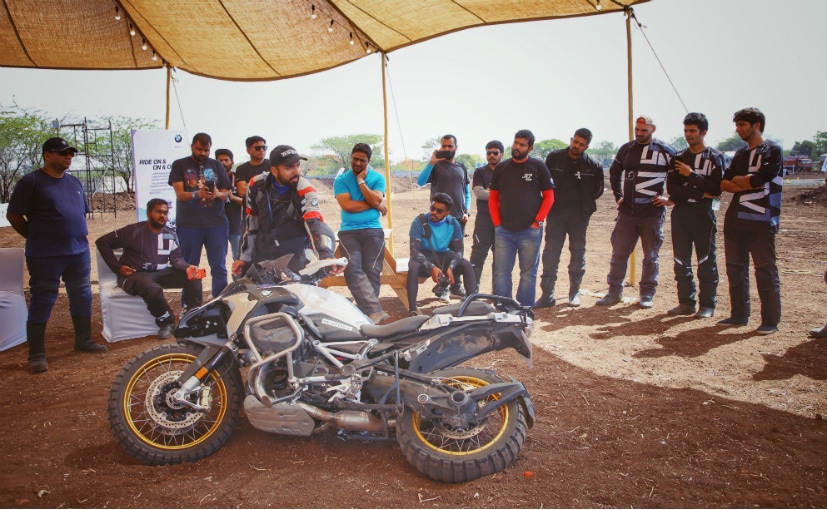 (The off-road experience started off with an hour long theory session, where we were made familiar with basic rules of off-road riding)

Our instructors for the day were Shahnawaz Karim and Ajit Bhardwaj, both off-road veterans and skilled humourists as well. The sun was bearing down hard even at 9 am and the first instruction that we received was to keep ourselves hydrated at all times. Before we geared up, we were made familiar with the entire range of BMW’s GS motorcycles. The suspension was set at its softest and the tyre pressures dropped low to offer more traction on our training grounds which was mostly loose mud! Very loose mud! We were asked to put the bikes in enduro mode which shuts off the ABS and traction control. 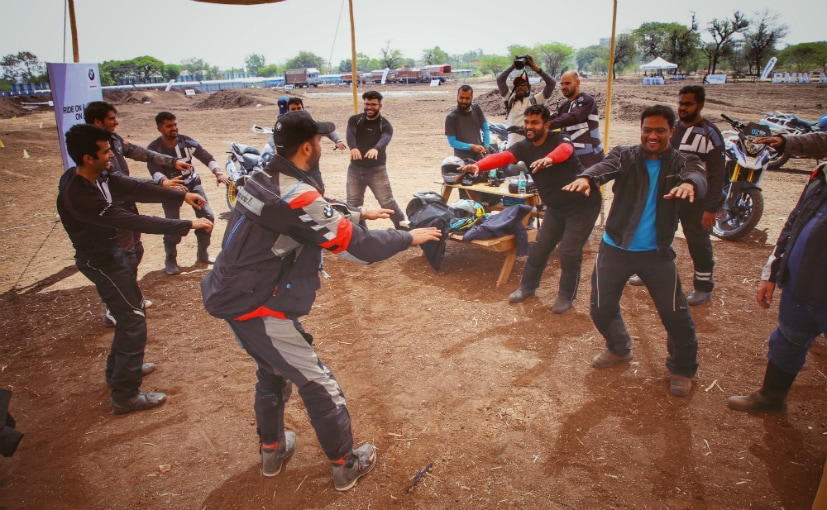 (It may seem like dancing, but we are actually warming up before we gear up)

Up next was tips on getting the body position right! Especially, when one is standing up and riding. The right way to do it is to stand up straight, lean forward a little and grip the fuel tank with your knees. Also, gripping the tank will come naturally when you point your toes inward on the footpegs. Doing so will take the weight off your arms and keep your shoulders relaxed. The more you keep your arms and shoulders relaxed, the lesser jerks will travel up to your head, keeping it in place. So, with the theory lessons done, it was time to gear up and get on the saddle. 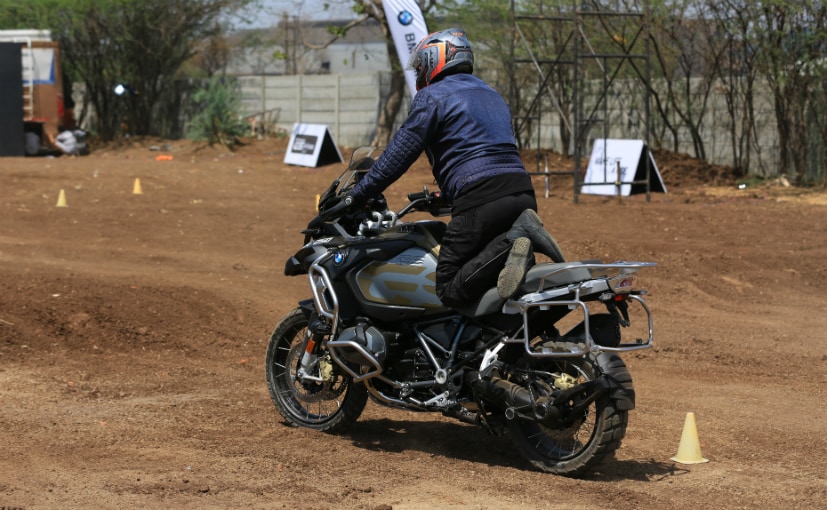 (Yes! Riding the R 1250 GS with both feet on the seat was an exercise in showing us the importance of controlling the bike with the lower body )

The idea was to start simple, get comfortable with the bikes and then move on to doing the heavy stuff. Like always, I was the last one to gear up and while others made a scramble for the lighter bikes, I was left with a BMW R 1250 GS, a hulking piece of motorcycle machinery. Little did they know that I would be having the last laugh! Our first exercise was to just ride the motorcycles in circles. And while it may seem simple, the terrain made it supremely difficult. The loose mud offered little to no traction and even though our bikes were shod with off-road tyres, people kept dropping like flies, especially the one with the lighter bikes. The heavier bikes, such as the R 1250 and the F 850 just kept ploughing through. 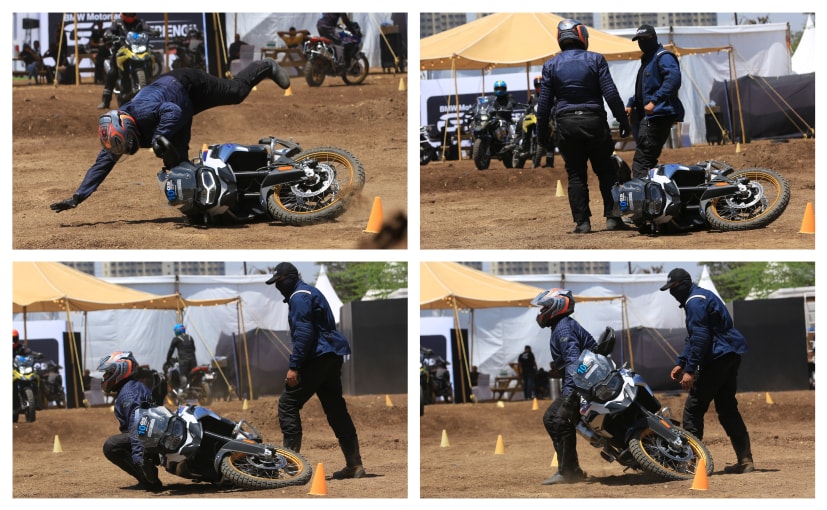 (Picking up a big ADV is not very difficult, provided you do it right)

I obviously did it wrong at first, gripping the handlebars tightly and thereby tiring myself out. Ajit saw that and told me to consciously grip the tank and let the hands and shoulders be loose. It worked like a charm. The front end was going wherever it liked and every time it felt as if I will lose the front end, it came back and the motorcycle kept going forward. And just like that the first burst of jubilation came in. The second exercise was to ride the motorcycles with one and both legs on the seat. Riding with one leg on the seat wasn’t as difficult but with both legs on the seat! Well, it was downright scary. The purpose of this exercise was to demonstrate the very important fact that it is best to control the movement of these heavy ADVs with your lower body and let your upper body relax. 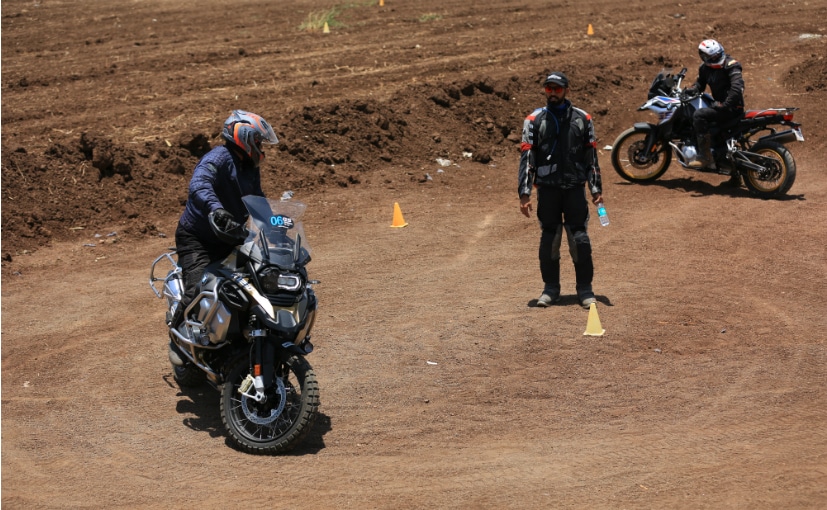 (One of the toughest exercises was to ride around in circles, with the handlebar fully locked to one side, looking at the instructor. This was meant to help us learn manouevre our bikes in tight spaces)

The next exercise was to work the motorcycle through the slalom course and while this was supposed to be one of the easier exercises, I lost my concentration on the second run and dropped the bike! While the fall wasn’t dramatic, Azam the cameraperson did manage to capture the fall in quite a dramatic manner. The idea was to learn to navigate your motorcycle around obstacles with minimum effort and inputs and control the movement of the bike with the legs and the hips. 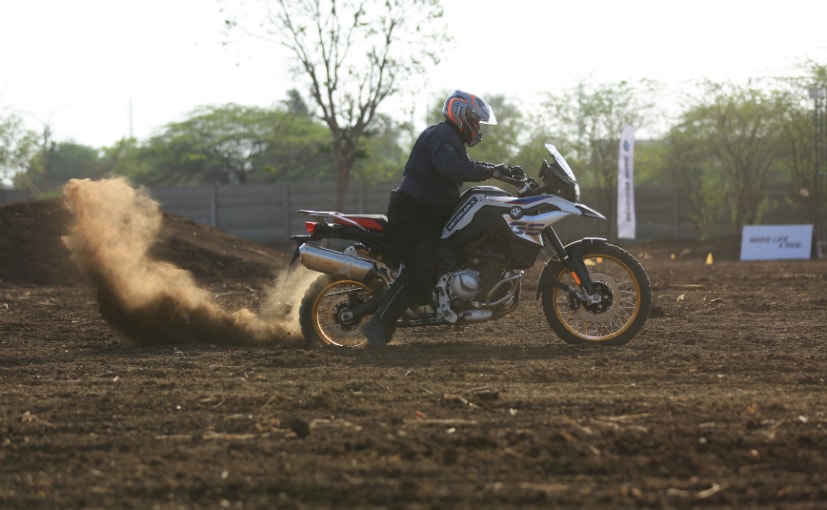 Up next was riding the motorcycle through a deep rut and this is where quite a few journalists dropped their bikes. Again, it looked simple but in fact was an exercise in maintaining vision. One must always look far ahead, rather than looking closer to the bike. The further you look, the better your line will be and the smoother the ride/exit will be. 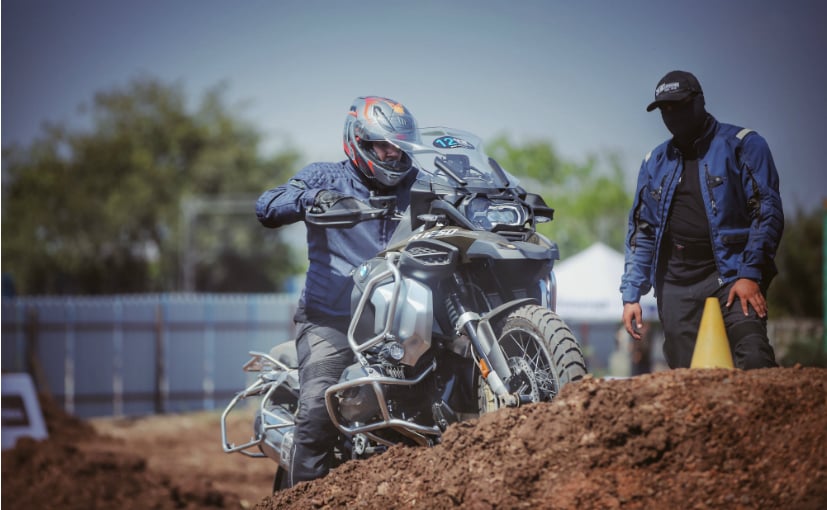 (Recovering a stalled ADV on a slope was tough, but a useful exercise)

If you are riding an adventure motorcycle, especially on hills and slopes, there might be a situation where you stall your motorcycle, on a slope. The idea behind this exercise was to teach to teach how to safely control the bike and slowly climb down with the help of just the clutch. So I hopped on to my bike, climbed up the slope and killed the engine at the crest with the bike in gear. Then, move your upper body forward, push your feet behind, get a firm footing and without starting the bike, press the clutch so as to disengage the gear and let the bike gently roll. Keep the clutch movement smooth so that the bike rolls down smoothly. Also, the idea is to press the clutch intermittently and take the bike down not all at once but one step at a time. 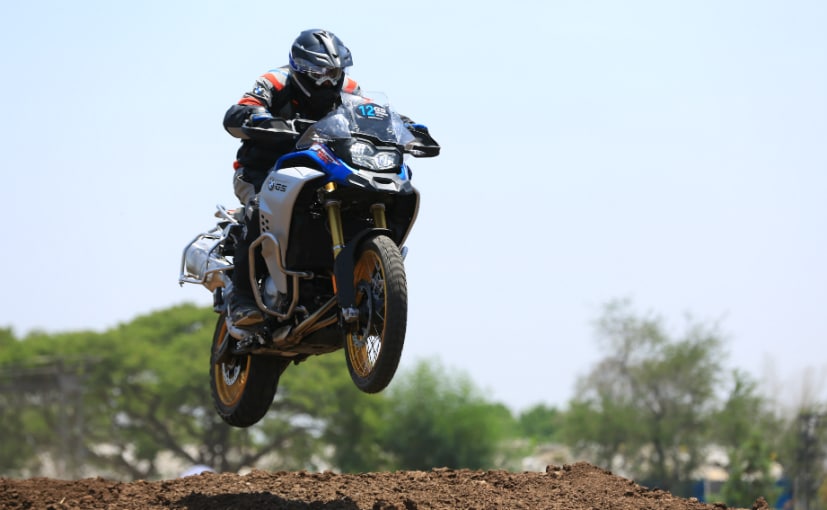 (Our instructor, Shahnawaz Karim, putting the BMW F 850 GS Adventure through its paces)

So, after a full day of learning how to ride off-road, I definitely feel that I have become more confident and better equipped to handle tough terrains on big ADVs. Everytime I did an exercise right, I got this huge confidence boost which motivated me to do more!