We knew it was just a question of time before the designers and engineers at FCA would apply the widebody treatment to the Charger. Well, at the FCA During the “What’s New” media event at the Chelsea Proving Grounds, the wraps finally came off.

The Charger SRT Hellcat already lays claim to be the most powerful and fastest production sedan in the world with a top speed hovering around 200 mph and e.t.’s below 11 seconds. But the new widebody package reinforces Charger’s unanimous title among casual and hardcore enthusiasts for being America’s only four-door muscle car.

The funny thing is we sort of caught a whiff of the Charger widebody over 16 months ago, and in plain sight. Unaltered cellphone images began to appear on the internet of a Charger engineering mule vehicle with substantially radiused front fenders, rear quarters, and with no wheel flares, running around FCA’s world headquarters in Auburn Hills, Michigan. The unofficial word was that the purpose of the vehicle was to season or heat-cycle the massive 315/40R/18 Nitto drag radial tires for testing on Challenger SRT Demon engineering prototypes. 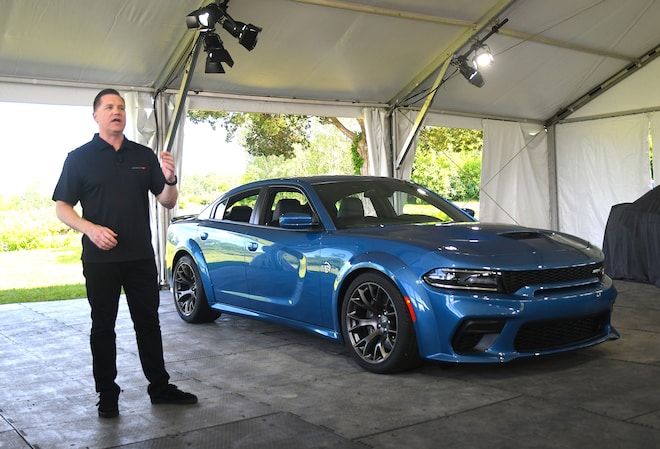 OK, sounds logical enough, but those in the late-model Mopar community began to speculate that this Charger mule was indeed a sign of a future model to give new life to an already aging platform. The four-door Charger’s bones has been around for over a decade, yet it has been updated over the years with numerous engine, chassis, suspension, driveline, and technology improvements. Despite being an “old” platform, the Charger has done well in a market that is shrinking by the month as more new car buyers feel the need to drive pickup trucks, SUVs, and even those god-awful CUVs. But for gearheads who need four doors to appease their spouse and keep the kids safe and comfy while hauling all their stuff, the Charger has filled that small but all-important niche market segment extremely well. The numbers also don’t lie either: Charger has been the sales leader in the U.S. fullsize car segment for five straight years. That’s why the automaker took a page from the Challenger widebody playbook to create a Charger widebody from an engineering and marketing execution standpoint. The 2020 Charger widebody will come in two flavors: the Hellcat and the Scat Pack. Or for you motorheads, Blown or Naturally Aspirated. Let’s begin with the Charger SRT Hellcat widebody. It comes standard with the badass supercharged 6.2L Hemi V-8 engine pumping out 707 hp and 650 lb-ft of torque. Now, before you ask, the Charger widebody is not available with a manual trans, so forget about it. I know it’d be cool to row this big cat around town grabbing gears, but in reality the business case doesn’t support the investment. What is cool is the Charger widebody’s aggressive stance thanks to those meaty Pirelli 305/35/ZR20 tires mounted on 20×11 wheels tucked under the integrated fender flares that add 3 1/2 inches of body width to the Charger. While some might think it looks fat, the Charger widebody looks very curvy, sensuous, and angry—all at the same time. Hauling down the Charger Hellcat widebody are Brembo six-piston front calipers with two-piece brake rotors. 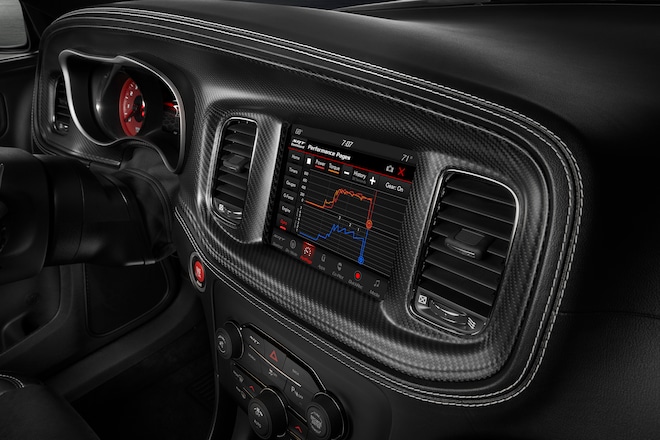 Making sure the Charger SRT Hellcat widebody goes right and left when commanded by its driver is Bilstein three-mode adaptive damping that can be tuned at your fingertips from the SRT Drive Modes located on the 8.4-inch Uconnect touchscreen. More tuning goodies you can swipe through include the numerous settings for Street, Sport, and Track, along with Custom settings for you to get lost in. There’s also more stiffness underneath because the Charger widebody’s front spring rates are 32 percent stiffer than its non-widebody cousins and sway bar diameter goes from 32 to 34 mm in the front, and 19 to 22 mm in the rear. If you want to hit a test-and-tune night at your local dragstrip or attack a road course at some Gridlife event, the Charger widebody has your name on it.

Dodge claims that the Charger SRT Hellcat widebody will reach 60 mph in 3.6 seconds and cover the quarter-mile in 10.96 seconds. After spending much time in these late-model machines, there’s probably a lot more left in this 4,400-pound machine that a pair of Mickey Thompson DOT drag radials could fix in a hurry. 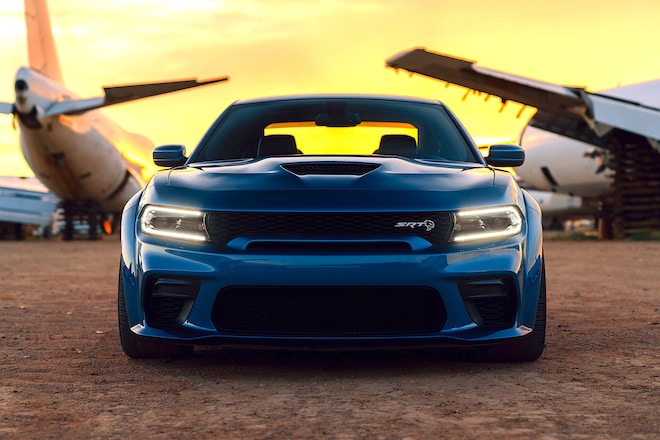 If money is no object, then just step up and get the Charger SRT Hellcat widebody. If the whine from its blower isn’t enough to overcome any buyer’s remorse, there are cool and unique items to enjoy, such as the Race Cooldown feature that actually keeps cooling the supercharger/charge air cooler after the engine is shut off via by running the intercooler pump and radiator fan. If you like doing burnouts (and who doesn’t?), know that both Charger widebody models come with a Line Lock to punish the Pirellis tires. There’s also Launch Control and Launch Assist, the latter of which uses wheel speed sensors to catch that bone-jarring wheelhop you sometimes get with high-horsepower cars when trying to launch them at the strip. 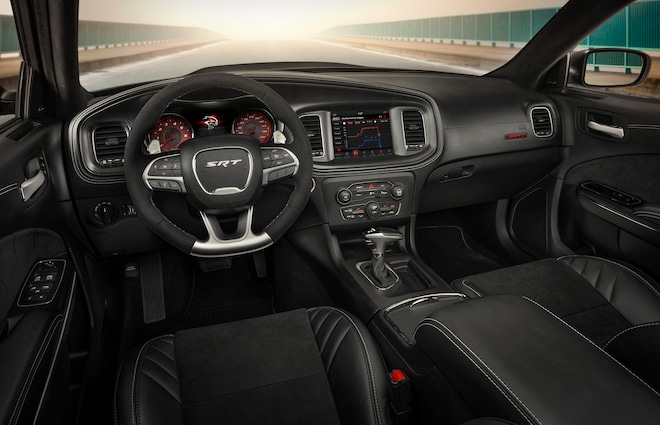 Both the Charger Widebody models come nicely equipped. It might scream All-American muscle on the outside, but on the inside the Charger Hellcat widebody’s interior rivals some of Europe’s snobbiest brands because the Hellcat comes with heated and ventilated Laguna leather front seats that feature embossed Hellcat logos. An assortment of interior color combinations includes Black, Black/Sepia, and Black/Demonic Red. For those living closer to Santa’s workshop in the North Pole, the Charger Hellcat widebody’s heated, leather-wrapped SRT flat-bottom steering wheel will come in handy on cold mornings. Both widebody Chargers have paddle shifters, but it’s not quite the same without your left foot working a clutch pedal. There’s also new exterior colors for 2020 including Hellraisin, Sinamon Stick, and Frostbite that actually looks a bit like B7 Dark Blue Metallic in the right light. Safe to assume that Dodge has the best color palette going among all car companies these days. 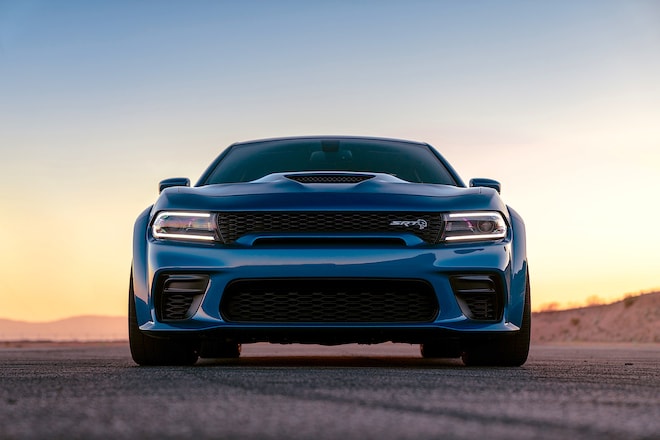 If the 2020 Charger Hellcat and Scat Pack widebodies spark a desire to own a fast four-door “family car,” your friendly Dodge dealer will be able to take your orders starting this fall. Look for these widebody pavements pounders to hit the streets early next year.