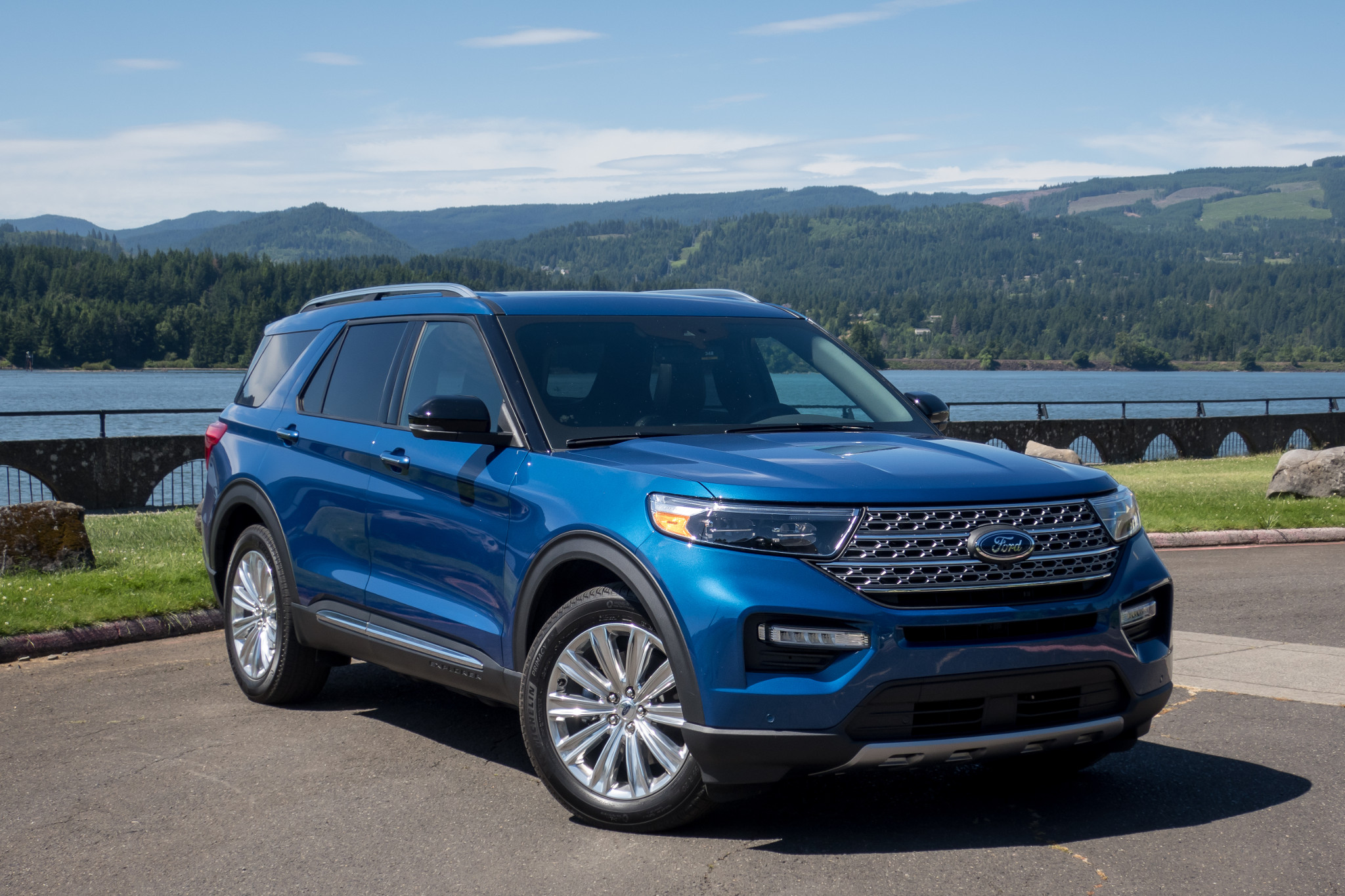 With 2019 being a really big year for three-row mid-size SUVs, Ford had to give the redesigned 2020 Explorer big changes to keep up with a tightly packed class including two new South Korean entrants: the Kia Telluride, which is awesome, and the Hyundai Palisade, which I’ll be testing soon. And big changes it got, with the 2020 Explorer receiving a full redesign that includes a new rear-wheel-drive platform (replacing its front-drive-based structure), plus updated styling and two new trim levels.

Those new trims are the Explorer Hybrid and performance-focused 400-horsepower Explorer ST, which I tested alongside the top Explorer Platinum trim around Portland, Ore. (Per our ethics policy, Cars.com pays for its own lodging and airfare at such automaker-sponsored events.) I’ll have more on the ST later this week, but for now I’ll focus on the gas and hybrid versions.

I drove the Explorer Hybrid from Portland all the way back down the West Coast to Los Angeles, and along the way got very acquainted with it, finding a few things that bothered me — some that went away and some that stuck around.

How the Explorer Hybrid Drives

Ford calls the Explorer Hybrid a “no compromise” vehicle thanks in part to clever packaging that hides the 1.5-kilowatt-hour battery underneath the passenger seat in the second row. The Explorer Hybrid has the same cargo and passenger room, wading depth and ground clearance of the gasoline models — an impressive claim.

An electric motor and a 3.3-liter V-6 work together to produce a combined 318 hp and 322 pounds-feet of torque. It comes with a 10-speed automatic transmission, using the same gear ratios as the one found in all Explorer models (ST included). Rear-wheel drive is standard (as my test vehicle was), with all-wheel drive optional.

Though the Explorer’s interior and exterior dimensions aren’t compromised, the driving experience seems to be. Ford says the electric motor can produce 221 pounds-feet of torque by itself for assisting launches, but the transition from electric to gasoline power isn’t smooth. It sort of drives like hybrids used to; there are weird surges in power and some accelerator lag, which stands in stark contrast to Ford’s excellent EcoBoost engines (either the base turbocharged 2.3-liter four-cylinder or the turbocharged 3.0-liter V-6). Those were much more linear and responsive, especially from a stop.

The Hybrid performs much better once it gains momentum, where the powertrain feels more responsive between 20 and 60 mph. Jumping up a quick 20 mph to pass or shoot up an on-ramp is cleaner and more predictable. The problem is that you generally do a good amount of stopping and starting while driving, and even swapping through the Explorer’s drive modes didn’t help its off-the-line slip-ups. It’s also worth noting that the Hybrid’s V-6 sounds coarse and gets quite loud as it revs, reminiscent of older four-cylinder engines.

The Explorer Hybrid’s braking system needs work, too. There’s an off-putting initial grabbiness, and the natural tendency is to ease off the pedal when you feel the initial grab being too harsh. For the first couple of days, all my stops felt abrupt and I was stopping a few feet past where I targeted. I thought I might adapt after putting a thousand miles on the Explorer Hybrid, but I think I would still only call it “passable” at this point.

It’s hard to say if my greater qualms with the hybrid variant’s driving experience are worth it because Ford doesn’t have official fuel economy figures yet. The Platinum is EPA-rated at 18/24/20 mpg city/highway/combined. On my 1,000-mile drive of mostly highway driving, the computer reported 24.9 mpg for the trip, and our calculated data was 23.9 mpg. The problem is that the EcoBoost 2.3-liter is just 1 mpg off that (23 mpg combined) and cheaper to boot, so it doesn’t seem like the 2019 Toyota Highlander Hybrid (up to 29 mpg combined) where you get a pretty sizeable differentiation in fuel economy between the regular and hybrid. I don’t think the Explorer’s 23.9 mpg does it for me.

All Is Righted With the Explorer Platinum

The Explorer Platinum solved both issues of going and stopping. Its 365-hp, turbocharged 3.0-liter V-6 makes 380 pounds-feet of torque and is a happy, eager engine. All-wheel drive and the 10-speed automatic are standard, and the Explorer jumps off the line up to passing speeds with great ease. Not only is the powertrain more robust, the Platinum weighs 242 pounds less than the Hybrid, and the total experience is much better for it. And it has a more traditional feeling brake pedal, which I appreciated.

There was congruency between the Platinum and Hybrid’s suspension and steering feel. The Explorer’s steering feel was my favorite part — it comes with sufficient weight and feedback, and I never felt disconnected from the road, which was important because the suspension allows a lot of body roll. With the move to a rear-drive platform and the softness in the suspension, the new Explorer drives more like a truck than the old one. You can feel the weight of the vehicle shifting in turns, especially over the rear wheels. The Platinum feels more planted since it doesn’t come with the Hybrid’s low-rolling resistance tires that don’t inspire the same confidence (and are louder to boot). When driving straight, however, the softness of the suspension does make it comfortable — but my coastal route down Oregon and Northern California has a lot of winding roads on very high cliffs, which made for light treading.

The Explorer comes with standard captain’s chairs on all trim levels except the base model, which Ford indicates is “fleet order only,” so in essence, the Explorer only seats six occupants. Both second-row seats have a good amount of forward/back travel, so legroom can be negotiated with third-row passengers and there’s an easy release button on the top of the seats that tilts and slides forward for access to the third row. Ford also included a textured step mat on both sides so you know right where to put your foot to climb in — a thoughtful touch.

Less thoughtful are the seats themselves, which are not that comfortable and need more supportive cushioning. The bigger issue is that they lack bolstering and come covered in pretty slippery leather on Limited and up models, and on any kind of curvy road, I could see our videographer behind me sliding from side to side.

The third row has rather good headroom. In fact, there’s great headroom all around even with the dual-pane panoramic moonroof — it feels quite airy inside. I’m just under 6 feet tall and if you lined up three of me in each row of the Explorer, legroom would be tight but you could figure it out for shorter journeys; for longer trips, find a shorter person to mix in there. The biggest issue with the third row is the floor height. The Explorer moving to RWD seems to have raised the cabin floor so it only sits about 6 inches below the seat cushion, and when you sit back there, it feels like your knees are hovering in your chest.

The flashiest change for 2020 is the new 10.1-inch, vertically oriented touchscreen, offered as an option over the standard 8-inch screen. There isn’t a huge difference in size between the two, but thanks to its orientation, the 10.1-inch screen feels a lot bigger (and takes up a lot more space on the dash). Kudos to Ford for installing a big screen and making it easy to reach from both front seats. The native navigation and menus look much better, too.

There is an exception however: Android Auto and Apple CarPlay integration. Like other vertically oriented systems, the Explorer splits the screen when those technologies are displayed, leaving the bottom half of the screen for other features. The taller screen is rather skinny, so it makes the integration look small and is actually hard to use — some of the icons were too small to easily hit. Compounding this is that when you activate either system, a large bar titled “Android Auto [or Apple CarPlay] Settings” annoyingly takes up about an inch of the screen’s real estate. I preferred the standard screen that ends up displaying a larger Android Auto and Apple CarPlay display than when these are used on the larger screen.

Will It Be Enough?

I don’t think the new Explorer is bad. Far from it — I think it looks good, it has excellent powertrain variety, and its safety features (especially the lane centering) work quite well. But the margin for error in this class is growing increasingly thin. Our Best of 2018 winner was another three-row SUV, the 2018 Volkswagen Atlas. The Telluride is incredible, with our reviewer calling it “the new big SUV benchmark.” And Toyota has a new Highlander on the way for 2020, with a hybrid model of its own.

Where I think the Explorer will really run into problems is its price. The Hybrid Limited model I tested was $57,265 (including destination charges), and it doesn’t even come with the larger multimedia screen or the attractive 12.3-inch digital instrument panel. The Explorer Platinum was even more expensive: $61,330 after adding the Premium Technology Package with the 10.1-inch screen.

For perspective, the practically loaded Tellluride I tested was $46,860 — about $10,000 less than the Hybrid, and the Telluride has better materials and a larger cargo area. The Atlas tops out around $51,080. That’s a gigantic price gap, and the Explorer would need to be exceptional to make up for it. The problem is, it just isn’t. 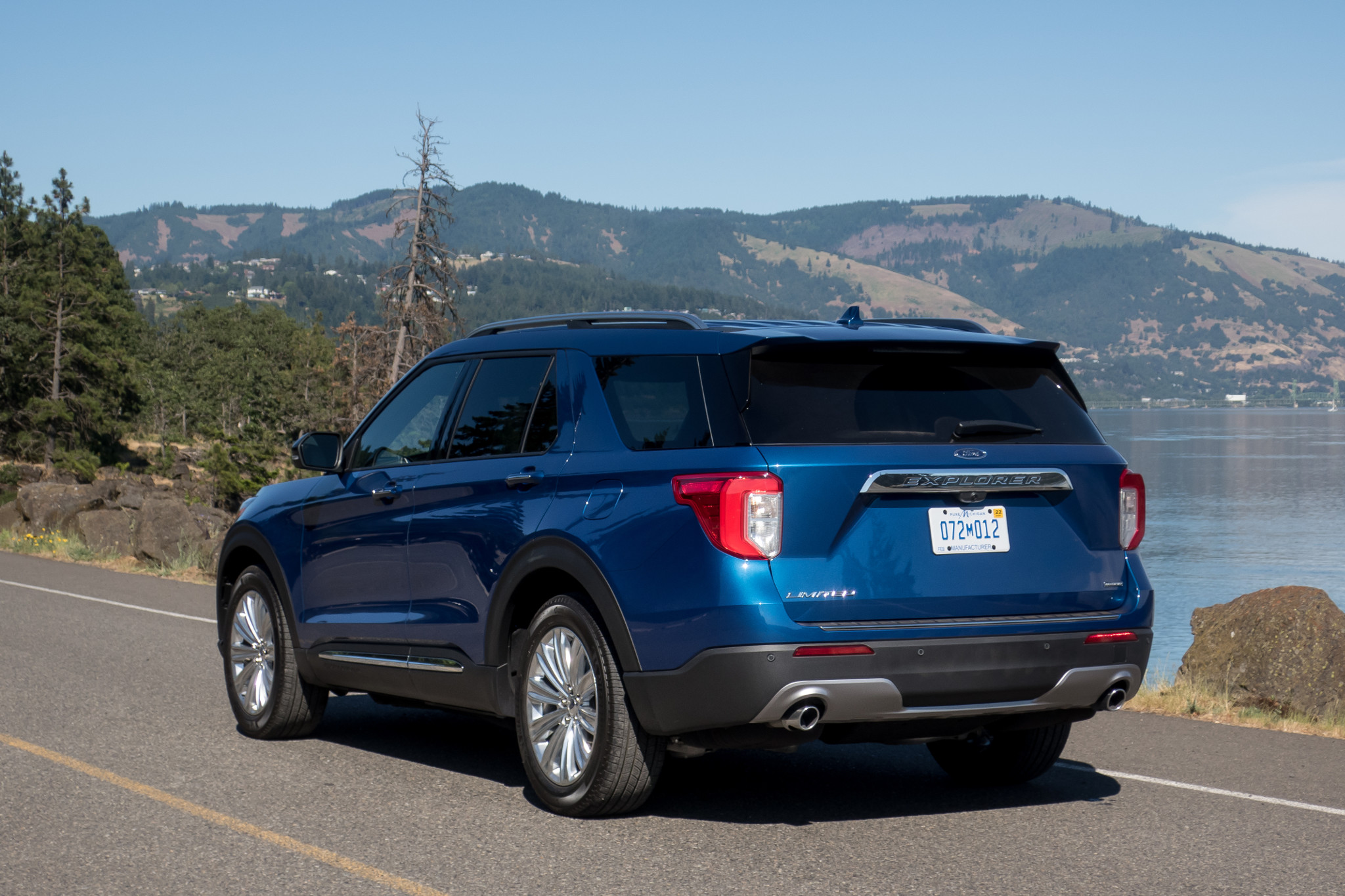