Verdict: The Honda Pilot’s age is showing, and though it retains some strengths (storage space and value), what it really needs to catch up with its class are updates to its technology and interior.

Versus the competition: The Pilot isn’t a bad vehicle, but in a class this cutthroat, average isn’t good enough.

Much of the context we use to evaluate a vehicle comes from the rest of its class, and a strong set of contenders makes success an uphill battle, especially for a model that hasn’t been redesigned in a while — such as the 2020 Honda Pilot three-row SUV. The Pilot did get a refresh for 2019 that focused on updates to the multimedia system and the powertrain, both pain points that needed to be improved. A year later, we put the 2020 Pilot (which is basically identical, save for a new trim level) through its paces in a rigorous competition against six other three-row SUVs, and the results of our 2020 3-Row SUV Challenge were not flattering for the Pilot: It ranked last our of seven vehicles.

That said, not all last-place finishes are equal. The distance between the Pilot and the sixth-place Chevrolet Traverse was just 3 points, and the fifth-place Subaru Ascent was only 2 points beyond that — on a nearly 600-point scale — making it a virtual tie among these three vehicles. Unlike some last-place finishers in other Challenges, I think you could own a Pilot and be happy with it; it still has merits, though its age is showing in this rapidly changing segment. Atop our challenge were the Hyundai Palisade and Kia Telluride, two brand-new models that feel like evolutions of the Pilot.

The Pilot’s biggest change for 2020 is the addition of a Black Edition, which now sits atop the model hierarchy. That gives the Pilot six trim levels: LX, EX, EX-L, Touring, Elite and Black Edition. The Black Edition is mostly an appearance package designed to make the family hauler look more menacing, though why you’d want that is a question I cannot answer. Our test vehicle was an Elite and, as such, came with most of the features you can get on a Pilot, no additional accessories and a sticker price of $49,215 (including destination charges). 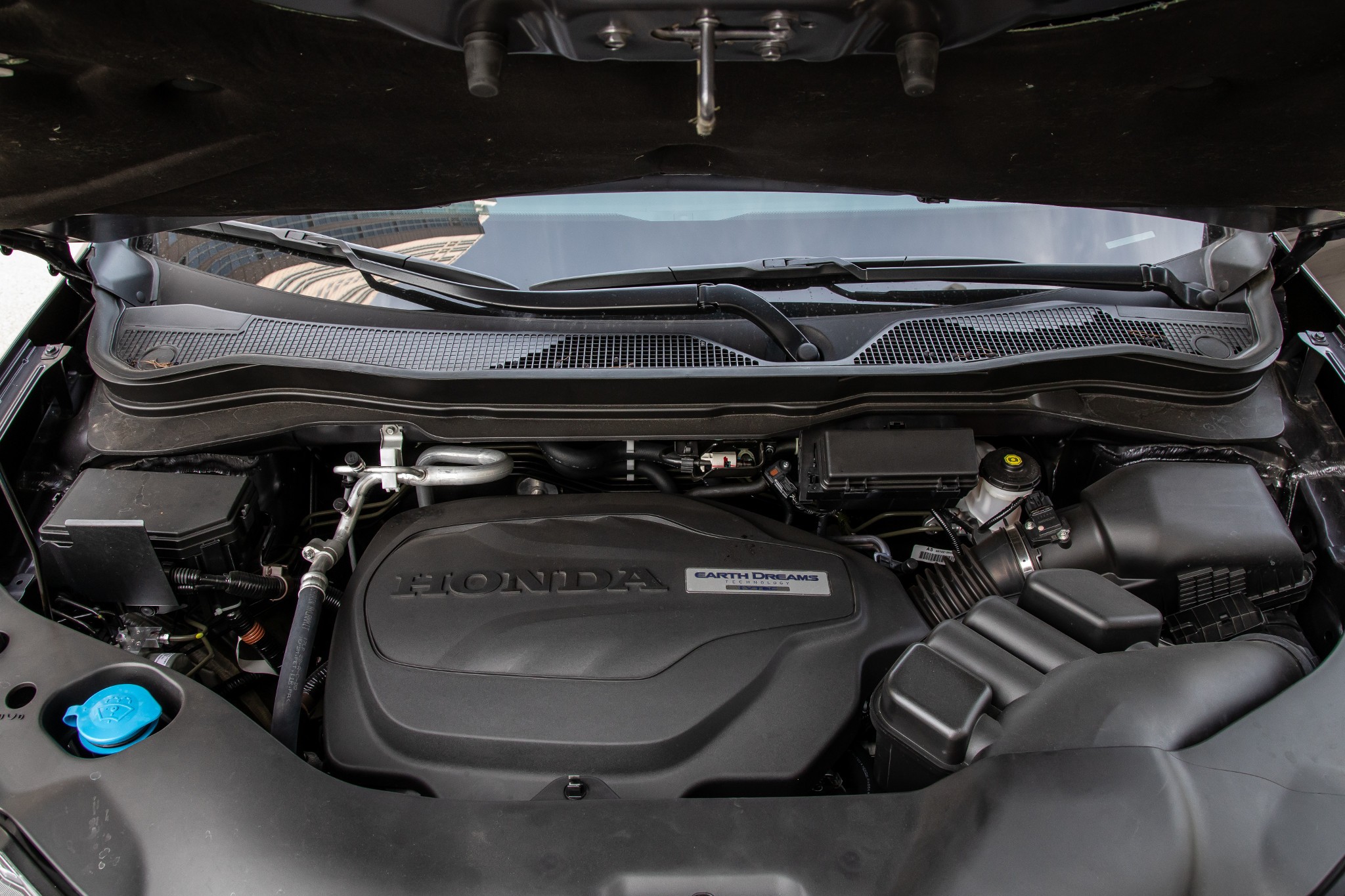 Under the hood is a 280-horsepower, 3.5-liter V-6 that makes 262 pounds-feet of torque. Front-wheel drive is standard and all-wheel drive is a $2,000 option on all models up through the Touring (AWD is standard on the Elite and Black Edition). There are two available transmissions: a six-speed automatic on the EX-L with navigation and below, and a nine-speed automatic on the Touring and above. The nine-speed was the focus of many of the 2019 changes, and driving it a year later, I’d say the changes worked for the most part. The Pilot starts smoothly and is a bit more responsive in passing maneuvers. It won’t ever rip off shifts or approach anything resembling fun, but in this vehicle class, there’s a baseline of powertrain competency we’re looking for and the Pilot meets it.

The Pilot is more than qualified for day-to-day duty as its ride quality and overall comfort are enough to get by. At highway speeds, the cabin isn’t quite as isolated and you can hear a good amount of wind and road noise, but it’s still easy enough to hold a conversation. Steering is on the numb side, but at low speeds, the level of resistance drops nicely, making the Pilot easier to navigate around parking lots and driveways. If I had to sum up the way the Pilot drove, it is, in a word, fine — which is less of a slight than you’d think.

This is where the Pilot really shows its age, especially with its styling. The dashboard is awash in black plastics, and combined with the black leather upholstery in our test vehicles, it looked like it was styled by Darth Vader. Interior materials fall behind the best in the class, though the front seats remain quite comfortable for both short and long journeys. Another highlight from the front of the Pilot is a large storage bin between the seats and a large wireless charging pad.

The Pilot’s second row offers a helpful quick-release button on the back of the captain’s chairs, which come standard on the Elite, providing seating for seven. (All lower trim levels come with a bench seat standard, adding a center position and boosting maximum seating to eight occupants; the quick-release button is available with bench seats on the EX trim and above.) A quick press of the button folds and slides either seat forward for easier access to the third row, and the seats require little effort to move around. Once you get back to the third row, it’s a bit tight and has a high floor, though headroom is actually pretty good. It’s not a place to keep adult-sized passengers for longer trips, but it’ll do in a pinch.

For younger passengers, meanwhile, the Pilot was one of the two lowest-rated vehicles in the Challenge when it came to accommodating child-safety seats, scoring a few B grades and two C’s to go along with three A’s in our Car Seat Check. For comparison, the Pilot’s top-rated competitor in this category, the 2019 Volkswagen Atlas, got straight A’s.

Like the transmission, the Pilot’s multimedia system got an upgrade in 2019 — but while it’s improved, it isn’t fixed. The addition of a volume knob removed a major annoyance, but the system is still convoluted and hard to use; simple tasks can feel anything but. Thankfully, Android Auto and Apple CarPlay are standard on every Pilot with an 8-inch touchscreen. Whenever I got in to drive the Pilot more than a few minutes, I plugged my phone in immediately.

There are a few pain points with these systems, which all worked as advertised but lacked some of the features you’ll find in some competitors. The adaptive cruise control system doesn’t work at low speeds; dip below 20 mph and it just shuts off, making it less useful for anyone stuck in slow-moving traffic. Similarly, the lane-keeping system does a good job keeping you in your lane but doesn’t feature the more precise lane-centering, so the Pilot kind of bounces between the lines without more intentional intervention.

We also found that the forward automatic braking system registered many false positives in a variety of situations. For whatever reason, the Pilot would be driving along uneventfully when suddenly a big red “Brake” notification and a loud series of beeps would disturb the peace. This happened in traffic, out of traffic, with no other vehicles around, on city streets and on the highway. The Pilot didn’t actually brake itself, but the alerts were an annoyance — one that could lead people to turn the system off, which defeats the purpose of having it.

The Pilot’s last-place finish in our Challenge feels harsh. It really isn’t a bad SUV, and its score was very close to the two vehicles that finished directly ahead of it. But compared with the upper half of finishers in the test, the Pilot fell short in pretty much every category. It really needs to step up its game if it wants to rise to the level of the Palisade and Telluride and become competitive again. A higher-quality interior and improved multimedia system would be great places to start.