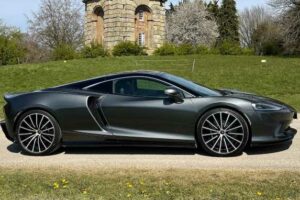 Am I doing this right? For the first 2,211 miles of my “ownership” (long-term test) of the 2020 McLaren GT, the car averaged 19.2 mpg. That’s better than the EPA’s official 18-mpg combined rating achieved by the feather-footed testers who never take a car beyond 60 mph during the city and highway fuel-consumption testing cycles. Yep, 19.2 mpg—and that’s U.S. gallons, not the supersized British ones where I live in the U.K.—in a 612-horsepower, 203-mph supercar.

Should I Hand Back My Car Guy Card?

Not so, er, fast. As the EPA itself points out, “Your mileage will vary.” And the 2020 McLaren GT’s fuel consumption so far reflects its duty cycle. I’ve been using it as I would use a regular car here, traveling to new vehicle launches and events in the U.K. and driving to visit family living outside London. That means regular 100- to 200-mile stints of highway cruising and the occasional quick run along a quiet country road, bookended by short commutes through stop-start London traffic. (And by short, I’m talking distance, not time; it can take up to an hour to do the last 4 miles home in heavy traffic.)

Speed cameras infest many of Britain’s 70-mph motorways, so the McLaren has spent a lot of time, traffic permitting, running on them with the cruise control set at precisely 74 mph, the 4.0-liter twin-turbo V-8 turning just past 2,000 rpm in seventh gear. At these speeds the wildly optimistic trip computer suggests the GT is returning better than 27 mpg. Although I’ve yet to confirm it, I suspect the real number is closer to the EPA’s 22-mpg highway rating.

I haven’t done any long haul runs yet; a road trip to Scotland is on the agenda. But the numbers so far suggest a cruising range of 300 to 340 miles. That’s better than you’ll get out of a Lamborghini Huracán or Porsche 911 Turbo S. Does it matter? Absolutely. As the name suggests, McLaren pitches this car as a grand tourer. The last thing you want when you’re munching miles is to stop for gas every hour.

The ride quality on the highway with the suspension set in Comfort mode is excellent for a car of this performance potential, and the hip-hugging seats are surprisingly comfortable. Although the 4.0-liter V-8 is not the most charismatic engine in the business, there’s no sign of the annoying light-throttle engine drone between 1,500 and 2,000 rpm I noticed in the early-build car I drove from Spa, Belgium, to Reims, France, last year. You do have to drive the GT every inch of the way, though, even while cruising, as the supremely accurate and volubly communicative steering demands constant attention. A one-finger-on-the-wheel Buick Roadmaster it ain’t.

Tire noise on coarse tarmac is the GT’s biggest weakness at cruising speeds, an inevitable byproduct of a firmly bushed suspension bolted to a carbon-fiber chassis. Although the noise is in truth not much worse than in one of the sportier-spec Porsche 911s, it does mean you have to crank up the very good Bowers & Wilkins audio system to hear your favorite tunes above 50 mph.

Around town the McLaren GT is smooth and unfussed in traffic, the seven-speed dual-clutch slipping neatly between ratios when left to its own devices. Although the ride is firm at low speeds, mainly because of the stiff sidewalls of the 225/35 20-inch front and 295/30 21-inch rear Pirelli P-Zeros, the suspension is still supple enough to deal with the worst of London’s cratered and cobbled streets. I’ve driven regular sedans and SUVs on big wheels with performance-oriented suspensions that feel harsher and more arthritic than this McLaren.

The 4.3-inch ride height increase compared to the closely related McLaren 720S and the 10-degree approach angle afforded by the redesigned front end both ease speed-hump and rain-gutter anxiety, while the quick steering is great for avoiding potholes that could pop a tire and crunch a lovely rim. And as with most McLarens, the generally good all-round visibility makes the GT easy to place in the cut-and-thrust of London traffic.

Niggles so far? On sunny days—not unknown even in England—the clear glass roof means the cabin heats up rapidly, and glare makes the central touchscreen unreadable. The standard solid roof, or the optional dark-tinted glass one, is a much more sensible choice. Adjusting the air conditioning is a constant reminder why putting important controls on automotive touchscreens is a bad idea: The time spent hunting and pecking at the small icons on the GT’s screen would be better spent looking at the road. And having to press the “Active” button on the center console before I can switch between powertrain and chassis modes seems an annoyingly needless step. This byzantine piece of McLaren behavioral logic, which dates back to the original MP4-12C, has thankfully been banished from the new Artura.

For the first few weeks I had the 2020 McLaren GT, the infotainment system would mysteriously reset itself when I left the car parked at home for a few days, the clock defaulting to 1 pm and the navigation system insisting every journey I programmed into it was starting from the McLaren dealership where I originally picked up the car. It then fixed itself just as mysteriously and has been fine ever since. I suspect the issue may have been something to do with the relatively weak satellite and cell signals in the basement garage of my apartment complex, because it wasn’t a problem on the radar of McLaren’s service folks when I rang to ask. Other than that, nothing has broken or failed to work.

Right from our very first time behind the wheel, we’ve known the 2020 McLaren GT, with its sure-footed speed and seductive mid-engine style, to be a genuine supercar. But as we’re learning, it’s a genuine supercar that doesn’t seem particularly fragile or highly strung. In other words, a genuine supercar you truly can live with every day.