The electric 208 is one of Europe’s best electric car offerings currently on the market.

Peugeot has gone through ups and downs over its more than a century of existence, and in recent years it’s been on the upswing. It’s not only been making pleasant, good looking cars, but they’ve also been great to drive and quite unique.

Its latest 208 city car stands testament to things actually going well at Peugeot, and you can even have it as the fully-electric e-208, which is currently one of Europe’s best all-round EVs. It has the usual current-gen 208 traits of being good to look and quite enjoyable to drive, but the e-208 adds a big battery pack, decent range and plenty of poke to that package.

Until the appearance of a hot 208 GTi, the e-208 is the quickest 208 you can buy, and you won’t be left wanting for power nipping in and out of traffic in town. And for me, since I’m familiar with the lackluster Peugeots of the early 2000s most of which were really hateful machines with few redeeming features, the fact that the e-208 is so good is a bit surprising. I am happy it is a good car, but I was honestly not expecting it to be as talented as it is nice to look at. 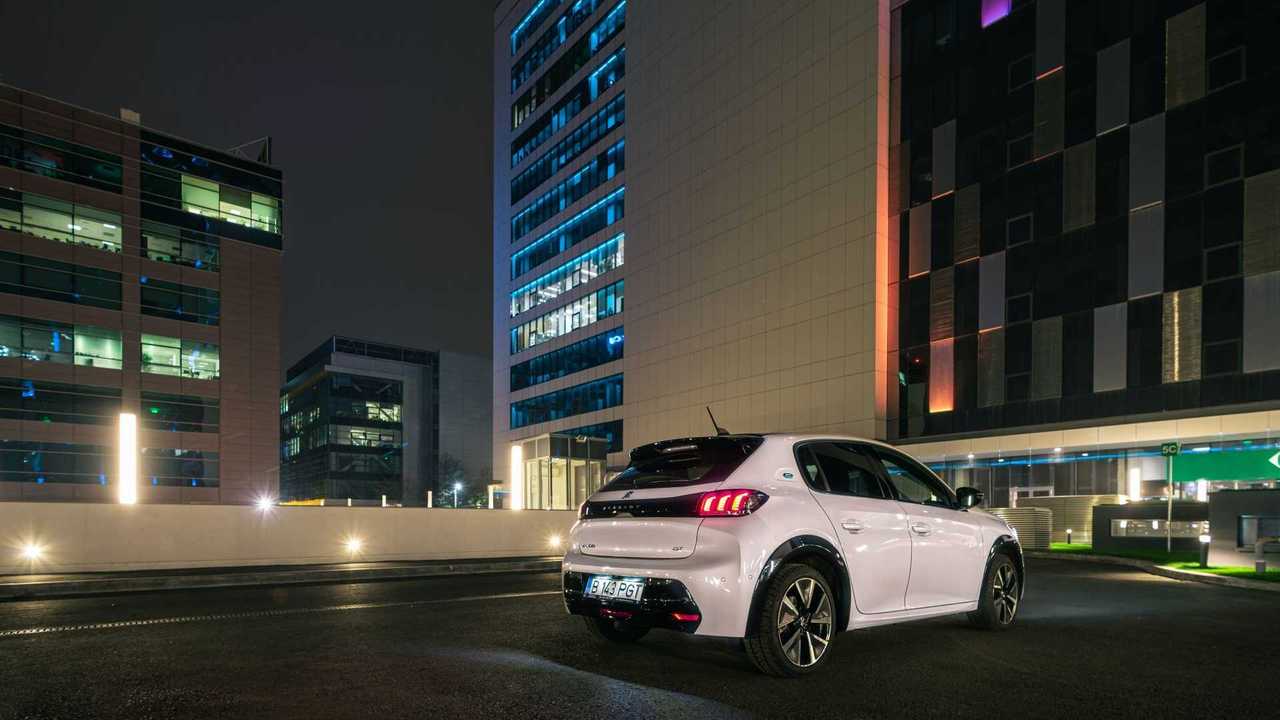 European subcompact cars, also known as superminis or B segment cars, are renowned for cramming in a lot of design and quality into a small package. The latest Peugeot 208, especially higher spec examples, really emphasize this characteristic of most recent small Euro runabouts, with its blend of striking details, nice proportions and undeniable French design flair all around.

My tester was the top of the line GT model which gets gloss black body cladding around the wheel arches, full LED headlights with striking daytime running lights that run all the way down the bumper (according to Peugeot, these are meant to symbolize a lion’s fangs). The three streaks of LEDs that you see in the front light clusters are also mirrored for the rear light clusters and this all ties the design in.

From the side, the e-208 is at its least striking, but it’s from this angle that you appreciate its lower slung stance than that of its predecessor, the more steeply raked rear screen and the overall more planted look of this model. If you want to tell the e-208 apart from regular ICE 208s, then you need to look for the ‘ e ‘ badges on the C-pillar, the e-208 badge on the back and the front and rear Peugeot badges that have some teal highlights.

Inside, the e-208 doesn’t disappoint – the interior is bold and sculptural and it matches the exterior style. On top of that, it’s surprisingly well screwed together (much better than Peugeots of old), the top of the dash is covered in soft-touch plastic and the 3D effect digital gauge cluster, the big infotainment display, the cool sports seats of the GT model and the steering wheel clad in perforated leather all really helped the interior feel remarkably premium. 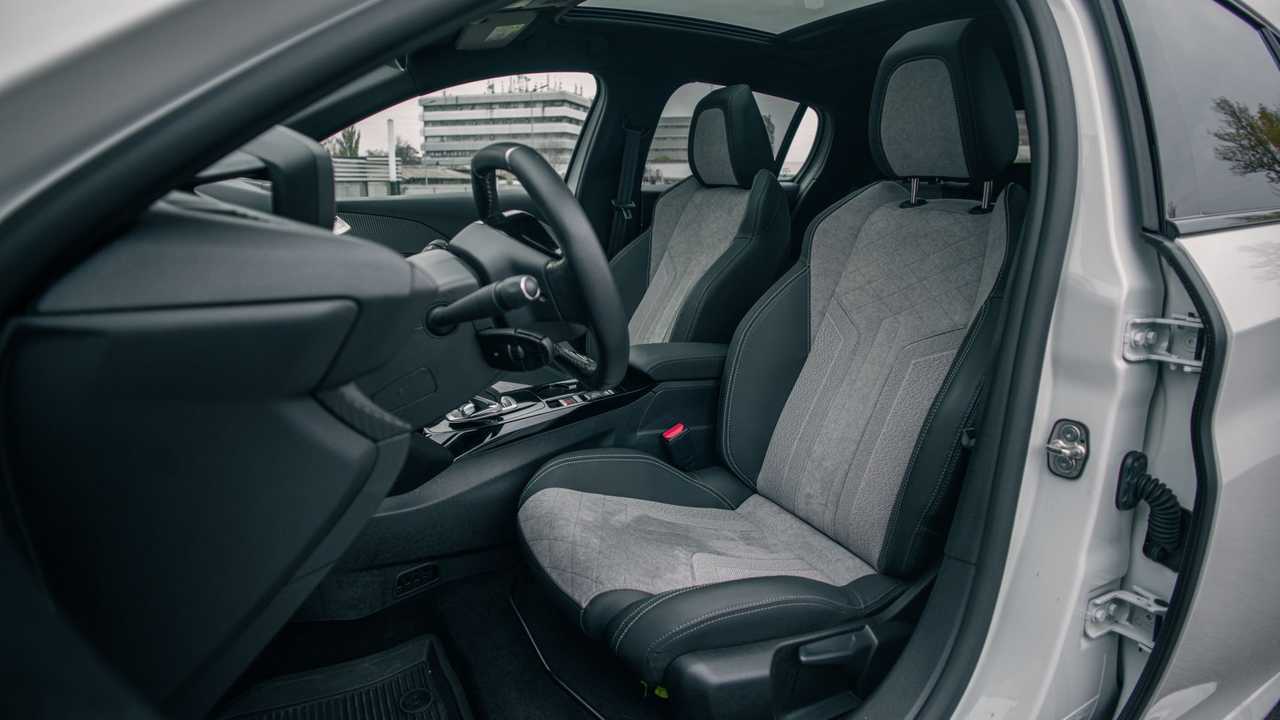 Even though the sports seats that come as standard on the GT trim look quite sporty, they offer a better blend of lateral support and comfort than you might expect. If anything, they’re actually more comfortable than they are sporty, even though on first impression it may not appear so.

The suspension is different to that of any other 208 because the e-208 is laden with batteries that make it a whopping 50 percent heavier than an equivalent model fitted with a 1.2-liter gasoline burning engine. With that being said, I did not find the setup overly firm, nor did I find the car particularly prone to rolling in the bends – it’s not the last word in body control, but it won’t make you seasick either.

And even with the relatively large (for the car’s size) 17-inch rims, the ride is remarkably smooth. It even does a great job over sharper bumps where most cars that have a similar torsion beam rear suspension setup being to fall apart – I was pleasantly surprised with the e-208’s well judged handling that was neither too soft nor too sporty.

It’s a great place to travel, even on longer journeys, although if you’re tall, you may find squeezing into the tight back seat a bit problematic. I’m 183 cm (almost 6-foot) tall and I barely fit behind the driver’s seat set in a position that felt comfortable to me. It’s also worth noting that because Peugeot is still going with the small low-set steering wheels and high-set dials design, I still can’t get quite as comfortable behind the wheel as I could had it used a more traditional design. It’s also worth noting that even if most of the battery pack is located between the rear seat and luggage compartment, the e-208 offers the same 265 liters as the normal 208. 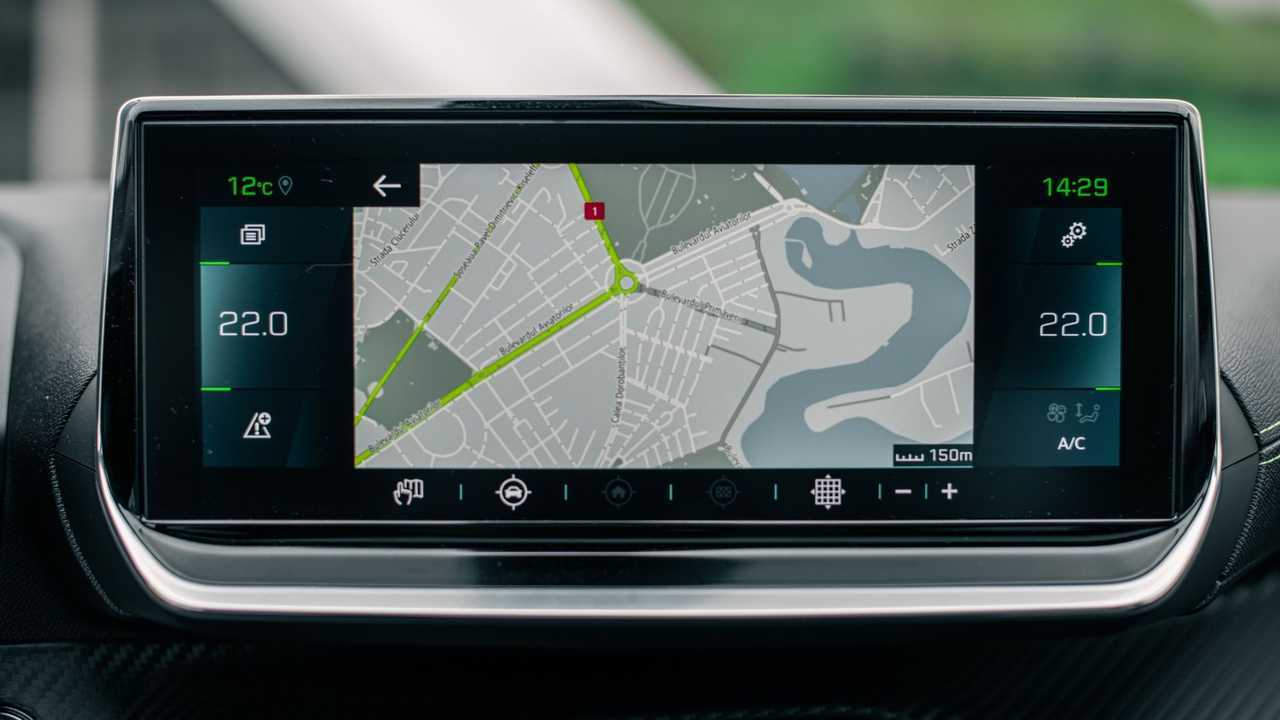 Since my tester was a high spec GT model with all the possible options fitted to it, you really didn’t feel like it was lacking for tech. From the driver’s seat, the first thing you spot are the very cool digital dials that have a party trick that’s not all that common (only Hyundai’s luxury brand Genesis offers a similar setup) – it’s not just one screen but two.

One is a traditional gauge cluster like you’ve seen before (thankfully one with sharp graphics and no strange motion blur that’s a byproduct of too low a refresh rate on some lower end screens), and the other is essentially a head-up display projected in front of it on a transparent screen, giving a cool 3D effect.

The 10-inch central touchscreen is an above average screen in terms of its graphics and response time. The menu structure of the infotainment is not easy to get used to, although there are physical shortcuts below it, yet you can have either Android Auto or Apple Car Play displayed on the screen if you don’t like Peugeot’s factory solution.

And since this is an electric car, you can also precondition it for driving or charging via an app on your phone. This uses the battery’s thermal management system to bring it to the optimum temperature for it to make the most of its impressive fast charging capacity. 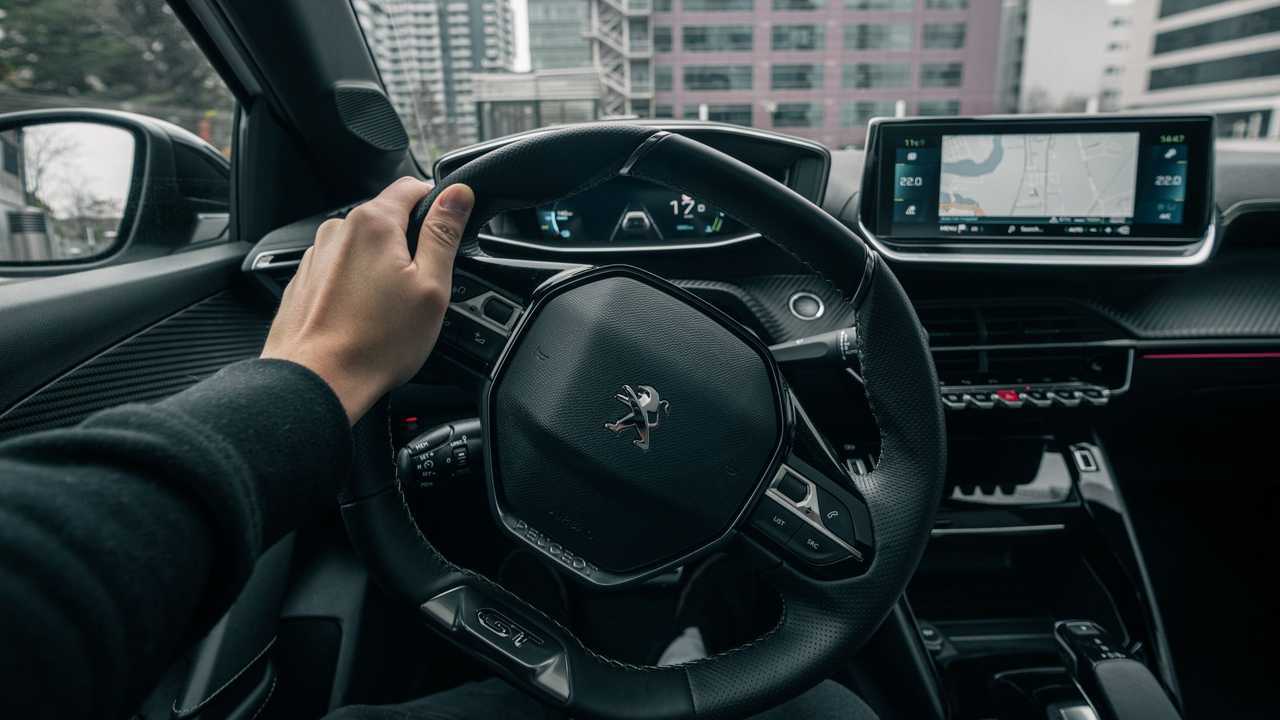 It also doesn’t run out of puff at higher speeds, pulling in a linear fashion all the way to its limited top speed of 150 km/h (93 mph).

Through the corners, the car feels spritely and surefooted, although there is a bit of body roll. This may be a byproduct of the fact that the heavy battery pack isn’t placed in the floor of the vehicle entirely. It’s actually split into several segments, one of which is located higher up in the car, in between the rear seat and the luggage compartment. 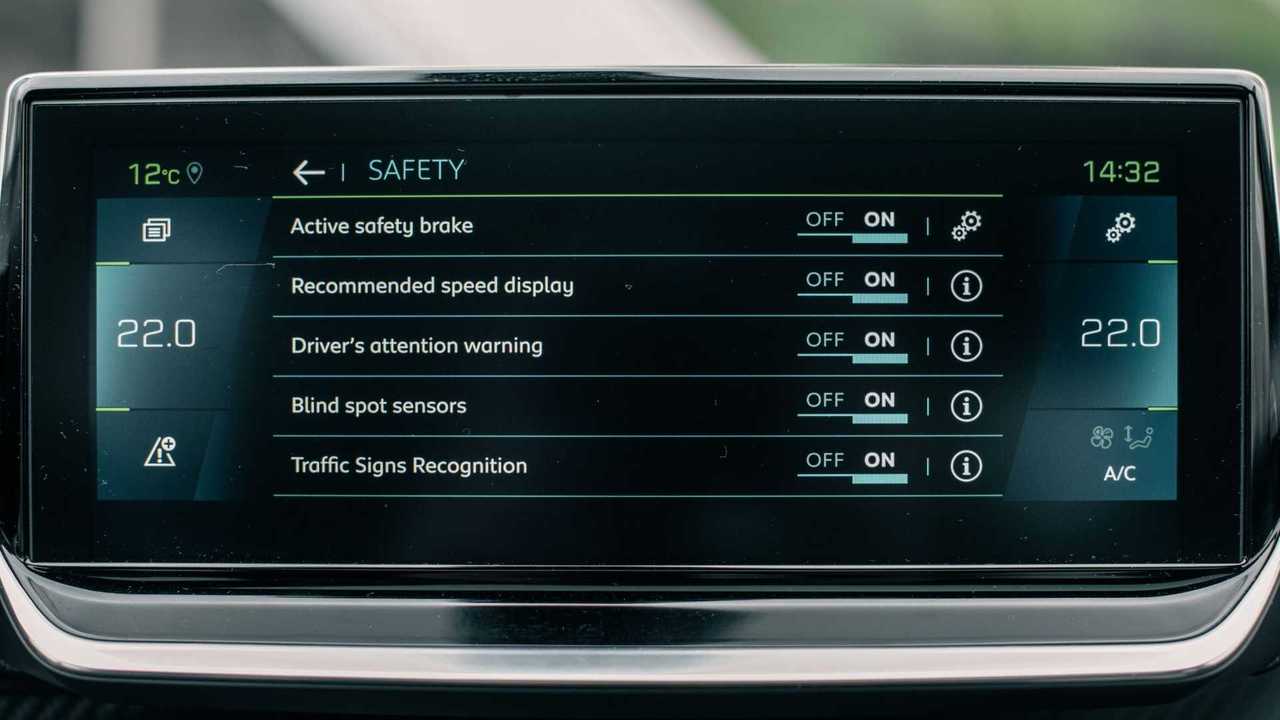 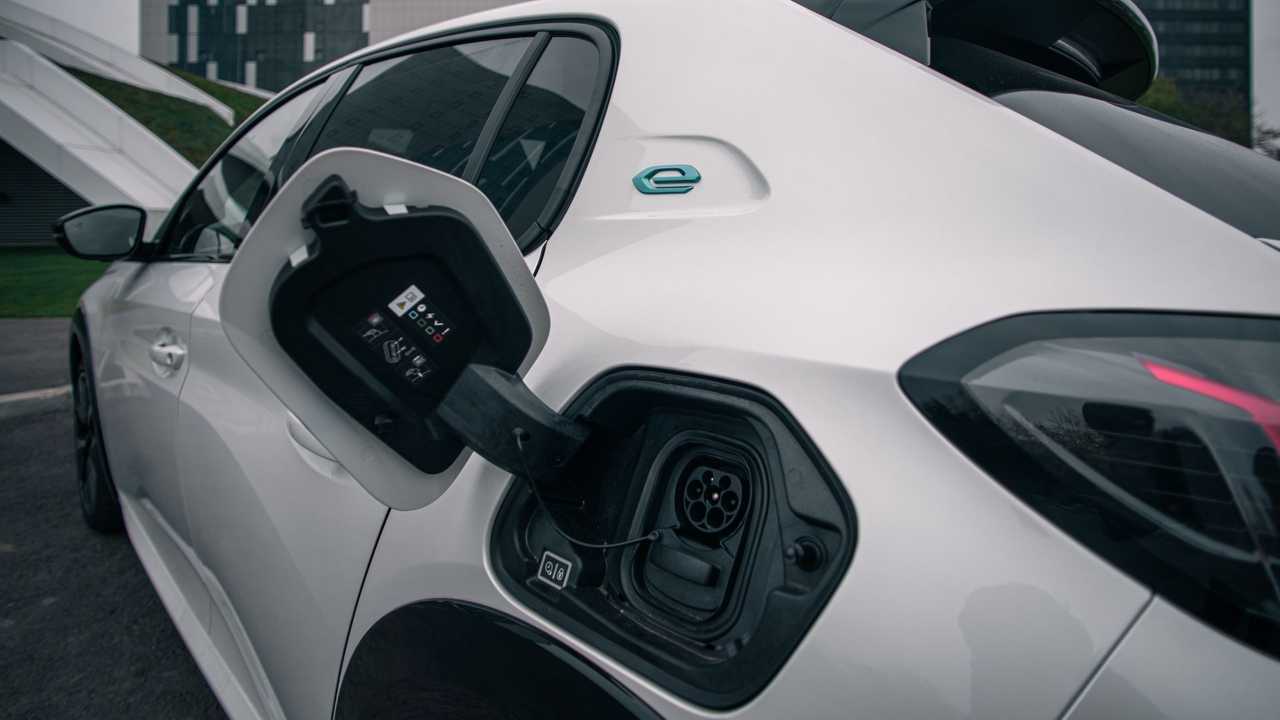 The e-208 has a comparably large (by class standards) 50 kWh battery pack with a usable capacity of 45 kWh. According to Peugeot’s claim based on the WLTP test cycle, the car should be able to do 340 km (211 miles) on a single charge, although in the real world you’re realistically looking at somewhere between 250 and 270 km (155 to 167 miles). It should use around 14 kWh/100km, which translates into 4.44 miles/kWh if you drive it sensibly.

It’s also above average in terms of its charging capacity – the e-208 can be charged at a maximum rate of 100 kW and at that rate, its battery will be 80 percent charged in 27 minutes, according to the manufacturer. Where I live, though, 100 kW chargers are still not common, but I did charge it using a 50 kW charger and it was putting juice back into the battery at a rate of around 300 km/h (186 mph) – it would probably take close to an hour to put the same 80 percent back into the pack. 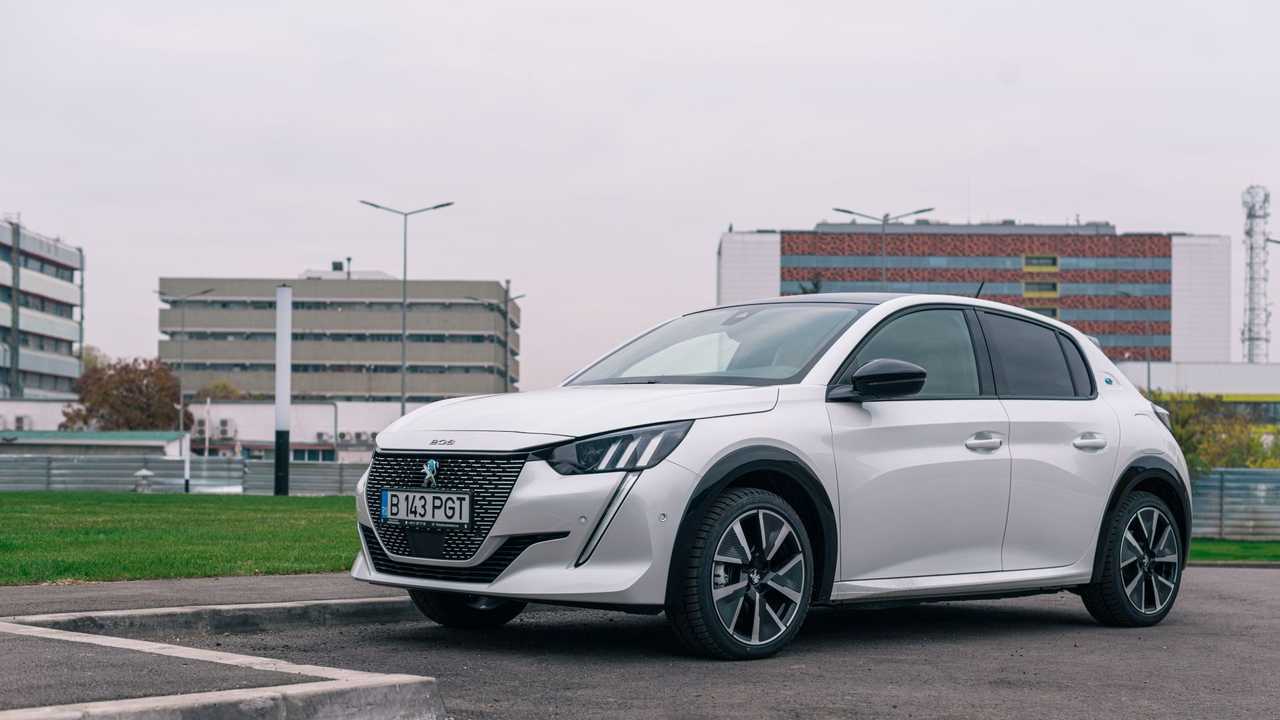 In Romania where I live, work and tested this vehicle, the government will give you a grant of almost €10,000 if you buy a brand new EV, so factoring that in, it does sound a bit more manageable. If you think about how much you’re paying for a Peugeot 208, it doesn’t really make sense, but when you realize just how good and complete an EV the e-208 is, it all starts to make sense.

If you’re a European car buyer looking for an electric city car to mostly drive around the city with occasional weekend escapades, then the e-208 is one of the best choices currently on the market. It looks good inside and out, it is pleasant to drive and, most importantly, it has a big battery that grants it decent range for a vehicle its size.

If you’re an American, then you should keep an eye out for news of Peugeot’s return to the States. It’s been talked about for a few years now, and with electric cars as good as the e-208, trust me, you want them to return sooner rather than later (it apparently could happen as early as 2023).

END_OF_DOCUMENT_TOKEN_TO_BE_REPLACED

END_OF_DOCUMENT_TOKEN_TO_BE_REPLACED
We and our partners use cookies on this site to improve our service, perform analytics, personalize advertising, measure advertising performance, and remember website preferences.Ok