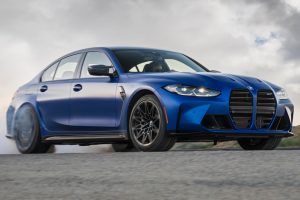 Any new BMW M3 is a big deal to the enthusiast car community. Forget for a moment what the car actually is and focus instead on understanding what it represents. The M3 is the souped-up, hot-rodded, better-to-drive version of the traditional Ultimate Driving Machine, the BMW 3 Series. The 3 Series is supposed to be a driver’s car right out of the box; the 3 Series after BMW’s M Division performance gurus have fiddled with it? We’re talking hopes and dreams here, people.

While it will never be cheap, this level of M performance should be somewhat attainable. M3s tend to look pretty good, too, going all the way back to the swole-fendered, deep-chinned, bewinged OG E30 version of the 1980s. I don’t think I’ll ruffle too many feathers by saying fans of fast cars want any new M3 to be handsome, fast, expensive without being exclusive, and—above all else—wonderful to drive. The all-new G80-generation 2021 BMW M3 isn’t that exact car. So, what is it?

It would be a dereliction of auto scribe duty for me to go one sentence further without mentioning this car’s face. It’s insane. I’ve been staring at it online for months, and in person for more than a week. The twin, massive grille structures have not grown on me. The nostrils do not look better in person, nor have I gotten used to them. The design is … “ugly” isn’t the word, as that’s too easy. But I do have a theory about why. For the most part, when people think the front end or face of a car is good looking, they’re anthropomorphizing it. That means they’re projecting human qualities onto what they’re looking at. Headlights as eyes and the grille as a mouth, etc.

The face of the new M3 (and its two-door sibling, the M4) doesn’t look human. It’s alien, unfamiliar, insectoid. As such, the front of the car is repulsive. Meaning the opposite of attractive. Have you seen a potato bug? Also known as a Jerusalem cricket, these slimy, prehistoric, hissing (they literally hiss!) abominations make my skin crawl. They repulse me. I have no way of knowing if BMW did so intentionally, but it’s created a car that repulses people in the same way. If you see a G80 M3 bearing down on you (and it will be bearing down on you), you’ll instinctively get out of its way. One of my favorite German words is Uberholtprestige, which means “overtaking prestige,” as in, when you glimpse a car in your mirror, it’s using its Uberholtprestige to make you pull left and let it pass. Viewed through this particular lens, the M3’s face works. That said, I don’t enjoy looking at it.

Is the rest of the car good to look at? No, not really. It’s safe to say that this generation of M3 is a dud, design-wise. The side is a bit homely, and BMW didn’t spend the money to flare the rear door skin to match the swollen rear fender. The result is an abrupt transition from door to fender that looks cheap. The rear end is generic. I suppose I should say “generic with four huge pipes and a carbon splitter,” but it’s generic all the same.

If you look closely at the interior photos, you will notice what looks to be a carbon-fiber tray that sits between the thighs of either front seat occupant. Well, that’s exactly what it is. That’s part of the $3,800 M Carbon bucket-seat option. I drove a different Frozen Portimao Blue M3 with these seats for about three minutes. Just around the block to get a taste. I did not like these seats. Unlike the no doubt thin, six-and-a-half-foot-tall German engineers who designed these chairs, I’m—like so many Americans—not so tall and possessed of beefier thighs. Point is, I initially did not like the seats. Then I had to drive all the way across Los Angeles on the 405 with its perpetual, horrible traffic. Ninety minutes later, I’d come to the conclusion that these carbon-backed thrones are the least comfortable I’ve ever sat in. And I’ve sat in a McLaren Senna.

Then I drove the M4 Competition the way it was designed to be driven, which is to say hard. Very hard, in fact. And now I believe these are the best performance seats ever fitted to a car. If they’re not the actual best, then they’re as good as any. These optional seats hold you perfectly in place during high-spirited license-jeopardizing hoonage. For normal everyday commuting, however, they’re bad. Choose wisely. The rest of the interior is very much like an M5’s or an M8’s, with the addition of the cruel M Drift Analyzer. I held a 24-yard-long drift at a 31.6-degree angle for 3.4 seconds and the damn thing only gave me one star out of four.

The entry price for an M3 Competition is $73,795. Our test car? $104,245. Yes, that’s more than $30,000 in options. Must-have extras? I think the carbon-ceramic brakes for $8,150 are totally worth it. Do you need the $950 carbon trim inside? At $4,700, the M Carbon Exterior package is probably a waste (even if the front intakes are choice), especially since the critical exterior carbon bit, the carbon-fiber roof, is standard. I could go either way on the $2,500 M Driver’s package, which raises the top speed from 155 mph to 186 and includes a one-day “high-performance driving class” at a BMW Performance Center. On second thought, splurge.

Yes, the G80 M3 is larger and heavier than the previous F80 M3. The wheelbase has grown by 1.8 inches, and the car is 4.6 inches longer and about half an inch wider. While the weight increased, it’s not as bad as you might think. Ninety-nine pounds separate a 2016 M3 Competition (3,646 pounds) from this M3 Comp, which our scales say sits at 3,745 pounds. That’s not light, but it’s not a figure one should rend their garments over, either. In fact, it’s still light. The M3 Competition’s most direct competitor, the 505-hp Alfa Romeo Giulia Quadrifoglio, weighs 3,785 pounds, and the last Mercedes-AMG C63 S we tested registered 3,936 pounds. While we’ve never weighed an Audi RS5 Sportback, its S5 Sportback relative clocked in at 4,092 pounds. It’s a safe bet that the RS5 version is heavier still. What about all the hand wringing you saw on the internet saying that the M3’s too big and heavy? Caveat lectorum.

The M3 Competition’s S58 turbocharged 3.0-liter I-6 engine is rated for 503 hp and 479 lb-ft of torque; the non-Comp model makes 473 horses and 406 lb-ft, for reference. The output runs through an eight-speed ZF automatic transmission and onto the rear wheels. (All-wheel drive is available for 2022. ) Can you still get a manual transmission? Yes, but not on the Comp.

Wow. I wasn’t prepared for how brutal, how relentless, how indomitable the G80 BMW M3 Competition feels on the road. The initial impression is all torque—buckets and suitcases full of it. The S58 engine produces peak torque over a glass-flat “curve” from 2,600 to 6,000 rpm, and the car’s forward thrust simply never relents. Third, fourth, or fifth gear, it doesn’t even matter because you’re still in the meat of the “curve.” Bimmer fanboys and girls wrinkled their collective noses over the fact that the last-gen car’s dual-clutch gearbox was dumped in favor of a plain-ol’ automatic. These same types are also upset that anything other than a manual exists. The reality? If I told you the transmission was actually a dual-clutch, you probably wouldn’t know the difference. That’s how quick ZF’s ‘box has gotten. Sure, downshifts could be a fraction of a second quicker, but that’s getting into the realm of nitpicking.

The front end is remarkable. Planted, accurate, neutral—it’s about as good as sporty cars get. The steering is remarkably direct and there’s not a lick of understeer, which is not easy to pull off on a street car this nose heavy (weight distribution is 53/47 percent front and rear). There’s barely any oversteer, either. My horribly judged drift attempts notwithstanding, I struggled to get a tire to squeal. This thing is absolutely stuck down. It truly feels as if the G80 M3 was built around its Michelin Pilot Sport 4S tires. Pilot Sport Cup 2 ultra-high-performance rubber is available in other markets, but in the United States, we’re just being offered the regular high-performance meats. I’m going to say something weird, but I don’t think we need the Cup 2s. Again, the M3 is as planted as any car I’ve driven.

Popular internet opinion says the new M3 is now really an M5. The reality is that’s in the M5’s dreams. Aside from the fact that the G80 M3 is more than 400 pounds lighter than the current F90 M5, the G80 M3 is also around 200 pounds lighter than the legendary E39 M5. Even the 311-hp E34 M5 weighs 100 pounds more than this car. No M5 has ever felt this fleet, this exact, this sporting. Sorry, internet, but that’s the truth. Sure, the original 282-hp E28 M5 was much lighter, but that one had nowhere near this sort of power-to-weight ratio. No, the G80 M3 is something else entirely.

While I have yet to slide behind the wheel of an E30, I’ve driven more than my fair share of every other generation of M3. Years ago, I drove an E46 M3 back-to-back on a track with a 997-generation Porsche 911 Carrera S. The E46 was nice and fun and all that, but the 911 seemed twice as quick and 50 times as good. You wouldn’t really think to ever compare the two. Fast forward, and not only did I have this pig-faced M3 at home, but also a Porsche 911 Carrera S manual. I took both Germans up the same road on the same day—the best way there is to compare cars. The BMW felt quicker, and according to our test numbers, it is. I’m almost positive that on a racetrack, the 519-pound-lighter Porsche would find a way to exert its supremacy—that’s what Porsches do. But in the canyons? Where both cars will be driven the majority of the time? I’d rather have the 2021 M3 Competition. This car is that good. I’d just need to remember to always park the thing with its ghastly nose in.