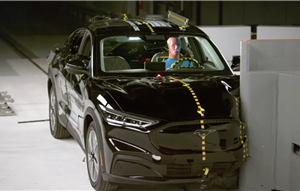 The 2021 Ford Mustang Mach-E is a new electric vehicle, an expansion of the Mustang nameplate into a brand, and a very important vehicle for the Blue Oval—the latter being an understatement. Don’t forget that we also feel that it earns its pony badge, offering style, performance, and reasonable utility with enough deference to its two-door sibling. Not to say the Mach-E isn’t controversial to some enthusiasts, but that would be the case no matter how good it is. Now we can add the Insurance Institute for Highway Safety’s (IIHS) crash-test ratings to the discussion.

Let’s cut right to the chase. The Mach-E scores well in all the crash tests IIHS conducts. (And as of this writing, NHTSA hasn’t conducted its testing.) It earned the top rating of “Good” in all the major crashworthiness areas: small overlap front crash, moderate overlap front, side, roof strength, and head restraints/seats. This means it qualifies for the “Top Safety Pick” overall ranking—nearly the highest ranking available.

What prevents it from getting that little “+” is the SUV’s headlights. The lamps on the California Route 1 and Select trim levels only received a “marginal” rating from IIHS (in particular being rated as “inadequate” in the gradual left curve test). The lamps on some other trims (Premium, GT, First Edition) received the highest rating. To get the Top Safety Pick+ rating, a headlight with an Acceptable or Good rating must be standard.

Ford could upgrade those trims with the higher-rated headlights for a future model year to snag that final “+” rating, but for now, consumers concerned with illumination should opt for the Mach-E’s higher trims. Either way, the Mach-E appears to be quite crashworthy.