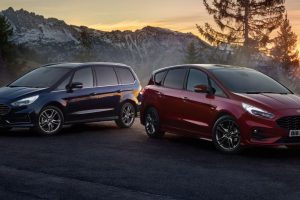 Ford has unveiled the S-Max Hybrid and Galaxy Hybrid in Europe, marking the first time both MPVs have been electrified. Both cars share the same 190 PS hybrid powertrain, featuring a 2.5 litre Atkinson cycle petrol engine that’s augmented with a small electric motor.

The Blue Oval says the hybrid engine offers 10% better fuel consumption, making it a “compelling alternative” to its EcoBlue diesel powertrains. The average fuel consumption for the S-Max Hybrid is 6.4 litres per 100 km, and it will do the 0-100 km/h sprint in 9.8 seconds.

A small 1.1 kWh lithium-ion battery pack (with an integrated liquid cooling system) is located under the boot floor. However, boot space remains unchanged at 285 litres with all three rows up. That’s because Ford installed a specially designed twin-exit exhaust system that is routed around the battery pack. The battery, while small, offers pure-electric driving for brief periods of time.

Equipment-wise, the S-Max features a 10-inch digital instrument cluster with hybrid-specific graphics, 18-way adjustable seats (approved by spinal health organisation Aktion Gesunder Rücken), Isofix child seat anchors for all three rows, and a hands-free tailgate. The S-Max can be had either as a five-seater or seven-seater model.

The Galaxy Hybrid, meanwhile, is nearly identical in performance. The same 2.5L hybrid powertrain helps the larger MPV do the century dash in 10 seconds flat, and has an average fuel consumption of 6.4 to 6.5 litres per 100 km.

Like the S-Max, it too gets a 1.1 kWh battery pack installed under the boot floor, but this is done without sacrificing its 300-litre boot space. With the second and third row folded, the Galaxy offers a whopping 2,339 litres of space.