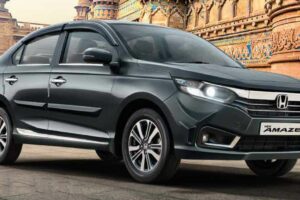 The second-generation Honda Amaze has received its first facelift in India, more than three years after making its initial debut in the country. As far as changes go, the compact sedan benefits from revised styling and new features, but under the bonnet, its mechanically unchanged.

Starting at the front, the Amaze gets a new grille design featuring a slimmer upper bar and two slats below it, all of which are finished in chrome. Further downwards, the fog lamp housings on the bumper have also been tweaked slightly and gain some chrome garnish.

Moving to the rear, the facelift introduces a new C-shaped lighting design for the LED taillights, while the lower apron gains reflectors and a bit of chrome. Inside, the Amaze looks almost identical to the pre-facelift model, with a few revisions like the silver trim on the dashboard and steering wheel, front map lamps, a new chrome finish for the air-conditioning vent knobs as well as a dust and pollen filter.

Some of these design elements are specific to certain variants of the Amaze, of which there are three of them: E, S and VX. The base E comes standard with halogen headlamps, bulb-type rear combination taillights, manual air-conditioning, a multi-info display (MID), 14-inch steel wheels, fabric seats, two airbags, rear parking sensors and ABS. Cruise control is also offered for the VX, but only for cars equipped with a manual transmission. Additionally, the VX is the only that comes with paddle shifters, but only with the petrol engine and CVT pairing.

On that mention, there are two engine options for the Amaze, both pairable with either a five-speed manual or CVT. The petrol unit is a 1.2 litre SOHC i-VTEC four-cylinder that makes 90 PS at 6,000 rpm and 110 Nm of torque at 4,8000 rpm, which is the same one used in the pre-facelift model. Customers in India will have five colours to choose from, including Meteoroid Grey Metallic, Radiant Red, Platinum White Pearl, Lunar Silver Metallic and Golden Brown Metallic. Pricing for the Amaze with a petrol engine start at 632,000 Indian rupees (RM36,069) for the base E variant with a manual transmission, with the top VX CVT retailing at 905,000 INR (RM51,646).

There are five variants with the petrol engine, but it’s just four with the diesel engine, with prices starting at 866,500 INR (RM49,438) and peaking at 1.115 million INR (RM63,616). Honda India also offers a wide range of accessories for the Amaze, including selected packages and even different seats.

The Amaze occupies the sub four-metre entry-level sedan segment in India, with competition in the space coming from cars like the Maruti Suzuki Dzire, Hyundai Aura, Ford Aspire and Tata Tigor.