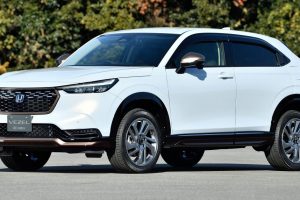 The third-generation Honda HR-V has finally been revealed and is set to go on sale in Japan (where it’s known as the Vezel) this coming April. Ahead of the model’s official launch, the Japanese carmaker has also released details about the genuine accessories that will be offered to customers via Honda Access.

These accessories are bundled into two packages, both aimed at enhancing the aesthetics of the crossover, should the stock look be a little too bland for your liking. The first package is called Urban Style, which is applied to the red car you see before you, and includes a skirt for the front bumper that is accentuated by a wide-width chrome trim piece.

There’s also a new front grille, which not only comes with a chrome surround, but also an insert that is different from what you find on the regular HR-V. Instead of a multi-slat design, the Urban Style comes with a hexagonal-patterned mesh, with the upper portion sporting chrome accents.

Along the sides, the package adds on some side lower garnish, while the rear receives a slightly more prominent tailgate spoiler. Further downwards, there’s a rear bumper skirt, which is accompanied by chrome garnish and exhaust finisher.

If the chrome-heavy Urban Style package is a little too much for you, there’s also the Casual Style option. The add-ons at the front are similar to what was mentioned earlier, but the grille surround and lower skirt are finished in copper brown instead of chrome. Further instances of the colour can be seen on the rocker panel garnish and door mirror caps, as well as the rear bumper skirt.

For now, there’s no word on official pricing for either of the two package, so we’ll have to wait a few more months when sales of the new HR-V starts in Japan. Stock, Urban Style, or Casual Style, which look do you like most for the HR-V?