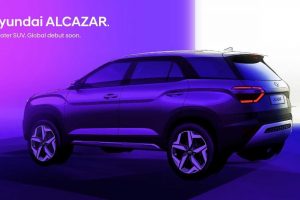 Because there’s no such thing as too many SUVs, prepare to add another one to the list.

With few exceptions, expanding the SUV lineup is a surefire way to boost sales as people gradually continue to abandon traditional body styles such as hatchbacks and sedans. Hyundai knows that very well, hence why its lineup of high-riding models has exploded in recent years. As it turns out, the South Korean brand has at least one more SUV bun in the oven – the Alcazar.

What is it? Essentially, it’s a three-row version of the Creta (pictured at the bottom). Now in its second generation, the small crossover sold in emerging markets is about to spawn a more spacious counterpart with a choice between six or seven seats. These semi-revealing teaser images show the styling won’t stray away too far from the donor car, at least when it comes to the front half.

To accommodate the third row, Hyundai has stretched the rear end where you can notice a generously sized quarter glass to improve visibility and allow more light into the roomy cabin. The larger taillights now have a C-shaped light pattern and the third brake light has been incorporated into the roof-mounted spoiler rather than staying on the tailgate as seen on the Creta.

An interior design sketch shows individual seats on the second row, separated by a central armrest and what seems to be a pair of cupholders. The rearmost seats look rather cramped, but that’s to be expected considering the regular Creta is only 169.3 inches (4,300 millimeters) long and has a wheelbase of 102.8 in (2,610 mm). It would appear accessing the third row can be done only by folding the middle seats.

Going up against the Tata Safari and MG Hector Plus, the new Hyundai Alcazar is expected to inherit the oily bits from the Creta donor car. What that means is customers will have a 1.5-liter naturally aspirated unit serving as the entry-level engine, rated at 113 horsepower (85 kilowatts) and 106 pound-feet (144 Newton-meters) of torque.

The 2021 Alcazar will be unveiled on April 6 before going on sale in India later this year. It will join Hyundai’s ever-expanding SUV lineup, which recently grew to include the fully electric midsize Ioniq 5 and the subcompact Bayon.