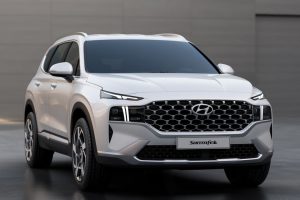 The 2021 Hyundai Santa Fe facelift has been launched in Indonesia. The heavily-facelifted fourth-generation TM was first unveiled in June 2020, and its Indonesian debut follows the introduction of interesting models like the Ioniq Electric, Kona Electric and Palisade SUV in the republic.

The original TM Santa Fe’s front end is already a bold one with three tiers of lighting. This facelift deletes the small foglamps at the lower bumper, which now has a clamped shaped air intake. The grille is now visually merged with the headlamps for a full width effect.

Diving in, the grille has a signature geometric patterned inlay that appears like cascading scales. There’s also another version of the grille in a chain link style that’s rather similar to today’s version. The new Santa Fe will be very distinctive at night thanks to T-shaped LED daytime running lights that bisects the main light beams.

There’s also a seamless line that connects the DRLs to the tail lights. The increased width on the wheel arches accentuate the SUV’s rugged look, and the largest wheels are now 20-inch items, although the Indonesian-market gets 18-inch rims. At the rear, the redesigned LED tail lights are now connected by a slim illuminated bar, which replaces a chrome bar. The bumper design is also new, and there’s now a full width red reflector strip.

Inside, the twin-cowl dashboard is familiar, but the high centre console is new and now sits on a sloping angle. Hyundai says that the new cabin provides more space, comfort, and convenience. There are also more premium soft-touch materials, Hyundai says.

On the fresh centre console, the controls are all new and the traditional shifter has been replaced by buttons. The shift-by-wire system allowed the designers to have buttons instead of a knob. For the first time, the Santa Fe comes with a Terrain Mode selector – a control knob for Eco, Sport, Comfort and Smart drive modes, as well as the HTRAC all-wheel-drive system’s sand, snow and mud presets. AWD is not available in Indonesia though; all variants are FWD. Two of three trim levels in ID (Prime and Signature) get the new 12.3-inch digital meter panel, while the base Style makes do with analogue dials and a 4.2-inch multi-info display. The top spec Signature adds on a wireless phone charger in the centre console.

As mentioned earlier, this is as heavy as facelifts come, and the 2021 Santa Fe is built on an “Integrated Architecture” with Smartstream hybrid and plug-in hybrid options available for the first time. The new Santa Fe will be the first Hyundai SUV globally based on Hyundai-Kia’s all-new third-generation vehicle platform, which allows for significant improvements in performance, handling and safety.

In Indonesia, the Santa Fe is offered with a 2.5 litre naturally aspirated petrol engine (180 PS/232 Nm) and a 2.2 litre R turbodiesel with 202 PS and 441 Nm of torque from 1,750 to 2,750 rpm. The petrol engine is mated to a six-speed torque converter automatic while the CRDi gets an eight-speed dual-clutch transmission.

Will the latest Santa Fe be coming to Malaysia? As this SUV is a core model for Hyundai-Sime Darby Motors, it should be in the pipeline. There has been a report pointing to increased CKD production volume despite Hyundai setting up shop in Indonesia and moving its regional HQ from here to Indonesia. HSDM is planning “locally-assembled SUV models in 2022” and the Santa Fe could be one of those. What do you think of the Santa Fe’s new look?