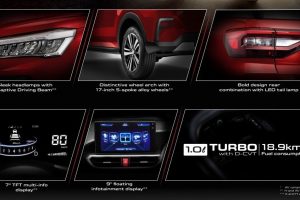 Like a cue to let loose, Perodua’s sales personnel are out in full force to win those bookings for the D55L SUV, which order books were opened today. They are armed with this leaflet, which appears to be a genuine flyer.

If so, the car’s name is out, and the SUV we’ve known all this while by its D55L codename is the Perodua Ativa. What do you think of the name? Like it or not, this also means that the Kembara name will not be revived. “Activate Every Destination” is the tagline, although I can’t wrap my head around that one.

Name aside, the flyer has a couple of images that would be our first official look at the D55L. Sorry, I meant Ativa. There’s a repeat of the features mentioned earlier, confirmation of the some open secret details (like the 1.0L engine capacity, which this morning’s press release intentionally omitted), and some fresh bits. To recap, the range has three variants – X, H and AV – with prices estimated between RM62,500 and RM73,400, on-the-road without insurance, with sales tax exemption. Like Audi’s Matrix LED, ADB is a smart auto high beam that “cuts out” oncoming vehicles from the glare when high beam is on, instead of dipping the high beam completely. This means that you’ll get full shine even when there’s oncoming traffic, and no one gets blinded by it. ADB is for the H and AV only. The base X gets the regular auto high beam, already a P2 first.

The next feature is the Ativa’s 17-inch alloys. They’re two-tone items with a the bright part forming a double five-spoke look. This is marked as standard from the H onwards, which also means that the base X is likely to have 16-inch wheels. There’s also “bold design” rear LED combination tail lamps, which look a bit like the Myvi’s, but are slimmer and nicer. A trim strip bridges the tail lamps, with the Perodua emblem in the middle.

Next, we have the 7.0-inch TFT multi-info display. We wonder why P2 didn’t use digital instrument/meter panel instead because it’s exactly that, and not just an MID (fancy trip computer) as most people know it. It’s the first P2 to sport non-analogue dials, and the rev display is an interesting one. One again, this is H and AV only.

To the left of the driver is a large screen you won’t miss, a 9.0-inch floating touchscreen infotainment display. Earlier, it was mentioned that the system has voice recognition. Once again, this is available from the H onwards.

We know that the Ativa is based on the Daihatsu Rocky, but we’ve yet to see Perodua’s revised styling to the front and rear ends, if any. These zoomed in pics of the features show that there are some unique-to-P2 design elements, which means that the Ativa isn’t 100% Rocky in appearance. The headlamp shot shows that the grille connects to the “eyes”, which are also slightly different from what we’ve seen on the Rocky/Raize (extra tail on the eyebrows). In the wheel pic, we can see that the rear reflector trim (fake vent) is different from the Rocky’s, so we can say that the Ativa sports unique front and rear bumpers. Also not on the Daihatsu are the silver “skid plate” (rear diffuser) and chrome strip on the trim connecting the rear lights.

From what we can see of the interior, the digital instrument cluster design is similar to the Rocky’s, and so is the dashboard design, as seen in the floating screen pic. No unique-to-Malaysia dash like the Aruz perhaps, but we doubt anyone would be complaining.

The last of the six highlights is the 18.9 km/l fuel consumption, which is very good. It comes from a 1.0 litre turbo engine paired with a CVT; the Ativa is the first Perodua to feature a stepless automatic. In Japan, the Daihatsu Rocky and Toyota Raize twins are powered by a 1KR-VET 996 cc turbocharged three-cylinder engine with 98 PS at 6,000 rpm and 140 Nm of torque from 2,400 to 4,000 rpm. If the engine code sounds familiar, it is essentially the turbocharged version of the 1KR-VE used in the Axia and Bezza. The DOHC VVT unit has auto start-stop, which P2 calls Eco Idle.

Below all that is a mini spec sheet that focuses on the Ativa’s safety kit, which is unprecedented at this price point. It looks like Advanced Safety Assist (ASA) will remain as ASA, and the new package is not called “ASA 3.0”. The ASA suite – which includes Pre-collision Warning (PCW), Pre-collision Braking (PCB or AEB), Front Departure Alert (FDA) and Pedal Misoperation Control (PMC) – is standard across the board.

In all other Perodua models, only the top variants get ASA, so this is big news. The system has been improved too – P2 says that the AEB operates at higher speeds than the current 2.0 version (first introduced in the Aruz in 2019) and is now capable of detecting two-wheeled vehicles (pedestrians were added in 2.0).

Instead of lumping in the new features and calling it ASA 3.0, there’s a new safety banner called Perodua Smart Drive Assist, and under this is ASA, Driving Assist, Parking Assist and Headlamp Assist. In the Driving Assist department, Lane Departure Warning and Prevention (LDW and LDP) is standard across the board. To go full Level 2 autonomous, one has to go for the top AV, which adds on Lane Keep Control (LKC), Blind Spot Monitor (BSM), Rear Cross Traffic Alert (RCTA) and Adaptive Cruise Control (ACC). A Perodua that “drives itself” (remember, hands on the wheel, driver must be alert at all times) – they’ve come a long way indeed.

In the Parking Assist department, the X has reverse sensors, the H adds on front sensors and a reverse camera, while the AV includes RCTA to warn you of oncoming vehicles when reversing out of a parking space. In the Headlamp Assist area, the base model gets auto high beam, while the H and AV get the above-mentioned ADB.

With such a long list of active safety and driver assist features, surely passive safety features are a given for the Ativa? Correct. Six airbags (front, side, curtain), ABS, EBD, BA, VSC, Emergency Stop Signal, Hill Hold Assist and Isofix child seat anchors are all standard across the board. This is better than the Proton X50, which starts at four airbags and reserves all ADAS features for the RM103k Flagship variant. We’re expecting the full five stars from ASEAN NCAP. As for colours, the X and H variants can be had in Glittering Silver, Granite Grey and Cobalt Blue, with the mid-spec H also available in Pearl Diamond White and Pearl Delima Red.

AV buyers have the choice of Glittering Silver, Granite Grey, Pearl Diamond White and Pearl Delima Red, plus two-tone (black roof and A pillars) options for the two pearl colours (red and white). The two pearl hues and Cobalt Blue are new-to-Perodua colours. There’s a small premium for the pearl colours, and another top-up required for the black roof. A five-year/150,000 km warranty is part of the package.

Everyone seems to want to know how the Ativa shapes up next to the Proton X50. As mentioned earlier, it’s not really an apple-to-apple contest. The Perodua is a smaller SUV (335 mm shorter, 105 mm narrower, 75 mm shorter wheelbase), it has a smaller engine (1.0L vs 1.5L, both are turbo triples) and is more affordable than the X50, which is priced from RM79,200 to RM103,300. At around RM6k more, the base X50 Standard has engine capacity and body size on its side, but is otherwise trounced by the D55L AV in safety and equipment. We’ve done a separate spec comparo piece here.

So, there you have it, the initial specs (all the important bits are out, actually) and the name of Perodua’s much-anticipated SUV, the Ativa. What do you think of the package?