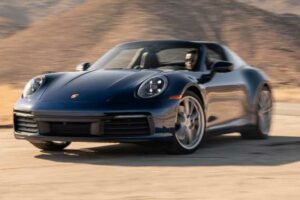 There are some things that should be against the law when it comes to cars. You know, like driving a 2021 Porsche 911 Targa 4S with the top up. OK, maybe we’ll allow it when driving in a thunderstorm or at temperatures below zero, but that’s about it. The reason is obvious: The Targa 4S is flat-out gorgeous when its soft top is safely stowed (after 19 seconds of mechanical gyrations).

The Targa 4S is also flat-out fast when you want it to be. Simply hold down the brake, rev its twin-turbo flat-six to 5,000 rpm or so, then let off the brake and drop the hammer. Our test team was able to launch Porsche’s latest 992-series 911 Targa variant to a sizzling 3.0-second-flat 0-60-mph sprint and on to an 11.3-second quarter mile at 122.5 mph. (In case you were wondering, Porsche claims a 3.4-second 0-60-mph time for a PDK-equipped model like the car we flogged.) A couple of years ago, those were supercar numbers. Now it’s just everyday performance from a 4S version of a modern-era 911. The Targa 4S isn’t nearly as insane as the new 911 Turbo(the second-quickest 0-60-mph production car we’ve ever tested), but then again, not much is.

And that’s all right, because even though it’s eminently capable, as we confirmed through our testing, the 2021 Targa 4S isn’t about being a crazy, numbers-wowing track monster. This 911 is born to tour, turn heads, and get your head some sun in the process. The Targa is a 911 tailor-made for a city like Los Angeles, where we roamed during the real-world part of our test. Whether you’re stop-and-going on L.A. ‘s freeways, puttering along in a posh beach town, or carving a canyon road, the Targa 4S has you covered.

It also gets plenty of looks, particularly this example in gorgeous Gentian Blue Metallic. But what really gets the heads nodding and tongues wagging is the Targa’s raison d’être, its trademark Targa hoop and curved rear glass that harken all the way back to the original 1965 model. Of course, back then taking off the top was a manual operation, not the power-actuated ballet of the last two generations of Targa. (Not so fun fact: You must be stationary to stow the top.)

How Powerful Is the Targa 4S?

With 443-hp (up 23 hp over the previous model) and 390 lb-ft of torque (up 22) generated by its 3.0-liter twin-turbo boxer-six, the 3,729-pound Targa 4S has gobs of power for any situation, as we found out at the test track and during our L.A. freeway fun-runs. The sounds of the wind whipping around in the cabin and the boxer bellowing behind you (there’s extra exhaust note at the push of a button if you order the $4,630 Sport package) only add to the drama. Particularly when the eight-speed PDK kicks down ferociously as you floor it past a poky pack of traffic.

When we had to get hard on the binders after one of those slowpokes suddenly pulled in front of us, we found out quickly that the 2021 Targa 4S can brake with the best of them, too. The car needed just 97 feet to come to a full stop from 60 mph during our testing. “Why can’t all cars stop like this?” associate road test editor Erick Ayapana wondered, marveling at the ability of the Targa’s brakes to consistently do their job even after multiple harsh stops.

This particular Targa 4S didn’t come with Porsche’s optional PCCB carbon-ceramic brake package, and unless you’re taking your Targa to the track, you’ll probably want to deploy your cash elsewhere on the options sheet. The base 4S brakes—headlined by six-piston front/four-piston rear aluminum calipers and 13.8-inch steel rotors all around—are plenty capable, hustling the car down quickly but with a progression that isn’t jarring or abrupt. In other words, the Targa 4S stops the way all cars should stop. That said, a 992-series 911 Carrera 4S hardtop we tested last year with the PCCB package stopped in an even more impressive 92 feet (although that 4S coupe was some 200 pounds lighter). Hmm, maybe you should get the bigger carbons after all …

How Well Does the Porsche 911 Targa 4S Handle?

As for the overall ride and handling of the 2021 Porsche 911 Targa 4S, it’s nearly as good as its 992-series Carrera 4S cousin, something road test editor Chris Walton made clear from trackside after his figure-eight runs in the Targa. “What can I say that hasn’t already been said about a Porsche on the figure eight?” Walton asked. “It is such a pleasure to drive a car that I know has been engineered to do these things.” How well did it do its thing? Very: 23.4 seconds at an average 0.87 g, but not quite as well as that hardtop 2020 4S we tested last year, which recorded a 23.1-second run at an average 0.88 g. Interestingly, this particular car’s optional rear-axle steering system ($2,090) may have been something of a hindrance at first; Walton found the turn-in a little too quick, leading to him clip a cone or two before he got used to the setup.

Walton had more love for the Targa 4S on the skidpad, where it recorded a 1.03 g average: “The way I can feel the progression of the brakes and trail them deep into the skidpad without ABS is rare for most sports cars. I love that I can dance it between understeer and oversteer on the skidpad and whack the throttle at the exit. Such a joy.”

Out on the open road, the Targa 4S is also a joy to drive fast or slow. It benefits from 992-generation updates including a redesigned version of Porsche’s Active Suspension Management (PASM) dampers; a wider front track; staggered-size wheels featuring 245/35ZR tires on 20-inch wheels at the front and 305/30ZR tires on 21-inch rears; and a variable, electronically controlled locking rear differential. It doesn’t punish you over harsh pavement, especially in Comfort mode, and its steering feel and turn-in are simply divine in any day-to-day situation. In his testing, however, Walton gives a slight edge to the steering feel of the rear-drive 911s.

How Much Does the Targa 4S Cost?

Adding to the overall experience is a cabin treatment that perfectly complements this particular Targa 4S, which Porsche calls Club Leather in Truffle Brown with Chalk stitching. It’s absolutely worth every penny of the $5,340 extra cost. Also worth it is the $5,350 Premium package (Bose surround-sound audio system, several lighting and convenience features) and the front-axle-lift system ($2,770), which can “remember” your steep driveway using GPS and lift the front axle automatically. Super trick. The 2021 911 Targa 4S starts at $136,550, and our test car checked in at $161,040 all in.

So, do you really want the 2021 Targa 4S over, say, a 4S coupe or convertible? Depending on how you spec them, price isn’t really much of a factor (although the coupe is some $10,000 less to start), nor is performance. It’s really down to preference. And whether you can afford all those metaphorical tickets you’d get if you dare drive the Targa with the top up.