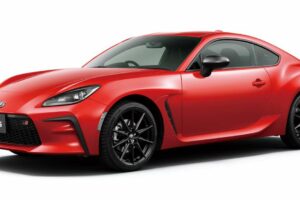 In terms of design, the GR86 is largely identical to the Subaru BRZ, save for the front bumper and wheel designs. It sits on the Subaru Global Platform, which brings 50% more torsional rigidity to the table, thanks to a reinforced chassis mounting system. It weighs between 1,260 kg to 1,290 kg depending on the trim, and the size is similar to its predecessor.

The biggest news this time is the fitment of the larger FA24 2.4 litre naturally-aspirated flat-four petrol engine that makes 235 PS at 7,000 rpm and 250 Nm of torque at 3,700 rpm. It’s rear-wheel drive only, with transmission options being a six-speed manual or six-speed Super ECT automatic. The 0-100 km/h sprint is now done in 6.3 seconds, which is 1.1 seconds quicker from before.

Other technologies offered with the engine include Toyota’s D-4S direct and port injection system, along with double overhead chain-driver camshafts, four valves per cylinder, and dual Active Valve Control System (DAVCS) to control valve timing on the intake and exhaust.

Besides that, automatic models are the only ones available with Subaru’s EyeSight driver assist technology, featuring various collision mitigation functions and pre-collision braking.

Customers also get to choose from an array of GR Parts, which includes aesthetic and performance upgrades such as GR suspension kit, big brake kit with monobloc callipers, 19-inch Y-spoke forged aluminium wheels, and carbon-fibre add-ons.