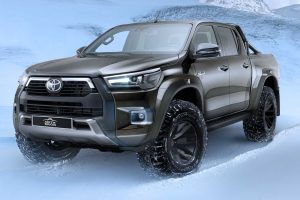 It’s the closest thing to Toyota having a Ford Ranger Raptor rival in Europe.

The Toyota Hilux is already one of the most capable trucks in its segment, but the folks at Arctic Trucks keep finding ways to make it even more competent off the beaten path. They’ve been selling upgraded Hilux pickups for years, and you might remember the one that starred in the golden era of Top Gear when it became the first passenger vehicle to cross Antarctica.

Arctic Trucks has now worked on the latest version of the Hilux, which debuted back in early June last year. The Toyota-backed AT35 model starts off as a 2.8-liter double cab model in the suitably called Invincible X trim level and then it goes through several changes to beef up the truck’s off-road credentials. For example, the ground clearance increases by 65 millimeters (2.6 inches) while approach and departure angles jump by nine and three degrees, respectively.

These modifications were possible after tweaking the Hilux’s frame and inner arches, while the bodywork also had to go through some changes. Arctic Trucks then fitted its own set of 17-inch wheels with chunky 35-inch BFGoodrich KO2 All-Terrain tires to further enhance the reputable pickup’s go-anywhere capabilities.

There’s more than meets the eye as the AT35 variant also has an upgraded Bilstein suspension with custom springs and dampers at the front, along with a revised anti-roll bar and modified rear dampers with extended shackles. Arctic Trucks’ Hilux has an additional 40 mm (1.6 in) front and 20 mm (0.8 in) of suspension lift compared to the standard Toyota variant. In addition, the front and rear differentials have been modified for better torque delivery.

The Hilux AT35 can be further distinguished from the original Toyota model courtesy of a rear height bar with a built-in receiver hitch. Arctic Trucks also throws in some anniversary decals to celebrate 30 years since the company was founded, and there’s also a flare package for the front and rear wings. Rounding off the upgrades are the extended side steps and even a certificate of authenticity.

Power comes from the standard-fit four-cylinder 2.8-liter turbodiesel engine with 201 horsepower and an ample 500 Newton-meters (369 pound-feet) of torque from 1,600 rpm. There have been rumors of a hot version developed by Gazoo Racing to take on the Ford Ranger Raptor, but we’ll believe it when we’ll see it. In the meantime, Toyota’s New Zealand division has developed its own rugged Hilux, dubbed Mako.