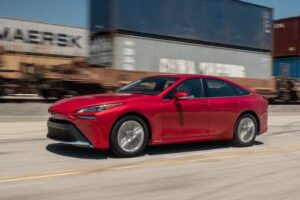 Hydrogen as a motor fuel: alive or dead? While some are already shoveling dirt in the grave, others say hydrogen is finally on the cusp of long-promised growth. It’s been nearly five years since we spent six months with a hydrogen-powered 2016 Toyota Mirai in our long-term fleet, and much has changed in the alternative-fuel world, including a spectacular new 2021 Toyota Mirai. Having been mega-impressed by the new car, we thought it was a good time to sign up for another long-term Mirai reassess  hydrogen’s place in our rapidly electrifying automotive world.

The new Mirai is a much nicer car than the outgoing model, with more range, more luxury, a lower price, and way more attractive styling. The 2021 Toyota Mirai is available in XLE and Limited trim levels, and we opted for the lesser. Why? Both cars share the same hydrogen-fuel-cell-powered electric powertrain, but the XLE offers 402 miles of (theoretical) range versus 357 for the Limited, which Toyota attributes to the latter’s additional weight and a more aggressive wheel-and-tire setup. Given the limited availability of hydrogen fuel stations, we figured more range was a good idea.

Also, the $50,495 Mirai XLE is a surprisingly lavish car. Standard equipment includes heated front seats upholstered in buttery-soft faux-leather, a 14-speaker JBL stereo, navigation, and a comprehensive safety/driver assistance suite that includes dynamic cruise control and lane keeping assist. The Limited adds a panoramic roof, rain-sensing wipers, front-seat coolers, rear-seat heaters, a back-seat climate control panel, and a few other odds and ends, but we didn’t think it was worth the $16,500 price premium. One thing we will miss is the Limited’s optional interior with white seats, dash, and headliner and copper-colored armrests. The XLE cabin only comes in black, but with children and dogs in many of our households, we suppose that’s the smarter choice.

We did select the XLE’s sole option, the $1,410 Advanced Technology package, which includes front and rear parking sensors with auto-braking and a bird’s-eye-view camera. We also picked the $425 Supersonic Red paint, and the total list price for our Mirai came to $52,330, but that’s not the out-of-pocket cost. Buyers of hydrogen fuel-cell electric vehicles (FCEVs) like the Mirai quality for an $8,000 federal tax credit, and California—the only state where the Mirai is currently sold—offers a $4,500 tax credit if your income isn’t crazy-high. (If it is, you have to choose between the rebate and a single-occupant carpool lane pass, which, to an Angelino, is worth its weight in rhodium.) That brings the bottom line down to a more reasonable $39,830.

But wait, as the late-night TV ads say, there’s more: Toyota also includes a $15,000 fuel card (good for three years if you lease and six if you buy), free scheduled maintenance for three years or 35,000 miles, and 21 days of free car rental should you want to take a long trip—which, in the case of the Mirai, means pretty much any place outside the southern two-thirds of California.

At the time we had our 2016 Mirai, there were 25 fueling stations in the United States; today there are 47, 46 of which are in California (the other is in Honolulu, of all places), with another nine set to open soon. When we took delivery of the Mirai, the closest station was about a 20 minute drive from this author’s house; a few days later, another opened just 4.5 miles away, and one of the nine stations scheduled to open in California in the next few months is just 2 miles distant. Still, fueling is already proving to be the biggest headache: We’ve already run into low inventory, malfunctioning pumps, and lines of other Mirais. It’ll be interesting to see if the fueling scene improves over the next year.

Of course, we also want to see (and kind of need to know) if and how the 2021 Toyota Mirai can hit its 402-mile range. Our 2016 Mirai always fell a bit short of its promised 312 miles, which causes a bit of concern. Our EV experiences—and friends who own electric cars—have shown that range anxiety ceases to be a thing once you get to know a car and its limits, but that’s easy to say; EVs can fuel up anywhere there’s an outlet. We hope that’s the case with the Mirai; otherwise it’s going to be a very long twelve months.

For the time being, though, we and the Mirai are off to a blissful start. We’re already enjoying the Lexus-like feel of its luxe cabin and the silence and smoothness of its electric drivetrain. Our yearlong return to the hydrogen highway has begun!