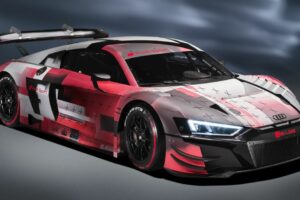 The Audi Sport customer racing programme has unveiled the Audi R8 LMS GT3 for the 2022 season, which arrives in “evo II” iteration that brings revisions tailored to the needs of private customer racing teams.

As on the earlier, 2019 iteration of the second-generation race car, at its heart is the same 5.2 litre, naturally aspirated V10 engine that can produce up to 585 hp and more than 550 Nm depending on regulations, and is paired with a six-speed sequential manual transmission.

The engine in the evo II iteration of the R8 LMS GT3 receives a new intake system that now has 30 mm-longer passages, offering increased torque in the lower and mid-range for improved acceleration from lower speeds. As before, this engine is made on the same assembly line as the engines for the road-going cars, and retains the same 10,000 km service and 20,000 km rebuild intervals.

The variable traction control has also been revised, now in the evo II offering the ability to control intervention at the apex of a corner and through the corner exit, each part adjustable independent of each other. This new refinement is accessed by two new switches on the steering wheel. Suspension for the evo II iteration of the R8 LMS GT3 now features dampers which four-way adjustable. Compared to the two-way adjustable equipment from the outgoing version of the race car, the new setup offers more scope for fine-tuning without additional conversions, said Audi Sport.

Aero work on the R8 LMS GT3 evo II was refined with the aim of making in aerodynamically more stable, particularly under braking, instead of pursuing “top aerodynamic values”. This time, less of the car’s total downforce is generated by the car’s floor, and instead more is now generated by the rear wing which mounts from behind, as on the GT2, instead of having the uprights in front of the wing.

Last but not least, the evo II revision of the R8 LMS GT3 packs an air-conditioning system similar in principle to those of road cars, where heat is extracted from the cockpit through a refrigeration circuit, and is then transported to the outside of the car for releasing. This is aimed at improving driver concentration in higher ambient temperatures and over longer racing distances, such as at endurance events.

The Audi R8 LMS GT3 evo II for the 2022 season can be ordered as a complete car at 429,000 euros (RM2.14 million) plus local taxes, or alternatively as an upgrade kit for teams that already have the previous iteration of the R8 LMS GT3.