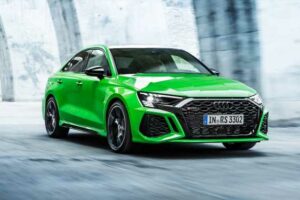 Audi has formally unwrapped the all-new 2022 RS3 sport sedan, the smallest of its high-performance cars (or highest-performing of its small cars, depending on your perspective). We’re big fans of the outgoing RS3, and from everything Audi tells us, it looks like the 2022 RS3 will be even better.

We’ve already reported on two key details. The first is the engine. It’s an updated version of the outgoing car’s 2.5 liter five-cylinder, with torque increased to 369 lb-ft from 354 and with a horsepower jump to 401. The horsepower peak arrives earlier and sticks around longer than before, too. Audi claims a 0-62-mph time of 3.8 seconds and a top speed of 155, 174, or 180 mph depending on how the car is equipped.

A note on that horsepower number: The Euro-spec RS3 is rated at 400 PS, that being metric horsepower, which translates to 395 ‘Murican ponies. We always convert PS to HP, often to the chagrin of European automakers, but we haven’t erred here: Audi tells us it went so far as to imbue the American-spec RS3 with 5 additional metric horsepower so that our cars will deliver an honest-to-goodness total of 401. Now that is rock ‘n’ roll!

The next key detail we knew about before is the torque-vectoring rear axle, called the RS Torque Splitter, which gives each of the rear driveshafts its own electronically controlled clutch pack. You may recall that a consistent criticism of all-wheel-drive Audis is that they understeer, and the four-ring brand intends the RS Torque Splitter to beat that reputation into senseless oblivion. Not only can the system all but eliminate understeer, Audi says, but it also actually allows for enhanced oversteer—and the new RS3 will be equipped with a drift mode to prove it. Audi has supplied photos of RS3s engaged in tire-smoking oversteer, and you can bet your own rear diff we’ll be putting that feature to the test. (It’s the same setup as in the latest Volkswagen Golf R, which shares a platform with the RS3. It does work quite well in the VW.)

Other new features include a refined suspension and damping and additional drive modes, including one called RS Performance, a track-only setting specifically tuned to take advantage of the RS3’s optional high-performance Pirelli P Zero Trofeo R tires. (Audi says it works just fine with regular tires, too.) The dynamic exhaust now has a variable-position flap that modifies the exhaust tone and volume based on driving mode, with the loudest (legal) sound levels reserved for the track mode.

Six-piston steel brakes are standard, and the RS3 will offer carbon-ceramic brakes as an option, with new air ducting that speeds brake cooling. Buyers can choose their caliper color: black or red with the steel brakes and gray, red, or blue with the carbons.

From the outside, the 2022 Audi RS3 has a more aggressive look than the outgoing car, including a pandemic-perfect blacked-out grille surround that makes the car look like it’s wearing a mask. The matrix LED headlights and taillights feature a dynamic lighting sequence on startup and shutdown. The RS3 can be ordered in colors unique to the model, and some paint hues will be available with a black roof.

Audi is offering a hatchback version of the RS3 for Europe, but here in North America, the sedan will be our only choice. U.S. pricing has not been announced as of yet, but the 2022 RS3 is expected to arrive in dealerships in the spring of 2022, a little after the updated A3 and new S3.