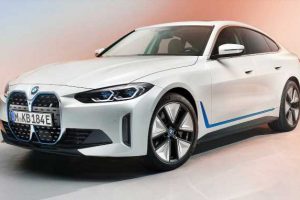 The 2022 BMW i4 EV sedan premiered a bit earlier than expected, with the first few exterior photos and even fewer details released during the company’s annual conference in Munich today. It is the latest i model to be introduced under BMW’s electrified sub-brand, which has fielded stuff like the i3 EV hatchback and the i8 plug-in hybrid sports car.

The production i4’s styling, it turns out, was accurately previewed by the Concept i4 last year. That said, the sedan’s visual were toned-down substantially, particularly in the headlights and wheels. While the concept looked like an aggressive sport sedan, we were told back then that wasn’t the goal for the production car. As such, the i4 you’ll be able to buy later this year looks like a less-aggressive version of the new 4 Series coupe, which will itself debut in four-door Gran Coupe guise soon, albeit with blue accents like those on the (discontinued) i8 sports car. Though BMW refers to the i4 as a Gran Coupe in a press release, it’s unclear if that appellation will be an official part of the car’s name.

While details are scarce, the Concept i4’s headline numbers have arrived intact or improved. BMW now promises up to 300 miles of range on the EPA cycle (based on internal estimates), bettering the 270 miles previously announced. (367 miles on the more generous WLTP cycle.) The automaker is continuing to promise up to 523 hp and a zero-to-60 mph acceleration time “around four seconds” for the quickest model. Those stats are likely to apply to an upcoming M Performance model (not a full M car), while the big range number may apply to a less sporty model.

Another, less fortunate carryover from the concept car to the real-deal i4? The rodent-with-braces fascia, wholly unnecessary in this case as electric cars don’t need big radiator grilles as they don’t have combustion engines to cool. BMW has instead chosen to use the inflamed kidneys as a place to mount all the forward-looking sensors necessary for advanced semi-automated driving features and, someday, autonomous driving. We hope this choice doesn’t lead to expensive repair costs in the event of a front-end collision, although other manufacturers stuff similar equipment in their vehicles’ noses.

It remains to be seen how much of the somewhat radical concept interior makes it to production as BMW has not released any interior photos yet. BMW i models tend to have futuristic interiors, so we wouldn’t be surprised to see a lot of the design elements make it to production, especially the massive, curved, floating instrument cluster and infotainment screen. We’re told the crystal iDrive controller is unlikely to go into production, but otherwise, BMW’s plans are still a mystery.

BMW has promised to release more details over the coming weeks ahead of the car’s on-sale date late this year as a 2022 model.