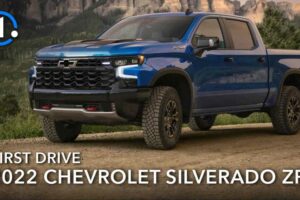 Do you like to bounce? You know, up and down, back and forth, and bobbing around? In a good day of bouncing, there are moments where you feel like your kidneys have switched places and you somehow swallowed your own pancreas. And others where you’re certain you’ve reached near weightlessness, and everything moves in slow motion. As long as you’re the one in control, it’s all fun. Sound appealing?

You’re in luck, Chevrolet refreshed its entire Silverado lineup for 2022 and that includes a new trim called the Silverado bou – excuse me: ZR2. A new, four-wheeled, adult-sized trampoline that gives you the chance to bound across landscapes of your choosing like a kid again. Think of it as a full-size version of the Colorado ZR2, or perhaps, a way to recapture your adventurous youth, while still keeping those older bones comfortable. 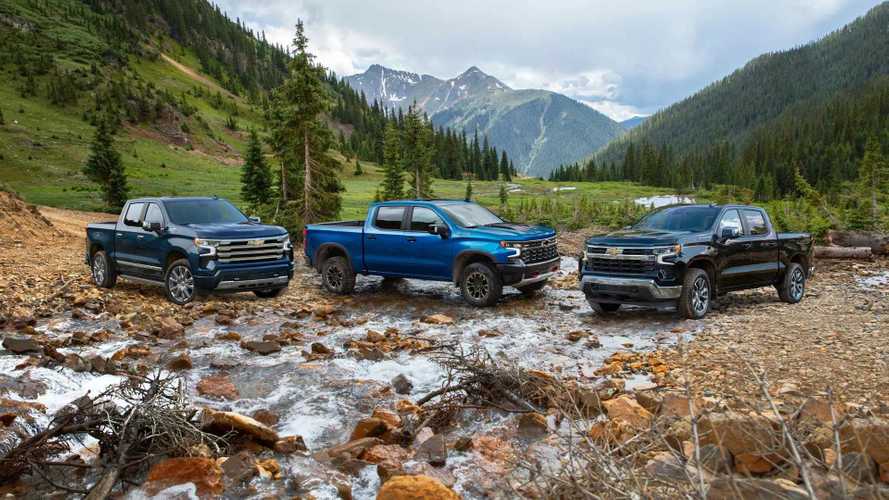 Chevrolet considers the ZR2 its flagship trim of the Silverado. And with a base price of $69,295, the bow-tie brand has a point. For that money, you get the most powerful of four Silverado engines offered, the 6.2-liter V8 pumping out a peak 420 horsepower and 460 pound-feet of torque. That power goes through a 10-speed automatic transmission, a two-speed transfer case, and on to your choice of the rear or all four wheels (although the ZR2 is four-wheel-drive only).

What makes the ZR2 a bounce machine is a taller ride height than the already raised Trail Boss, 11.2-inches versus 10.9. That, and a unique front-end, gives you an approach angle of 31.8 degrees, a breakover angle of 23.4, and a departure angle of 23.3, respectively. More than ride height you also gain suspension travel: 9.8-inches worth for the front axle, 10.6-inches for the rear, which are about two-inches and one-inch better than the front and rear of the Trail Boss.

You also roll on 33-inch Goodyear Wrangler mud tires mounted on 18-inch wheels. That rolling stock is held up by a unique spring set and suspension tune, which is dampened by MultiMatic’s exquisite DSSV (Dynamic Suspensions Spool Valve) shock absorbers. Instead of the standard deflecting disc shock internals, DSSV shocks use a precisely cut hole into an internal rod, and as an external rod moves up and down through compression and rebound, it exposes less or more of the hole for oil to pass through, dictating damping force.

Please excuse me nerding out for a moment, I just love the design. Simply put, these shocks work brilliantly and are durable, but cost quite a lot. We know because Chevy used them on the Colorado ZR2 as well as the 2014 and 2015 Camaro Z/28, where they also worked splendidly.

Chevy also added e-locker differentials on the rear and front axles. And the Silverado ZR2 comes standard with skid plates in front, under the body, and underneath the transfer case –all important things to protect.

Finally, you get visual cues about the nature of this Silverado in the form of a “flow-tie” outline emblem instead of the usual bow-tie, ZR2 logos mounted on the front fenders and tailgate, a unique grille, and a black hood insert. It’s also quite tall at 78.7-inches (it could probably dunk a basketball if engineers hand only thought to include hands).

Please excuse me nerding out for a moment, I just love the design. Simply put, these shocks work brilliantly and are durable.

With such a rugged and purposeful look outside, the inside may come as a bit of a surprise. The instrument cluster is fully digital and features a customizable 12.3-inch screen. The center console touchscreen measures out to 13.4-inches and is available on all LT and higher trim levels for 2022. That new screen also comes with Google Maps and Google Assistant baked in, allowing the use of voice commands for many functions on the truck. Of course, that’s in addition to wireless Apple CarPlay and Android Auto and Bluetooth technologies. You also get a wireless smartphone charging pad.

More traditional luxuries include comfortable and adjustable leather seats. And because it’s the largest Crew Cab body, the ZR2 provides plenty of space for two rows of passengers. Front passengers get both heated and ventilated seats and can get choosy with ambient temperature thanks to the dual-zone climate control system.

Getting In The Game

Altogether, it’s clear Chevy could no longer stand by as Ford and Ram had all the factory-off-road-truck fun with the Ford Raptor and Ram TRX. Yet, it’s also obvious the Silverado represents a distinct approach to that segment. Compared to the others, you have the least horsepower, by a lot when comparing the Hellcat powered TRX. And less impressive sounding wheel travel, et al numbers when bragging at the bar. But is that a bad thing?

Chevrolet’s chosen equipment for the ZR2 certainly adds up to a very capable machine. But even the most die-hard off-roader will drive on pavement more often than not. Here, the ZR2 remains quite civilized and comfortable. Rolling on 33-inch tires mounted to 18-inch wheels means you have a lot of side wall to absorb bumps. Furthermore, engineers tuned the massive shocks and springs to absorb jutting rocks and major pock-marked trails, which means it glides over bumps on the road like warm butter over toast.

Altogether, it’s clear Chevy could no longer stand by as Ford and Ram had all the factory-off-road-truck fun with the Raptor and TRX. Yet, it’s also obvious the Silverado represents a distinct approach to that segment.

The one downside to the superb on-road ride is less precise feel at the wheel. Big knobby mud tires with massive sidewalls lead to a bit of play in the steering. Nothing unsafe or unstable, just less than ideal when soaking up miles on the interstate.

Furthermore, the seats themselves are comfortable and include all the adjustment you need, including lumbar, to find a good fit. The truck is easily comfortable whatever your destination, be it the grocery store, work, or, I dunno, maybe Joshua Tree National Park. Home of vast expanses, beautiful rock formations, and some of the most rigorous off-roading trails around.

That’s where Chevrolet pointed me to test out this brand-new flagship trim. In addition to all the standard kit, installed on my test truck was a set of big black steel-tube rocker protectors that cost an additional $1,150. And a Borla exhaust for an extra $1,399. On start-up, the cat-back exhaust proved worth the money with a nice throaty bark and rhythmic rumble from the naturally aspirated V8.

The rocker protectors seemed like a bargain not too far into Joshua Tree. At first, the trail was innocuous enough, a patchy two-track with a few ruts and small rocks to overcome.

But the first hill I encountered was a doozy. With a track barely wider than the ZR2, the hill offered a steep rise of loose dirt with a left turn in the middle, ruts as large as bathtubs, and ridges on either side that would happily uninstall the sideview mirrors if strayed from the path even an inch. Yeah, the rockers could use the protection from this inexperienced off-roader.

Good thing that the ZR2 includes Off-Road and Terrain drive modes – I chose Terrain, as well as low-range gearing. For good measure, I also locked both the front and rear differentials. With both 4LO and Terrain mode selected, Chevrolet engages a system called one-pedal drive mode. It only works while traveling at low speeds and automatically engages the brakes when you lift off the throttle, making it easier to carefully maneuver the truck through some daunting obstacles using just one pedal. Get it?

With all of the above to help, the ZR2 merrily marched up the grade with little drama, despite at times only having one front wheel touching the ground, and at others, only one rear wheel. There was never a concern of losing traction and the shocks dampened the landings brilliantly as the weight of the ZR2 shifted from left to right and front to back. You know, a bit of bouncing.

Having successfully climbed that hill, my confidence increased, as did the toughness of the terrain. Large swathes of jutting rocks covered a narrow trail hemmed in with 10-foot-tall prickly bushes and cactuses on either side. At times, they reached out and left lovely pinstripes across the body. These narrow paths snaked their way across the National Park until we eventually reached an abandoned gold mine with old storage facilities and dilapidated crane equipment, and another epic hill that challenged all the ground clearance and suspension travel and equipment the ZR2 had.

On this ascent, there were several occasions where looking out of the windshield revealed nothing but the horizon and a sense of dread that you’ve driven to the edge of the world. Thankfully, the ZR2 comes mounted with several cameras at the front, back, and side, to give you a much better look at the terrain ahead and, indeed, drastically improve your ability to steer away from what feel like cliff edges.

After I crested that final ascent, a much milder path down was met with a relatively wide trail, maybe a lane and a half, covered in loose sand and much more manageable bumps. I engaged four-high and Off-Road drive mode and managed to crest 65 mph at times, as the ZR2 slithered its way through the sand and jumped and slid and bounced in what felt like my own personal Dust to Glory scene.

A few minutes later, we rolled onto a paved highway that was made of, I can only assume, silk sheets resting on clouds. And I rode off into the sunset, feeling accomplished.

Both the Ford Raptor and Ram TRX offer bigger numbers on the parts of the spec sheet that tend to impress folks at the bar. If that’s your goal, look away from the Chevrolet. But if your needs call for a truck that’s capable and comfortable, and also practical and useful, then the Silverado ZR2 is compelling.

You get simple equipment that works well, enough off-roading capability to see Joshua Tree from a different vantage point, and you can still haul 1,440 pounds in the bed and tow another 8,900. behind you. It’s a mighty fine truck. And, when you need one, a good trampoline too.