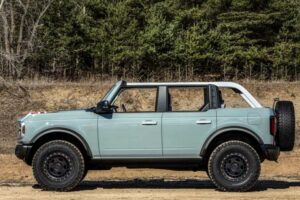 It partially avoids the issues with the availability of the hard top.

The 2022 Ford Bronco Wildtrak four-door will now come standard with a soft top, rather than the current, according to Bronco Nation. It’ll come with the hard top prep kit, though, and the hard top will be an option.

In addition, folks who have an unscheduled order of a Bronco with a hard top are not getting those vehicles until the 2022 model year.

The hard top has been a thorn in the side of Bronco production for a while. The supplier for the piece was having production issues, and then the coronavirus pandemic made those problems even worse. This caused the black-painted modular hard top or dual-top roof not to be available until the 2022 model year.

At that time, Ford tried to ease the pain by offering anyone who ordered the hard top and decided to switch 200,000 FordPass Rewards Points, which was a $1,000 value. The Blue Oval also gave buyers a sound-deadening headliner, which was a $495 value. Plus, there was a $250 voucher to attend a Bronco Off-Rodeo driving experience.

The few folks early in Bronco production who got a hard top also experienced issues. A honeycomb or snakeskin-like pattern appeared on the outer surface. Plus, the headliner was separating from the roof. The raw edges were fading and creating small cavities from material loss.

The problems were bad enough that Ford decided to replace the molded-in-color hard tops. This campaign delayed the production of the roofs for new units of the Bronco.

Despite these issues, the Bronco is proving quite popular with buyers. Ford says that 70 percent of buyers are people who don’t already own a Blue Oval product. Of the 190,000 online reservations for the SUV, about 125,000 actually moved forward to place an order.