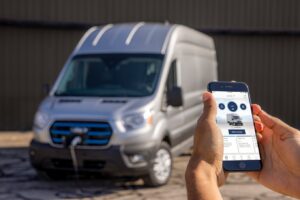 WHAT IT IS: Electric pickups have captured the attention of the public, but electric vans are poised to make a far larger impact globally, as delivery giants like Amazon, FedEx, UPS, and the USPS transition from internal combustion to electric power. As the electrified version of the best-selling van in America, the 2022 Ford E-Transit is poised for immediate success.

WHY IT MATTERS: To suit the needs of commercial buyers (and more eco-minded #vanlifers), the E-Transit will be offered in a dizzying array of combinations, just like its gas-powered counterpart. The cargo van variant will be sold in three lengths and three roof heights. Payload will max out at 3,800 pounds, while cargo capacity maxes out at 487.3 cubic feet, the same as the gas-powered Transit. Ford is also offering a chassis cab and cutaway model, but Crew Van and Passenger Van variants don’t appear to be in the cards initially. Crucially, the E-Transit is expected to beat most of its rivals to the market, giving the Blue Oval a leg up in what’s bound to be a contentious segment.

PLATFORM AND POWERTRAINS: To be built alongside gas-powered Transits in the company’s Kansas City, Missouri, plant, the E-Transit’s running gear will be borrowed from the Mustang Mach-E. A mid-mounted (!) electric motor making 266 horsepower and 317 lb-ft of torque will drive the rear wheels, with power stored in a 67-kWh battery pack. Both the batteries and motor are packaged beneath the cargo floor, preserving precious cargo volume. Like the F-150 Hybrid, the E-Transit will be capable of functioning as a mobile generator. Ford says the E-Transit will have around 125 miles of range, most likely in the more aero-friendly short-roof configuration.

ESTIMATED PRICE: Prices for the E-Transit will start at $44,990 for a short-roof, short-wheelbase variant—just $1,600 more than a gas-powered Transit (and before any federal, state, or local EV rebates or incentives). The first few vans out the door ahead of an expected launch later this year will be sold to folks who will form a pilot program to provide Ford with usage data and work out any last-minute kinks.