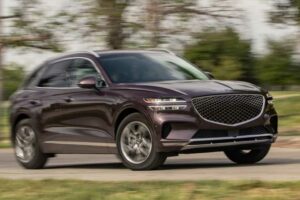 The fabulous Genesis GV70 won not only our hearts and minds but, as our 2022 SUV of the Year, our coveted Golden Calipers. SUVOTY includes performance testing, which we performed with the 375-hp 3.5T model—but with gas prices on the rise, the four-cylinder version is sure to garner increased interest. How much performance do you give up when you forgo two cylinders, 1.5 liters, and one turbocharger? We drove hundreds of miles in a GV70 2.5T, including handing it over to our test team, to find out.

Less Power, Just as Much Luxury

We should note that while the GV70 2.5T has the lesser engine, it isn’t necessarily the lesser SUV. Sure, some equipment standard with the V-6 is optional here—genuine leather, extra power-seat adjustments, and the like—but there are only a few nice-to-haves exclusive to the upper trim, including top-spec Nappa hides, a head-up display, and the nifty 3-D cluster. In all, the GV70 2.5T doesn’t feel any less sumptuous than the 3.5T, and both versions practically pummel you with poshness.

In terms of mechanicals, the 2.5T is powered, as its name implies, by a 2.5-liter turbocharged four-cylinder that delivers 300 hp and 311 lb-ft of torque, 75 hp and 80 lb-ft fewer than the V-6 engine. An eight-speed automatic and all-wheel drive are standard, just like the 3.5T, but the 2.5T has a lower final-drive ratio (4.18:1 versus 3.91:1) to help close the potential acceleration gap. The brake rotors are slightly smaller (by 0.6 inch up front and 0.8 inch out back), and the 2.5T does without the 3.5T’s electronically controlled suspension and mechanical limited-slip differential. The four-cylinder GV70 weighs nearly 300 pounds less than the V-6 version and maintains the same 52/48 percent front/rear weight distribution.

Let’s look at the numbers: The Genesis GV70 2.5T accelerated to 60 mph in 6.0 seconds flat, only 0.6 second slower than the V-6 car. It clocked a quarter-mile time of 14.5 seconds at 97.4 mph, just half a second and 2.2 mph behind the 3.5T. The GV70’s launch control helped return those impressive numbers, but away from our foot-to-the-floor testing and out on real roads, the GV70 2.5T’s power delivery makes it feel more like a daily driver than a sporty SUV.

The smaller brakes didn’t affect stopping distances: The four-cylinder GV70 drew down from 60 in 122 feet, 2 feet shorter than the 3.5T. Nose dive was noticeable, as was the squealing of tires, and the brakes were smoking after a few of our aggressive, full-pedal stops. Still, the stopping distances over multiple tests were remarkably consistent, and the brakes didn’t fail. For what it’s worth, brake feel could be improved on both versions.

Tire Size Makes All the Difference

The biggest difference between the two cars showed up in our handling tests. While we praised the GV70 3.5T’s Germanic feel, the 2.5T lacks the final micron of sharpness, which we put on the tires. That said, lateral grip was actually better in the four-cylinder car—0.84 g versus 0.82 g with the V-6—even as we had trouble getting consistent laps through the figure eight, eventually managing a time of 26.9 seconds at 0.65 g, half a second and 0.05 g behind the 3.5T. And the brakes were smoking at the end of the handling tests, as well.

About those tires: Our GV70 2.5T had the 19-inch wheel package, which includes 235/55 Michelin Primacy tires. The 3.5T we tested had the Sport Prestige package, which includes 21-inch wheels shod once again with Primacy tires—but in 255/40 size. For those not inclined to do the tire math, the 3.5T’s rubber is 20mm wider with a 27.25mm shorter sidewall, dimensional differences that readily explain the delta between the two models’ handling characteristics. The good news: You can get the bigger wheels and tires on the 2.5T model, but that means ponying up another $3,600 for the Sport Prestige package, on top of the $4,000 Select and $4,150 Advanced packages on our test vehicle.

The translation to real-world driving is much as you’d expect. The 2.5T has excellent steering feel and feedback, and it’s a spectacular luxury SUV, just without the ultimate athleticism of the 3.5T. That a four-cylinder model with lesser tires doesn’t perform as well as a more powerful one with a better wheel/tire package is hardly front-page news.

We Love the 2.5T Almost as Much

Does that dampen our enthusiasm for the four-cylinder version of the GV70? Not at all. Even in 2.5T form, the GV70 excels at coddling its occupants, which is the utmost mission of any luxury vehicle. The GV70 2.5T is quiet, comfortable, and decidedly upscale, to the point that it’s difficult to believe the Genesis brand is practically brand new to the entire automotive business. We like that all-wheel drive is standard and that nearly all of the luxury features offered on the 3.5T can also be ordered here. The GV70 in any form remains one of the finest SUVs on the market, and the 2.5T just gives us a little more time to enjoy it.