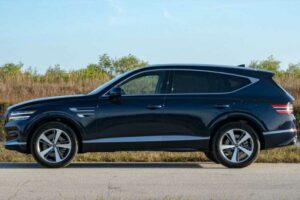 Plus other smaller upgrades.

Genesis launched approximately five years ago as Hyundai’s luxury alternative to the German premium brands, as well as Lexus and Acura. It is currently selling cars in South Korea and North America, and will very soon begin offering its products in Europe as well. Naturally, all significant upgrades and updates are introduced first at the marque’s home market, and the 2022 GV80 will be no different.

The 2022 model year for the large SUV will go on sale in South Korea in the third quarter of this year, bringing minor changes. However, according to The Korean Car Blog, the 2022 GV80 will be launched with a new and more comfortable six-seat configuration. At this point, there’s no official confirmation of the information, though our source has a spy photo that seems to suggest the six-seat version is ready for its market launch.

The new addition to the lineup will have a 2+2+2 seat layout with more space for the second-row passengers who will be sitting on two separate seats rather than on a single bench-type seat. In addition, there should be a new large armrest with an integrated touchscreen and other cool features. The display will be complemented by two more screens attached to the front seats and offering independent multimedia functions.

Just like similar versions of other cars, the second row of seats will be upgraded with an electric power function in addition to the already available heating and cooling features. It will be interesting to see whether these two seats will also get a display-controlled massaging feature.

Aside from the new six-seat version, the 2022 GV80 is expected to get minimal visual revisions, new interior color combinations, a new exterior package, and upgraded onboard technologies. Whether any of these improvements will be available for the US market, it’s too early to say for now.