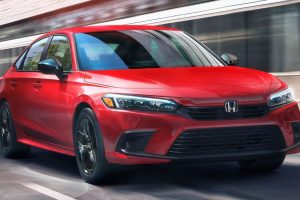 The all-new Honda Civic Sedan has finally made its full debut in the United States, bringing with it a completely new design that was first previewed by a prototype last November. The 11th-generation C-segment model also receives upgrades in other departments, including powertrain, chassis, safety and other technologies.

Like last year’s concept, the production version sports the same Accord-like sweeping roofline and distinctive window line kink near the C-pillars. According to Honda, the A-pillars have been pushed back by 1.96 inches so that it not only visually connects the pillars to the front wheel hub, but also elongates the bonnet for a more attractive silhouette.

Said bonnet ends at a more mature face, which ditches the “Solid Wing Face” full-width grille bar for a body-coloured notch just above the downturned upper intake. This is accompanied by the Honda logo in the centre and sleeker headlamps that are less upswept than before, with each cluster featuring a L-shaped DRL signature.

Meanwhile, the lower apron appears to be a spitting image of the prototype, with a large intake flanked by C-shaped structures that integrate the fog lamps. More hints of the Accord can be seen at the rear, where the Civic’s boot lid features a ducktail on it, along with Audi-esque taillights that have the same L-shaped lighting signature as up front. The new styling is certainly a lot more subtle compared to the previous FC, and the company says it focused on its design approach of Man-Maximum, Machine-Minimum (M/M) that is meant to simplify while enhancing ergonomics, perceived space and usability.

Like the exterior, the interior of the new Civic is nearly identical to the sketch released by the company previously. The most notable cue here is the honeycomb mesh that spans the width of the dashboard, with stalk controls sticking out of the air vents. Honda says this design decision was made to conceal the air vents that would otherwise deface the uncluttered and harmonious look of the dash.

The mesh acts as a divider for the climate controls and touchscreen infotainment system, which is offered in seven- and nine-inch sizes, and comes standard with support for Android Auto and Apple CarPlay. For the first time, a Bose premium sound system makes its way into the Civic, with 12 speakers scattered around the cabin for a premium listening experience. Progressing to the centre stack, you’ll find a storage cubby with a Qi-compatible wireless charging pad along with USB and power outlets. The centre stack is also heavily revised from the FC, with the gear lever, drive mode selector, electronic parking brake and brake hold controls arranged in a single file, with cupholders beside them.

For the driver, there’s a new steering wheel with more conventional on-wheel controls and a 10.2-inch digital instrument cluster, the latter being the first for the Civic and is standard on the top trim level – lesser ones get a partial 7-inch digital system with an analogue speedometer.

On the safety front, the latest Civic adopts airbag technology found in the Acura TLX and MDX, with the front airbags featuring a new structure to cradle and hold the head to reduce rotation in the event of a collision. All in, there are 10 airbags in the Civic, while the Advanced Compatibility Engineering (ACE) body structure has been enhanced to offer improved occupant protection in angled frontal collisions. The Honda Sensing suite is also standard and uses a new single-camera system that provides a wider field of view compared to the previous radar- and camera-based system. New software and more powerful processing allow the system to more quickly and accurately identifying pedestrians, bicyclists and other vehicles, along with road lines and road signs.

The new setup improves on existing functions such as more natural brake application and quicker reactions when using Adaptive Cruise Control (ACC), while providing a more linear and natural steering action when using the Lane Keeping Assist System (LKAS). Other suite enhancements include the addition of Traffic Jam Assist and eight sonar sensors, which allows for Low-Speed Braking Control as well as front and rear false-start prevention.

Under the bonnet, the Civic’s LX and Sport variants soldier on with a 2.0 litre naturally-aspirated four-cylinder DOHC i-VTEC petrol engine that serves up 158 hp at 6,500 rpm and 187 Nm of torque at 4,200 rpm.

Both engines are paired to a CVT that has been revised, with the NA-specific unit using a more robust electric hydraulic pump that reduces the load on the mechanical pump and a ball-bearing secondary shaft to reduce friction. The CVT for the VTEC Turbo engine features improved torque converter performance, while also adopting revised Step-Shift programming.

On Sport and Touring trims there’s a new Sport mode in addition to the Normal and Eco modes, which alters the drive ratios and mapping for a sportier feel, and changes the meter lighting to red. Eco mode reduces throttle and transmission sensitivity, as well as air conditioning output to help preserve fuel efficiency.

Other driving-related changes relate to the suspension, with the front MacPherson struts receiving new low-friction ball joints and front damper mount bearings to improve steering feel and self-centring, while the spring and damper alignment has been optimised to minimise operational friction.

For the rear, the track is 12.7 mm (0.5 inches) wider for enhanced stability, with a new larger compliance bushing with an improved bushing axis to reduce harshness. Furthermore, the two rear lower arms are equipped with a new bushing that reduces noise and vibration inside the cabin, while also promoting better straight-line stability and turn in. The aluminium front subframe is also new and features an improved truss and rib structure for better rigidity and stability. Additionally, a new lightweight flex tube in the exhaust system decreases noise transmission.

The 11th-generation Civic Sedan will be built at Honda’s facility in Alliston, Ontario, Canada, and pricing for the model will be announced later on. The model will be joined by the Civic Hatchback later on, which will be built for the first time in the US – since the Swindon plant is closing down – at the company’s Greensburg, Indiana plant.

So, there you have it, the all-new Civic. What do you think of it? Is it an improvement over the FC we currently have here? Based on an earlier report, we could welcome the new model within 2021, as hinted by Honda Malaysia president and COO Sarly Adle Sarkum. Excited?