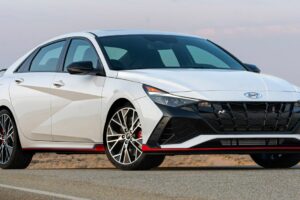 After making its initial debut in July, the Hyundai Elantra N has now been introduced for the North American market, with sales set to begin this winter for the 2022 model year. The sedan joins other performance models like the Kona N and Veloster N in Hyundai North America’s line-up, contributing to the company’s plan to have seven N and N Line offerings through 2022.

The engine sends drive to the front wheels via an eight-speed dual-clutch transmission and an electronic limited-slip differential, which allows the sedan to sprint to 100 km/h from a rest in just 5.3 seconds.

Hyundai certainly has no shortage of terms and acronyms for the Elantra N, as the DCT comes equipped with N Power Shift (NPS) that maximising torque on upshifts that attempt to simulate the “shifting of a sequential gearbox of a race car.” Meanwhile, N Track Sense Shift (NTS) automatically selects optimal gear shift timings when track driving is sensed. These features are absent on the available six-speed manual transmission, so drivers will have to do their own sensing and power shifting if they decide against the DCT, although they do get rev matching – the manual is also slightly slower in terms of acceleration.

In other areas, the power steering motor has also been relocated from the steering column to the rack itself for direct feedback, while solid engine mounts help to minimise unwanted weight shifts, joined by a rear stiff bar to strengthen body rigidity. The Elantra N is also the first Hyundai vehicle to sport an integrated drive axle derived from WRC racers, with the front driveshaft, wheel hub and bearing incorporated into a single unit to save weight and allow for a stronger driveline. Further tweaks see the air filter and intake duct incorporated into a Lightweight Direct Intake (LDI) unit to reduce pumping losses by 10% and weight by 895 grams. A dual-compound front suspension insulator and trailing arm bushings prevent shocks on one side of the vehicle from affecting the other side to keep NVH down as well.

To make the Elantra N stand out, there’s a boot-mounted wing spoiler, wider underbody cover, front lip spoiler and rear diffuser that also help improve aerodynamics. The functional aesthetics are accompanied by plenty of other tech like the N Sound Equaliser (NSE) that plays exhaust notes through the cabin speakers, while the Linear Variable Exhaust Valve System (LVE) and Upshift Bang Sound (UBS) help to ensure you hear the real thing better. Again, plenty of terms and acronyms.

It’s a bit tamer on the inside, with N branding on various contact areas and dedicated buttons on the steering wheel to call up drive modes. The seats are also mounted lower and have thinner seatbacks to reduce the weight and improve rear legroom, while other features include two 10.3-inch digital screens (instrument cluster and touchscreen infotainment) with N-specific displays and various active safety systems.