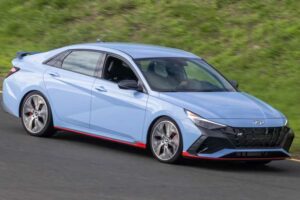 It wasn’t that long ago when the front-wheel drive sports car was all the rage, and more than a few  of them came in sedan form for the practical street racer. Those days have largely slipped away thanks to the rise of the SUV, but there are a few fun holdouts left. We’ve just driven another we can add to  the tally, and to the top of the leaderboard: It’s called the 2022 Hyundai Elantra N, and it’s damn good.

Coming in hot with 276 horsepower, 289 lb-ft of torque and an in-your-face attitude, the Elantra N is a shot across the hood of the few remaining affordable sports sedans on the market. Only the new WRX can touch it on paper, but the WRX is all-wheel drive and its automatic transmission option is a CVT. The Volkswagen Jetta GLI sedan is capable enough, but it’s down dozens of horses and lb-ft to the Elantra N, and a spec comparison with the Honda Civic Si is even more lopsided. The Golf R or upcoming Civic Type R  would be more of a fair fight against the Elantra N, but being hatchbacks they traditionally line up against Hyundai’s potent N version of the Veloster instead.

With the caveat that we haven’t driven the new WRX yet and the new Type R is still months away from even being officially revealed, the Elantra N doesn’t currently have much direct competition. While we like the way the Jetta GLI, Golf GTI and R, and the Civic Si drive, none of them is as purposeful or engaging as what Hyundai’s  N division has wrought.

While it’s slightly more serious and sophisticated than the Veloster N and it doesn’t come with the center of gravity penalty of the Kona N crossover, the Elantra N is essentially a hotted-up economy car at its core, though it straight up feels like a purpose built sports sedan in its purpose.

Once you warm up the tires, that is. The Hyundai N-spec Michelin Pilot Sport 4S tires (square, 245/35R19 at all four corners) need heat in them to do their best work and as such the out lap at the track can be a bit squirrelly. Once they’re up to temperature, though, they stick, and they let the electronically controlled limited-slip differential do its work.

The diff is so good in fact that you can effectively stand on the throttle as soon as you clip the apex and let it sort out the car’s proper orientation. In an off-camber corner, you’ll push wide a little, but it’s entirely predictable and you can bring it back in with a slight lift if so desired. Being nose-heavy, suddenly unloading the Elantra N’s rear end can transfer enough weight to get the rear end to walk a bit, but again, it’s entirely predictable, easy to adjust with the throttle, and useful for pointing the car in some situations. More importantly, it doesn’t do more than a little walk. Even when the rear end feels very light, it doesn’t try to come around on you.

If you really want to feel like you’re driving the Elantra N to its limit, get the six-speed manual transmission. Yes, the optional eight-speed dual-clutch automatic will no doubt be superior for racing applications, but the manual is just plain more fun. Timing your gear changes and nailing your heel-toe throttle blips and clutch releases makes it feel like you’re having more influence over the vehicle. A lap in the manual just feels more rewarding.

Hyundai’s shifter, for what it’s worth, is catching up Honda for front-wheel drive manual superiority, but it still isn’t quite as satisfying in feel. You’ll never miss a gate, at least. The throw is great and Hyundai has even gotten a bit cheeky and put a big, red auto rev-match on/off button on the steering wheel. You can turn it off and work on your technique, but as N boss Albert Biermann says, “I tried to be better, but forget it. You can’t beat the damn thing.”

But again, if you want to put down the hottest lap time, get the dual-clutch. The N division has made it shine in performance applications with programming so good you don’t even need to use the paddles. On the street or at the track, it’s always pulling the right gear at the right time. Plus, it gets an overboost feature called “N Grin Shift” which gives you an extra 10 horsepower for 20 seconds when you push the big red NGS button on the steering wheel (inconveniently located at the five o’clock position). As good as the Elantra N is, this isn’t a race car and the N brand, according to Biermann, isn’t about lap times and maximum power. It’s about driving fun.

Even still, this super Elantra is pretty damn good on a track. We did lap after lap on northern California’s challenging Sears Point circuit (officially Sonoma Raceway, but it’ll always be Sears Point to us) with zero detectable brake fade. The N engineers upped the size of the brake rotors, installed performance pads, added cooling ducting, and programmed the brake booster to pre-pressurize as soon as you lift off the throttle. The result is that the Elantra N’s brakes grab immediately on application and the strong, consistent pedal offers good feedback that’s easily modulated even on a track.

Ignore the “flat power” misnomer Hyundai has affixed to the engine (which refers to a very specific high-rpm condition) as the power delivery is very much exponential and doesn’t really hit until mid-range. On the track, it’s no issue, but long in-gear pulls on the street go from “ok, we’re going,” to “oh damn” as the revs rise.

Also firmly in the “oh damn” category is the stiffest setting of the Elantra N’s electronically adjustable shocks. Like the other N cars, this setting works on a nicely maintained racetrack but should otherwise be avoided with prejudice. Rather than just drop the car into Sport or N mode, we strongly encourage you to take the time to customize N mode one and N mode two and use those via the big, blue buttons on the steering wheel.

“You”—meaning journalists—”have told us N mode is too stiff,” Biermann said. “That it’s unusable; we know that. We will not change, even if you complain more, because our customers love it.”

Same goes for the seemingly endless combinations of physical and digital buttons and settings you can manipulate as you program your own personal N custom mode. But N customers apparently like to mess with all of that, too, and that won’t be changing, either. We’ll need to deal with it.

Speaking of deals, at an expected price point in the low to mid-$30Ks, the Elantra N will make you question whether a more traditional sports sedan like say the BMW M340i is worth the premium. Cars such as the BMW  that drive as well or better than the Elantra N tend to be tens of thousands of dollars more expensive and they don’t have much on the Hyundai equipment-wise, either.. So if you’re in it for pure driving fun and aren’t looking to drain your wallet in the process, this super front-drive economy sports sedan is a tough one to beat.