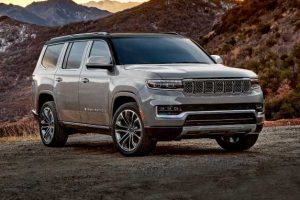 The 2022 Jeep Grand Wagoneer is finally here, along with its Wagoneer sibling, and it’s entering a segment that’s significantly more crowded than the one its predecessor occupied all those years ago. These days, there is no shortage of luxury and near-luxury three-row SUVs to pick from, so the new Wagoneers have their work cut out for them.

If you want a grand, luxurious full-size American SUV, the excellent Lincoln Navigator and the new Cadillac Escalade fit the bill. So how does the new Grand Wagoneer stack up against them? We’ve combed through the spec sheets to find out.

Since looks are entirely subjective, we’ll leave that sort of stuff out of this comparison. It’s safe to say the Grand Wagoneer, Navigator, and Escalade are all well-executed, but the rest is up to the eyes of the beholder. Instead, we’ll start with what motivates these gargantuan family haulers.

The smallest (in terms of cylinder count and displacement) is the 3.5-liter twin-turbo V-6 that rests under the hood of the Lincoln. It’s the only engine offered in the Navigator, but it isn’t wanting for power. The turbocharged mill churns out 450 horsepower and 510 lb-ft of torque. That’s more than enough get up and go for the big SUV, as we recently found out.

Under the hood of the Escalade you’ll find either a 6.2-liter gas-fed V-8 or a diesel-powered 3.0-liter turbocharged I-6. Since the rest of the competition is sticking with gas-powered engines, we will do the same here. The V-8 in the Escalade kicks out 420 horsepower and 460 lb-ft of torque. The Grand Wagoneer comes with a 6.4-liter V-8 that makes 471 horsepower and 455 lb-ft of torque, making it the most powerful yet least torquey SUV here.

2022 Grand Wagoneer vs The Competition: What Isn’t on the Inside

If you’re even thinking about buying a massive premium SUV, you’re buying it for space and capability, not fuel economy or performance. In terms of overall size, it’s a pretty close contest between these three. The Grand Wagoneer rides on a 123-inch wheelbase, while the Escalade and Navigator utilize 120.9 and 122.5 inch wheelbases respectively. In terms of overall length, the Jeep is again the largest. It’s four inches longer than the 210-inch long Navigator and three inches longer than the 211-inch long Escalade. (Note that the Navigator and Escalade both offer long-wheelbase variants, which are larger still than the Grand Wagoneer; we understand a long-wheelbase Grand Wagoneer is on the way.)

So which of these three mean machines is the biggest on the inside? As is the trend with newer cars getting bigger and bigger, so too has the Grand Wagoneer. It offers the most passenger volume out of this big three, with a total of 179.2 cubic feet of stretch-out space inside the cabin. The Escalade and Navigator have 168.4 and 172 cubic feet of passenger volume inside the cabin, respectively.

Though it might be the largest in terms of total volume, when it comes to cargo capacity, the Jeep falls behind the Caddy and the Lincoln. Thanks to an available rear passenger comfort screen on the Grand Wagoneer, the amount of cargo volume behind the first row is somewhat compromised compared to the normal Wagoneer. All told, there is 94.2 cubic space of cargo room in the Jeep.

The Escalade is the largest of the group when it comes to space behind the front passengers, offering a cavernous 109.1 cubic feet of free space to work with. The Lincoln comes close, with 103.3 cubes of total room. With the rear seats up, however, those figures will obviously shrink.

2022 Grand Wagoneer vs The Competition: Can You Take Them Off-Road?

If, for some reason, you needed a giant body on frame SUV to also go off-road, you’re in luck. All three of these full-size people haulers offer 4WD systems and they should be plenty capable in inclement conditions. But what about for off-roading? After all, Jeep is at its core an off-road brand.

If you must ask, Jeep says the Grand Wagoneer has an approach angle of up to 25 degrees, a breakover angle of 22 degrees, and a departure angle of 24 degrees as long as you spec the optional air suspension. Those numbers are three or four degrees lower with the standard suspension setup. Jeep offers its capable Wagoneer 4WD system, Quadra-Drive II with an electronic rear locking differential, as standard.

One thing that may or may not be on the mind of an SUV buyer is towing. All three of these body-on-framers have towing ratings in excess of 8,000 pounds. The Escalade owns the lowest max-tow rating here and is able to pull a max of 8,200 pounds with the 6.2-liter V-8 and 2WD. Opt for 4WD and max tow capacity drops to 8,000 pounds.

The Navigator has a max tow rating of 8,700 pounds but, like the Escalade, you’ll need to opt for 2WD. Should you need all four wheels driven, max towing falls to 8,300 pounds. The Grand Wagoneer owns the most impressive rating of this trio, and can tow a claimed 9,860 pounds.

We’re eager to get behind the wheel of the new Grand Wagoneer and see if it’s worthy of its classic name and, perhaps more importantly, see how it stacks up against the Caddy and the Lincoln in the real world.