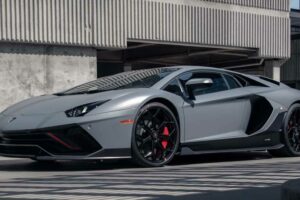 Back when Lamborghini first unveiled the Aventador a decade ago, the editor who held my job at the time liked to bandy about a quote misattributed to Ernest Hemingway. You’ve probably heard it, the one about bullfighting, mountain climbing, and motor racing being the only true sports. I haven’t heard it in a long time, but something about driving the last version of this car, the 2022 Lamborghini Aventador LP 780-4 Ultimae, brought it rushing back to mind with the ferocity only a V-12 Lamborghini can muster.

Between the company’s penchant for naming its cars after famous fighting bulls and the softball analogy bullfighting offers for a lazy car writer looking to describe a wildly powerful supercar, it’s no wonder the wordplay has been belabored beyond the point of cliché—”Let’s grab this bull by the horns!”—and thankfully mostly abandoned. It hasn’t been applicable since the birth of the Huracán in 2014, anyway.

The numerous parallels beyond the driving metaphors, though, are worth considering as an era comes to an end in a single car. Well, 600 of them, to be exact: 350 coupes like this and 250 roadsters (technically 615 total since a few are at the bottom of the ocean and had to be reproduced).

Incidentally, that “Hemingway” quote is correctly attributed to American matador, author, artist, boxer, and nightclub promoter, Barnaby Conrad. He wrote a well-received biography of famous matador Manolete, who died at the horns of Islero, which became the name of Lamborghini’s fourth car.

The Aventador, like so many others, was named after a famous fighting bull, and like its namesake, it is fated to die. Only 0.3 percent of fighting bulls are estimated to survive the ring; Murciélago, the namesake of the Aventador’s predecessor, did. And although Aventador was honored with the Trofeo de la Peña La Madroñera as the bravest bull of the 1993 Zaragoza season, the award was given posthumously. So, too, may the car that bears his name be honored as the greatest of the unadulterated V-12 Lamborghinis.

It is fitting, then, the company chose to name this limited-edition final model “Ultimae.” Directly translated from Latin, it means “last,” but it’s also the root word of “ultimate.” Lamborghini’s last, best effort not only for the Aventador, but for its heritage.

You see, it’s likely this will be the last naturally aspirated, non-hybrid V-12 Lamborghini ever makes and among the last naturally aspirated, non-hybrid V-12s, period. Emissions and fuel-economy regulations are killing them as slowly and painfully as the matador’s sword (called Espada or Estoque, also Lamborghini models). Already the factory is retooling to build the Aventador’s successor, which will almost certainly employ a hybrid drivetrain to keep the V-12 legal just a bit longer.

For one final drive, though, we have the 2022 Lamborghini Aventador LP 780-4 Ultimae. The Aventador was no doubt the bravest V-12 Lamborghini, embracing new technologies and a host of brand firsts. Although the company experimented with carbon fiber since the ’80s, the Aventador was the first of its road cars to utilize a carbon-fiber monocoque frame rather than aluminum or steel. It also employed a racing-derived, inboard-mounted, pushrod-activated suspension system. Later, it would adopt rear steering, and the Aventador-based Sián FKP 37 special model would employ a supercapacitor-based hybrid system. Sans electric bits, the Ultimae is the most powerful street-legal naturally aspirated V-12 Lamborghini ever.

Will you feel the 10 extra horsepower, or the 55 pounds of additional claimed curb weight over an Aventador SVJ coupe? Not likely. If anything, you’ll notice the Ultimae—effectively an SVJ touring model—drives just a little different. Losing the SVJ’s ALA 2.0 active aerodynamics system seems to have sapped a bit of that car’s raw emotion, the Ultimae feeling a bit more civilized and a little less insistent at being driven like an absolute maniac. Adding to the perception of comity is the standard fitment of the comfort seat rather than the thin, hard sport seat.

What the loss of ALA has taken in the car’s sense of urgency, it gives back in style. Massive rear wings are polarizing, and much as we love the SVJ’s attitude, it’s easy to like the Ultimae’s sleekness even more. Returning to a motorized hideaway wing shifts the focus down to the massive rear diffuser and makes it look even bigger and more radical than on the SVJ. Up at the pointy end, the SVJ’s pencil-thin mustache never sat right, and you don’t miss it even if you do miss what it did as part of ALA.

A Nice Change, A Lot of the Same

Critically, in the Ultimae Lamborghini has corrected a minor flaw in the SVJ Roadster’s rear-steering system. Driven hard, the Roadster’s rear steering was overeager, responding too sharply to steering inputs and requiring you to make corrections midcorner. Much as the SVJ Roadster fixed the earlier SVJ Coupe’s braking shortcoming, the Ultimae has addressed the Roadster’s steering fault. The rear end once again behaves in perfect concert with the front, making the rear steering invisible to the driver.

The one Aventador deficiency present from day one that has not and will never be solved is the transmission. There’s just no overcoming the operational realities of a single-clutch automated manual transmission. Lamborghini has tried harder and longer than anyone else, but there’s no hiding the acceleration dip during gear shifts, especially at low speed. Late-model Aventadors shift better than early ones, but it’s still a frustrating anachronism in a world of seamless dual-clutch automatics (including the less expensive Huracán’s). The key is to drive it like a manual transmission, lifting almost entirely off the throttle just before pulling the upshift paddle, a tricky dance to master but one that virtually eliminates the usual whiplash gearchange. We won’t miss it.

Nor was there any real fix for the Aventador’s low windshield header and massive A-pillars. Cool as the deeply raked windshield looks from the outside, it always made looking out from the inside a challenge, especially when driving fast. On flat ground, the thick pillars still obscure the corner you’re trying to look through, and in driving uphill the low roof only compounds the issue.

Otherwise, the view from the comfortable seats has remained remarkably contemporary for a 10-year-old car. The Aventador’s introduction of the “missile-launch” engine start/stop button alone earns it a place in the Lamborghini hall of fame, and even the outdated Audi infotainment system is still easier to use than the Huracán Evo’s inscrutable touchscreen, even if the dial still spins the onscreen menus the wrong way.

More important than any of that is the noise the missile-launch button activates. As with emissions laws, the Aventador’s screaming 6.5-liter V-12 engine can’t outrun noise laws, even with 769 hp—all the more reason to let it sing while you still can. Nothing else sounds like a V-12, especially not at 9,000 rpm. Just please do it while driving, not while parked at an impromptu car show. You know who you are.

The Aventador’s story has been as much a roller coaster as driving one. A personal note: I remember picking my jaw up off the floor in Sant’Agata Bolognese after CEO Stephan Winkelmann pulled the sheet on the car’s naked carbon-fiber chassis and pushrod suspension for the first time. I remember just as well my utter disappointment a few months later when the car managed to fade its massive carbon-ceramic brakes during our now-also-dead Best Driver’s Car competition while also demonstrating a wicked temperament at corner entry.

Then came the 2015 Aventador SV and with it a sudden commitment to make V-12 Lamborghinis corner as well as they accelerate for the first time ever. That’s the car everyone wanted the Aventador to be. Lamborghini hasn’t always gotten it right since then, but it’s never wavered on the promise.

Finally, with the 2019 Aventador SVJ, that promise was realized: an Aventador that drives like its body, its carbon-fiber chassis, and its crazy inboard suspension suggest. Not just power, but control. Nimbler than ever; no longer prone to stepping out at corner entry; seemingly limitless grip; it was a true supercar, not just a showpiece. The Ultimae is all that, short one degree of madness. It’s still a massive car that doesn’t shrink around you, but it no longer feels like it needs to.

The World Wait’s for Nothing

For too long, the Aventador better embodied an actual Hemingway quote. “Bullfighting,” he wrote, “is the only art in which the artist is in danger of death and in which the degree of brilliance in the performance is left to the fighter’s honor.” No more. The 2022 Lamborghini Aventador LP 780-4 Ultimae is the Trofeo de la Peña La Madroñera honoree. Now, the Aventador can rest. It has suffered enough of the figurative barbs its namesake suffered literally in the ring, and the company has landed the killing blow, a quick strike to the heart.

It’s a barbaric sport, bullfighting. Hemingway knew it, loved it anyway, and predicted its end, much the same way we love the V-12 engine despite its effect on air pollution and the climate and know that its days are also numbered. It would likely surprise both Hemingway and Ferruccio Lamborghini, born under the sign Taurus and from which Lamborghini took his company logo, to learn the V-12 would be the first to go. The 2022 Lamborghini Aventador LP 780-4 Ultimae is a fitting send-off to both a transformational car and a legendary engine. Whatever comes next will build on what the Aventador began, but an era ends with this perfectly imperfect Lamborghini.