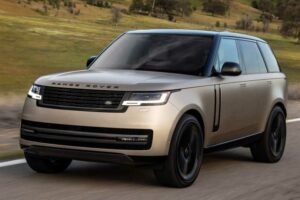 The new 2022 Land Rover Range Rover might underwhelm you at first. Watch one pull up to the curb to greet you at the airport, and you find yourself thinking, “New Range Rover? Old Range Rover? Who knows?” You need to walk around back to see its new hidden taillights and coke bottle hips to be sure. However, over two days of driving the new 2022 Range Rover around California’s central coast and wine region, we discovered that while it may not look much different, the latest Range Rover is a remarkably thorough evolution of one of the world’s most famous luxury SUVs.

The new Range Rover may not look all that different than its predecessor, but once you start peeling back its layers, you find an incredibly extensive update to the classic Range Rover formula.

For starters, the 2022 Range Rover rides on a new platform. Dubbed MLA-Flex, the architecture allows for more body styles, seating configurations, and powertrain options than have ever been available on Land Rover’s halo product.

The new 2022 model continues to offer buyers a choice of two lengths, a 199.0-inch long standard-wheelbase (SWB) model and the 207.0-inch long-wheelbase (LWB). The new LWB allows for the creation of the first-ever three-row seven-seat Range Rover, as well as provides for super-luxe four- and five-seat packages.

Inside, the new Range Rover is in fact unrecognizable from the version it replaces. The cleaner, more elegant cabin is designed to “reduce the cognitive load on the driver.” In plain English this means it’s supposed to be simpler and easier to use. It features a crisp binnacle-less 13.7-inch digital dash, a massive convex 13.1-inch infotainment display, and a couple knobs and buttons for the HVAC controls, volume, and drive modes. That’s it. In addition to the visual and tech upgrades, the cabin also features active noise cancelation and the novel use of alternative materials like ceramics, wool, and leather alternatives. Land Rover’s latest Pivi Pro infotainment suite is designed to be as easy to use (and update) as your cell phone, and it features haptic feedback that does an admirable job of replicating a real button push.

While the SWB Range Rover may only be available with five seats (fret not—that middle seat can still turn into a swanky executive-style control panel), it does have more powertrain options available than the LWB Rangey does. Standard across the board is Jaguar-Land Rover’s Ingenium 3.0-liter electronically supercharged and turbocharged I-6. Found on P400 SWB and LWB models, it produces 395 hp and 406 lb-ft of torque.

As for that unique powertrain? The SWB-only Range Rover P440e plug-in hybrid pairs the P400’s six-cylinder with a 132-hp electric motor and a DC-fast-charge-capable (at peak rates of 50 kW) 31.8-kWh battery pack. Total system output is 434 hp and 457 lb-ft of torque. Land Rover expects the P440e to net about 48 miles of electric range on the EPA cycle.

No matter the engine you choose, all 2022 Range Rovers route power through an eight-speed automatic into a four-wheel-drive system. All also feature four-wheel steering, air springs, electric dampers, and a system that scans the road ahead to virtually eliminate impacts. A 48-volt electric anti-rollbar system is also available for the first time on a Range Rover. Found on the Range Rover’s VW Auto Group rivals like the Bentley Bentayga, the system is designed to reduce body roll in corners and improve off-road articulation.

Range Rover on the Road

Land Rover made a wide variety of Range Rovers available for us to sample, including a 2022 Range Rover P530 First Edition (SWB)—essentially a 2022-only limited-run of the near-loaded Autobiography trim—the range-topping LWB 2023 Range Rover P530 SV (confusingly the SV is a 2023 model; the others are 2022), and an entry-level Range Rover P400 SE—as if you could call anything starting at more than $100,000 “entry level.”

No matter the powertrain, wheelbase, trim, or number of seats, the new Range Rover experience is singular: Think of it as luxury without any fuss.

Of the two engines, you would likely think the BMW-sourced one would be most befitting of the new Range Rover. Like it is in the BMW X7, 8 Series, and others, the V-8 is a smooth, powerful mill. Muted and refined, it never growls or barks like JLR’s own 5.0-liter supercharged V-8 does, instead evenly churning out waves of torque—much like a BMW 4.4-liter V-8 did in this vehicle’s predecessor two decades ago.

That’s not to say Land Rover’s Ingenium engine is a poor match for the Range Rover. In practice, the two missing cylinders go unnoticed. The mild-hybrid powertrain has strong low-end shove off the line and ample passing power. Range Rover owners who regularly cart around five-plus passengers might be tempted to upgrade, but for most owners the Ingenium engine is more than adequate.

No matter the engine, the Range Rover’s transmission shifts nearly imperceptibly. Although eager to explore its higher ratios to smother any chance the I-6 or V-8 gets to make a peep, it downshifts quick enough that passing power was never a problem with either powerplant.

The new Range Rover’s steering is classically British: light, tactile, and low effort. With less weight on the nose, the P400 is the more enjoyable of the two tested powertrains on a winding road; both the SWB and LWB V-8 models we drove tended to lean and rebound on their outside tires, causing the need to make steering corrections not necessary in I-6 models.

The Range Rover’s new four-wheel-steer system doesn’t make a noticeable difference on curvy routes, as the luxury SUV never really shrinks around you in the same way a Bentayga, or Porsche Cayenne do. On the other hand, the system makes a massive difference at low speeds and around town, allowing the Range Rover to feel about as maneuverable as a Honda CR-V.

Ride-quality is generally great, though perhaps not quite as refined as we’d expect given air springs, electronic dampers, active anti-rollbars, and a road-scanning system. Both SWB and LWB models, especially the V-8-powered-ones, tend to gently roll and bob on less-than pristine pavement as the 23-inch wheels glance off impacts. It’s never outright unrefined, but the LWB P400 felt more buttoned down than the P530 versions, and more stable. If smooth sailing is your priority, we suspect a P400 on the standard 22-inch wheels is the Range Rover to have.

Is It Any Good Off-Road?

Land Rover set up a few light off-road courses for us. These dirt roads wound up and around the vineyards of California’s Sonoma and Napa valleys. The Range Rover was hardly challenged on the courses—but a compact crossover wouldn’t be, either. We’ll reserve judgement on the new Range Rover’s off-road credentials until we get our hands on one on our home turf.

Not a Bad Seat in the House

Whether you’re the driver or a passenger, there’s no bad place to be in the new 2022 Land Rover Range Rover. The cabin is impeccably finished, quiet, and relaxing.

If making a statement is your priority, look no further than the range-topping 2023 Range Rover SV LWB. Designed to rival the Mercedes-Maybach GLS, it features dozens of paint, trim, carpet, and upholstery options. It’s also available with the “4-seat SV Signature Suite with Executive Class Comfort Plus” rear-seat package. Available only on the LWB SV, this $19,740 option is impeccably-well equipped, which it better be at that price. It’s warm, welcoming, and luxurious—the difference between an airliner’s first-class and business-class cabins. The right-rear seat in particular is nice. It offers occupants leg- and footrests, heat and ventilation, massage, and what feels like an infinite level of adjustment. Regardless, both rear seats share a responsive center-mounted touchscreen, a fridge, cupholders, and a neat pop-up centrally located table. Fit, finish, and material quality were especially impressive in the LWB Range Rover SV—we didn’t detect a single rattle or shake from the intricate rear-seat package.

A step down the trim walk is the Autobiography-based First Edition. While not as opulent as the SV, you don’t give up much. The cabin is tastefully done up with thick leather seats and trim, lightly finished wood, and piano-black plastic and real aluminum trim. The stitching is arrow straight, fit-and-finish is top notch, and there’s not a piece of cheap plastic found in the cabin.

Although objectively the cheap seats compared to the SV, the Range Rover SE was also equally well-built and luxurious. Seats, no matter the model, are comfortable, supportive, and offer plenty of adjustability. Ingress and egress into the backseats of the SWB Range Rover is a bit pinched by the rear wheel arches, but the seats themselves are spacious and adult friendly. LWB models are even easier to get in and out of, and the third row is truly massive, offering nearly as much space as its American rivals.

How Much Is the New Range Rover? Is It Worth the Cost?

Ultimately, the 2022 Land Rover Range Rover may not look like much at first glance, but it quickly revealed itself to be a remarkably well-conceived rethink of what a Range Rover is and what it can be. The new Range Rover is more comfortable, more luxurious, and all-in-all easier to live with than any of its predecessors. It’s a heady reminder to all automakers playing in the full-size luxury SUV space about who really wears the crown.