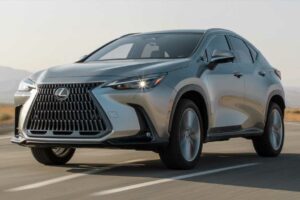 Plant-based meat substitutes have gotten so much better. The tough, bland, soy-based solutions of old have been replaced by scientifically engineered alternatives that semi-convincingly emulate the textures and flavors they’re trying to replace.

Compared to the competition, though—the mooing, resource-intensive, methane-polluting bovines that have been a staple of the American diet for decades—even the new and improved meat alternatives can’t compare. Such is the case with the all-new second-generation 2022 Lexus NX350h hybrid.

Let’s start with the numbers. Both the first-generation NX300h and the new NX350h utilize 2.5-liter four-cylinder engines that work in concert with multiple electric motors, including one in the rear that provides the NX with all-wheel drive. Despite the similar configuration, the outgoing model only delivers 194 hp all in, whereas the new powertrain develops 45 more horses (for a total of 239 hp); that’s also a 20-hp advantage over the mechanically similar Toyota RAV4 Hybrid.

Thanks to its additional power and slightly leaner curb weight, the 2022 NX350h accelerates to 60 mph in 7.0 seconds, which is 1.3 seconds quicker than the last NX300h we tested and a few tenths quicker than the gas-only 2022 NX350 with its 2.4-liter turbo-four.

The new hybrid also outperformed the turbocharged NX350 in the quarter mile with a 15.4-second pass at 89.0 mph, but the all-gas variant crossed the line with a 3.1-mph faster trap speed. In the stopping department, the 2022 NX350h takes 129 feet to come to a halt from 60 mph.

The new hybrid’s efficiency improvements are even more notable. The outgoing NX300h returned 33/30 mpg city/highway, which is decent but not exactly impressive for a hybrid. The NX350h trounces its predecessor’s fuel economy figures with an EPA rating of 41/37 mpg city/highway —all while delivering more power and superior dynamic performance.

In addition to the mechanical improvements, Lexus has also addressed what we found to be one of the outgoing model’s biggest flaws, namely its interior quality. In our 2020 NX300h review, we noted cheap-feeling leatherette seats, exposed bolts on either side of the center console, and a cumbersome trackpad-controlled infotainment system.

All of those issues have been addressed. Lexus has fitted the NX350h with handsome, contrast-stitched two-tone upholstery befitting the compact luxury SUV’s price point, and there’s no garish exposed hardware to be found.

Most importantly, the Japanese automaker has ditched its inconsistent, widely panned laptop-like infotainment controller setup. In place of the outgoing model’s standard 8.0- and optional 10.3-inch trackpad-controlled displays, the new NX features a base 9.8-inch screen and an available 14.0-inch display, both of which are positioned close to the driver and finally gain touch controls.

The 14.0-inch touchscreen in our test vehicle was clear and responsive. We like how Lexus embedded in-screen physical dials for volume and climate controls. Some editors noted that this was just a large screen with not much to it from an experience standpoint and the system could be more intuitive. But for folks who will mostly utilize the infotainment display for navigation and media (likely via the standard wireless Apple CarPlay and Android Auto), this won’t be an issue.

For buyers choosing between the two NX350s (turbo-four or hybrid), most will be better suited by the latter. On the road, the hybrid provides similar acceleration to the gas-only NX along with the requisite fuel economy gains. One note, though: The NX350h utilizes a continuously variable automatic transmission (CVT) as opposed to the NX350’s eight-speed auto, and at full throttle, the gas engine emits a coarse moan at constant high rpm. Most of the time, though, you won’t notice it.

The hybrid NX proved to be a champ out on an off-road course we evaluated it over. It has enough ground clearance to traverse deep sand or snow, and with traction control off, the system keeps the revs high and the wheels spinning in order to maintain solid forward momentum. In shallower sand, it’ll even allow a little slip if you want to play luxury rally driver.

Despite its off-road prowess, we found the NX350h’s overall ride and handling somewhat less impressive. Dynamically, the NX defaults to understeer (as most similar crossovers do and probably should) with reasonable grip, but it doesn’t deliver the type of engaging driving experience the Jaguar F-Paces and Genesis GV70s of the segment do. From an overall ride quality perspective, the NX350h’s suspension will easily reach its bumpstops through larger bumps and struggles to settle down over stretches of uneven pavement. The cabin is proper luxury-SUV quiet, but the rest of the experience fails to live up to that standard.

This new take on the NX is arguably the best compact SUV Lexus has ever built, but unless you’re tied to the Lexus badge, there are better options in its segment. Sure, it’s the only non-plug-in hybrid in the class (ignoring mild hybrids, that is), but if you really want to reduce your environmental impact, either buy an EV or go for a more impressive non-hybrid SUV and eat a little less beef.