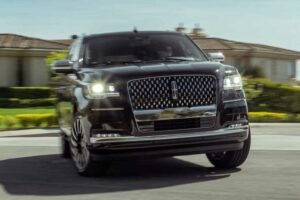 Lincoln’s Navigator three-row SUV may be the oldest of the great American luxury barges on the market today, but that doesn’t mean it no longer holds its own in the powertrain and dynamics departments. Actually, in just about every metric we measure, the big Lincoln with two fewer cylinders and two more turbos remains every bit the match of the new, V-8-powered Cadillac Escalade and the (don’t call it a Jeep) Grand Wagoneer. (The Grand Wagoneer will soon be available with a version of Jeep’s new 3.0-liter twin-turbo Hurricane inline-six with 500 horsepower, but we haven’t tested it yet.)

In an effort to keep up with its colossal colleagues, the 2022 Lincoln Navigator has undergone a face-lift, adding a number of features and updates to lend it more panache and prestige, along with an updated exterior look that puts it more in line with its Lincoln SUV siblings. Thanks to its “L I N C O L N” branding along the back hatch, Navigator badge on the fender, and its special gleaming grille of Lincoln logos, you won’t mistake it for anything else.

We had a Black Label version of the 2022 Navigator in for testing, and as you’d expect from the top-of-the-heap trim level, it came with virtually every bell, whistle, and kitchen sink Lincoln has in its considerable luxury arsenal. The newly updated 13.2-inch infotainment screen runs a Lincoln-ized version of Ford’s Sync 4 system; the new-for-2022 multi-adjustable, second-row captain’s chairs feature a class-exclusive massaging function; its Lincoln Play rear-seat entertainment system comes with two 10.1-inch screens that can run Amazon Fire TV features separately; and you can revel in its magnificent, 28-speaker Revel sound system.

Not everything we’ve experienced from the 2022 Navigator thus far has been stellar, particularly its new ActiveGlide hands-free driving system that serves as a foil to Cadillac’s Super Cruise. But for $109,950 all in, the Navigator Black Label remains a competitive package given its recent updates, one that’s priced in line with the top trim levels of the Escalade and Grand Wagoneer.

One thing that hasn’t changed for the 2022 model-year Navigator is its powertrain, a 3.5-liter twin-turbo V-6 with 440 horsepower and 510 lb-ft of torque, with a 10-speed automatic transmission shifting the gears and an adjustable all-wheel-drive system on tap. It can tow up to 8,700 pounds depending on configuration, which is a full 500 pounds more than the Escalade. If you need to pull really heavy stuff with your three-tons-of-fun people-hauler, then you want the Grand Wagoneer with its 9,850-pound rating (the Hurricane-powered 2023 Grand Wagoneer L will be able to tow 9,450).

Braking was another story, with the Navigator slowing from 60 to 0 mph in 135 feet, which isn’t exactly stellar. The Escalade hit the skids in 122 feet, with the nearly 300-pound-heavier Grand Wagoneer edging the Navigator’s performance by 1 foot. The test team reported some clicky ABS noise with a medium-firm brake pedal that offered quite a lot of information, which is about what they expected. But a look at a test of a virtually similar 2020 Navigator that we pitted against a 2021 Cadillac Escalade ESV (a comparison the Navigator won) had that particular model slowing to 0 mph in 125 feet, with the Cadillac coming to a stop in just 117 feet. Different conditions, different vehicles, much different results.

With the latest Lincoln tagline being “The Power of Sanctuary,” probably the last thing most Navigator owners really care about is how many lateral g’s it can pull tearing around a skidpad (0.76 g average) or its performance on our figure-eight course (27.6 seconds at 0.63 g average). That is, unless you’re looking for bragging rights. Commence bragging. Those numbers obliterate those of the Escalade Platinum (0.60 g and 30.1 sec at 0.53 g) and the Grand Wagoneer (0.65 g and 29.2 sec at 0.57 g). Despite its light and vague steering, and an ESC system that can’t be completely switched off (as is the case with the Caddy and Jeep, but their systems are more aggressive), the Navigator is far and away the most nimble of these three-ton ballerinas. “The Navigator allows you to find the right speed without interfering.”

Out on the open road is where the 2022 Navigator excels. It powers off the line at full acceleration with its twin-turbo-six offering enough piped-in, throaty engine noise to bring some thrills to your sanctuary. Thanks in part to its adaptive suspension that reads the road 500 times per second, combined with its exceedingly comfortable, 30-way seats, the Navigator’s ride is well damped and downright comfortable. Though its steering is somewhat light and vague as the test team outlined, it’s nothing that feels out of sorts on the highway, though you will experience some dive if you really put your foot down on the brake pedal.

It remains to be seen how vehicles like the Navigator will evolve, especially given how inefficient they are. But for now, the Navigator remains at the top of the American heap in the full-size luxury SUV space from a testing standpoint and otherwise, and we’re betting Lincoln and its buyers are more than happy about that.