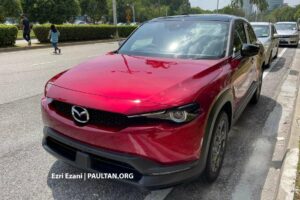 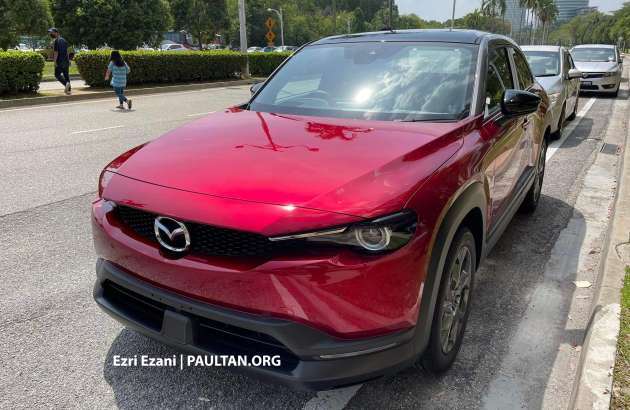 Back in October, news emerged that Mazda distributor Bermaz was planning to introduce the Mazda MX-30 Electric in Malaysia, and this was cemented further last week when a second report indicated that the all-electric crossover was confirmed for our market, due in sometime in the third or fourth quarter of next year.

Now, it’s looking closer to reality, with the sighting of the model in the country. Ezri Ezani spotted a plateless MX-30 parked by the roadside near the ministry of transport building in Putrajaya, and duly snapped some photos of the Soul Red Crystal example.

Before you get too excited, the EV is likely to follow the timeline suggested for its market deployment, and the unit seen here is probably an advance unit, in for evaluation and eventual homologation.

Revealed at the 2019 Tokyo Motor Show, the electric MX-30 features an 145 PS and 271 Nm electric motor, which drives the front wheels via a single speed reduction gear. Juice for the e-motor is provided by a 35.5 kWh lithium-ion battery, which offers the vehicle up to 224 km of travel range.

The battery supports AC charging up to 6.6 kW via a Type 2 port as well as DC fast charging up to 50 kW using a CCS port. The approximate charging time from 20-80% takes three hours with the former, while the latter requires just 36 minutes.

The MX-30 Electric is one of six Mazda models set to be introduced by Bermaz next year, and while there has been no indication of pricing, a comparison of UK pricing of the MX-30 and the Kona Electric provides some sort of a working estimate.