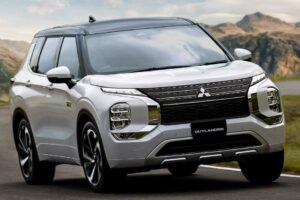 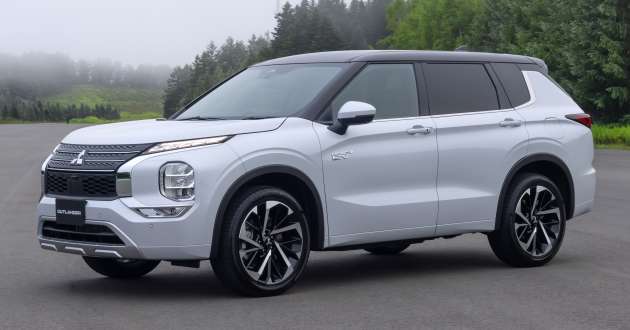 At long last, Mitsubishi has finally unveiled the new Outlander PHEV, which will go on sale in Japan from December 16 this year. Australia and New Zealand will follow after in the first half of next year, while the plug-in hybrid SUV will be launched in North America during the second half of 2022.

As we discovered earlier this month, the Outlander PHEV looks pretty much identical to the petrol-powered model that was first revealed in February, with only a few distinctive cues to mark it out as the Earth-friendly version.

These include a charging door on the right side of the vehicle as well as the addition of prominent “Plug-in Hybrid EV” and “PHEV” badges on the front doors and tailgate. Mitsubishi says there are a total of 10 body finishes to choose from, including two two-tone options and eight monotone ones – the latter includes the Diamond Colour series of Red Diamond, White Diamond and Black Diamond.

Inside, there are new buttons on the centre console engage the one-pedal driving and EV-only modes, while the gear selector gets a “B” mode to control the intensity of regenerative braking. Also in this area is the rotary dial that allows drivers to cycle through seven drive modes, with Power joining the existing Normal, Tarmac, Gravel, Snow, Mud and Eco. 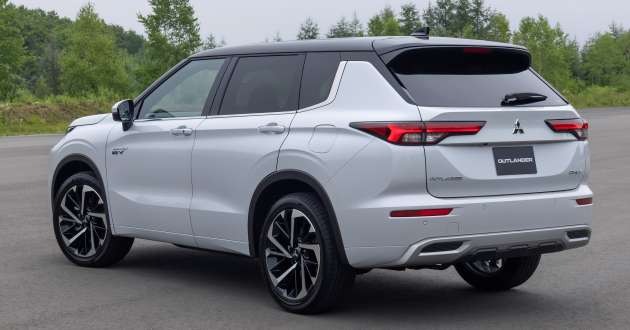 Another aspect that is familiar is Mi-Pilot Assist, which combines adaptive cruise control with stop and go and lane centring assist to keep it a set distance from the car in front and in the centre of its own lane. Models fitted with the navigation system can set the speed using traffic sign recognition and slow the car down for corners and highway exits.

So, plenty of familiar things then. However, the main draw here is the plug-in hybrid powertrain, which Mitsubishi says is a major improvement over the previous Outlander PHEV. The concept is the same as before, with electric motors on both axles providing propulsion in a majority of driving scenarios, while an internal combustion engine acts as a generator for the battery, but can also provide direct drive at higher speeds via a lock-up clutch. 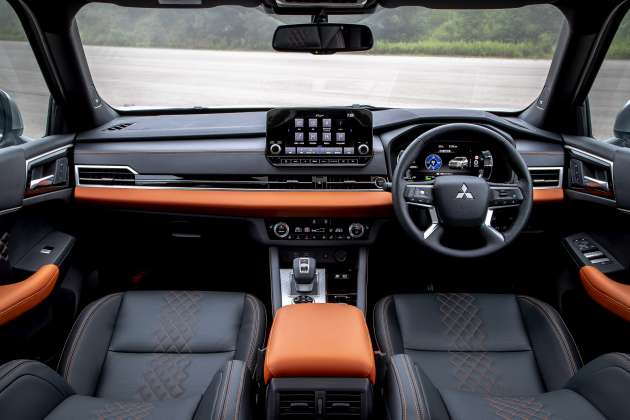 One key difference with the new model is the electric motors are more powerful than before, with the one at the front now rated at 116 PS (85 kW) and 255 Nm of torque compared to 82 PS (60 kW) and 137 Nm previously.

As for the rear electric motor, it now provides 136 PS (100 kW), which is more than the 95 PS (70 kW) of the old Outlander PHEV, although max torque is the same at 195 Nm. The twin-motor setup is part of the S-AWC (Super-All Wheel Control) system, which now benefits from a new brake-based brake AYC (Active Yaw Control) function for the rear wheels.

Mitsubishi also pointed out that the rear electric motor is now unified with the control unit to allow for enough floor space to install a third row of seats, so there’s no compromise when it comes to seating capacity compared to the petrol-powered model.

The lithium-ion battery continues to sit on the vehicle floor, but now has higher energy capacity of 20 kWh from 13.8 kWh, which raises the electric driving range to 87 km from 55 km following the WLTP standard. 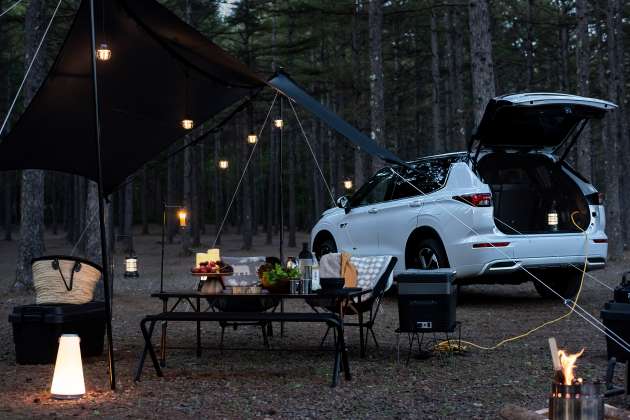 Mitsubishi didn’t provide charging times in its release, but based on the photos, the Outlander PHEV will continue to support both AC and DC charging – the previous model’s specifications were 3.7 kW for the former and 50 kW for the latter. Like the Eclipse PHEV, there’s also an onboard AC outlet in the boot that can deliver up to 1,500 watts to power electronic and appliances.

Meanwhile, the ICE is the same 4B12 2.4 litre naturally-aspirated four-cylinder MIVEC unit that is now tuned to 133 PS at 5,000 rpm and 195 Nm at 4,300 rpm. As mentioned earlier, this acts as a generator for the battery most of the time, although it can directly drive the wheels via a single 3.431 gear ratio at higher speeds when it’s less efficient to run solely on the electric motors.

Mitsubishi did not disclose the max top speed in EV-only mode, but it was 135 km/h with the older model. There’s also a larger fuel tank – 56 litres from 45 litres – which is said to provide more overall range, while the rated fuel consumption is 16.6 km per litre in hybrid mode.