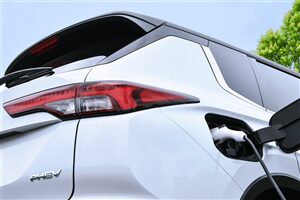 Revealed to the world in February this year, the new Mitsubishi Outlander is set to gain a plug-in hybrid model, due to go on sale in Japan in the second half of the year. A couple of teaser images have been released so far, revealing the “Plug-in Hybrid EV” and “PHEV” badges, as well as the battery charging port on the right rear fender of the car.

While the Outlander shares its Common Modular Family (CMF) platform, 2.5 litre engine and much of its components with the Nissan X-Trail, the PHEV is expected to get Mitsubishi’s own two-motor powertrain, derived from the outgoing model. It will likely receive several tweaks, as previewed by the Engelberg Tourer concept that also showcased the Outlander’s new design ahead of time. The show car was fitted with a larger 2.4 litre engine (already fitted to the current PHEV), an electric motor on each axle and a bigger 20 kWh lithium-ion battery. At the time, Mitsubishi touted an all-electric range of more than 70 km and a total range of over 700 km.

No technical details have been revealed just yet, but Mitsubishi has confirmed that the new architecture, improved component integration and revised layout has freed up space in the rear for a third row of seats. The existing model is only offered with five seats, because the battery resides under the boot floor.