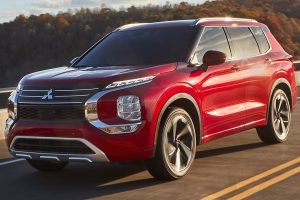 Less than two weeks on from the unveiling of the new Outlander, Mitsubishi has released pricing and equipment for the redesigned three-row SUV in the United States. As previously reported, the third-generation model is all new from the ground up, sharing its mechanicals with the latest Nissan X-Trail.

Pricing will start at US$25,795 (RM104,600) for the base ES, which will come with 18-inch alloy wheels, front and rear autonomous emergency braking, blind spot monitoring and an eight-inch infotainment touchscreen. The US$26,795 (RM108,700) Convenient Package goes straight to 20-inch alloys and adds the Mitsubishi Connect suite of security and remote services with a 24-month free trial. At the top of the range sits the US$34,645 (RM140,600) SEL Touring Package, which receives a heated steering wheel, semi-aniline leather, a 10.8-inch head-up display, rear door sunshades and everything else from the tech package. The Super All-Wheel Control (S-AWC) all-wheel drive system, now featuring brake-activated torque vectoring on the rear axle, is a US$1,800 option on each model.

There will also be Launch Edition variants of the SE Tech Package and SEL Touring Package with S-AWC, both of which do not come with the Mi-Pilot system. Instead, they are distinguished via a projected logo and Dynamic Shield illumination, a chrome bonnet badge and Amazon Echo Auto with a three-month Audible audio book subscription and a six-month Amazon Prime Music subscription. In the Nissan, the mill produces 184 PS at 6,000 rpm and 245 Nm of torque at 3,600 rpm. If those figures are carried over to the Outlander, the new engine is quite a bit more powerful than the old 2.4 litre mill, which currently makes 167 PS and 222 Nm of torque. It is mated to a CVT with eight virtual ratios.

As a recap, the Outlander is based on the same Common Modular Platform (CMF-C) as the X-Trail and borrows much of its design from the Engelberg Tourer/e-Yi Concept, with a bolder Dynamic Shield front fascia, muscular fender bulges and a “floating roof” design.

Inside, the clean horizontal dashboard design betrays plenty of X-Trail components, including the climate controls, steering wheel button layout and the aforementioned instrument, infotainment and head-up displays. Mitsubishi is claiming increased passenger space, a stiffer body shell and improved ride and handling for the car, which will go on sale in the US starting next month and reach other global markets later on.