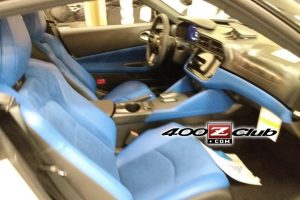 With the production version of the Nissan Z Proto having been sighted in production form and widely tipped to wear the 400Z badge, a newer, albeit blurry image of the new sports car’s interior on the Nissan Z Club forum now shows it in blue upholstery, which somewhat harks back to the interior of the original Nissan 240Z from the 1970s in a similar colour.

The sighting of the production 400Z late last month showed a clearer image of the car’s interior in black, which showed the car to feature a large digital instrument panel as well as a touchscreen infotainment unit. The modern digital element of the interior is joined by a trio of hooded analogue gauges atop the dashboard, somewhat like the setup in the 370Z (two out of three in the outgoing car, actually; the third is a digital clock.)

The news surrounding the powertrain that will feature in the forthcomning 400Z is that it will be a VR30DDTT 3.0 litre biturbo V6 engine producing 400 hp, as it does in the Infiniti Q50/Q60 Red Sport. Its output figures have been leaked, and revealed on the Project Cars 3 driving simulation game to be 450 PS, hauling a total of 1,475kg. Both manual and automatic transmissions will be offered, the latter seen here in the blue interior.

Given how closely the 400Z resembles the Z Proto show car, the forthcoming production model could also stay very close to the Z Proto’s dimensions of 4,382 mm long, 1,850 mm wide and 1,310 mm tall.

Nissan has previously said that the 400Z will arrive in showrooms in 2022, which means sports car’s official debut should be taking place later this year. A convertible version was “still an ongoing consideration”, said Z Proto product specialist Hiroshi Tamura last September. Of course, there will be more performance-focused Nismo versions in the pipeline as well.