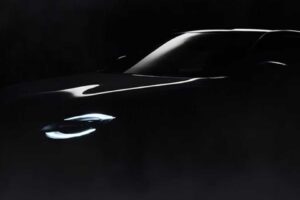 It’s no surprise it looks a lot like the Z Proto.

Nissan picked August 17 as the day to reveal the new Z sports car, and that’s just around the corner. The company released three teaser videos on Instagram the hype the car’s debut while showing off a bit of the coupe. The company previewed the new model with the Z Proto concept late last year, and spy photos appeared to show that the final product wouldn’t stray far from the concept’s design. The new teasers emphasize the similarities.

The three teasers, all super-short videos, mostly show the car hidden in shadow, though we do get a peek of the pale yellow exterior color. It looks identical to the color Nissan used on the Z Proto. Nissan didn’t provide any additional details about the car in the Instagram posts, so we will have to wait for next week to learn about the car. However, there are rumors to help fill in the gaps.

Nissan is expected to install the twin-turbocharged 3.0-liter V6 from the Infiniti Q60 Red Sport for the new Z. The engine should produce around 400 horsepower (298 kilowatts) and 350 pound-feet (484 Newton-meters) of torque, sending power to the rear wheels through a six-speed manual gearbox or an automatic. Those wanting the new Z that offers more may have to wait for the Z Nismo that’s rumored to arrive early next year, though nothing is set in stone.

None of the teasers preview the Z’s interior, though it, too, shouldn’t stray far from what Nissan showed off in the Proto. We’re hoping to learn next week when Nissan plans to open the order books for the cars. One rumor pointed to November 15 as being the date, which could mean we could see the car go on sale sometime early next year. Nissan will hopefully let us know next week.