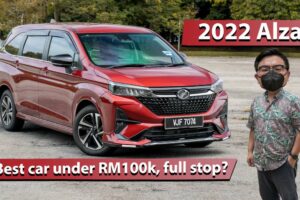 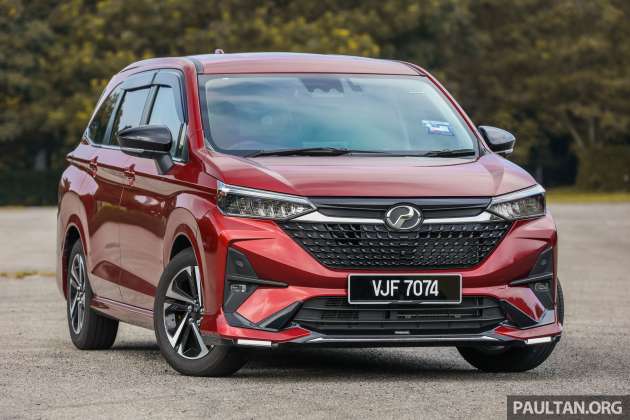 You’ve read our review of the 2022 Perodua Alza and if we sound impressed there, it’s more of the same in this comprehensive video review. Here, Hafriz Shah points out the things he likes about the second-generation Alza, as well as the bits that he doesn’t agree with. And there are a few of those. This video isn’t short, but it contains all you need to know about 2022’s most significant new car.

While the Alza isn’t perfect, the negative points are in the finer details and Perodua has done well in the things that matter the most in an affordable family MPV – space and practicality, safety and efficiency/fuel economy. We’ve come to expect those things from the market leader of late, but the Alza throws in a surprise bonus – we’ll explain in the video.

The larger body yields more interior room for both humans and cargo – interior length with the second row seats pushed furthest back is 2,765 mm, which is a significant 115 mm more than before. The 35 mm extra width of the body fully translates to interior width, too.

The old Alza was barely there as a three-row MPV and had only 83 litres of boot space with all seats raised. Now, it’s a usable 137 litres (+54L, good for a couple of duffel bags). With the third row bench folded (50:50), cargo space is now 498 litres, a massive 150L improvement.

The Alza has been merged with the Toyota Avanza/Veloz and the Daihatsu Xenia, and all sit on the Daihatsu New Global Architecture (DNGA) front-wheel-drive platform. Each has its own unique face, so the Alza will look different from the Veloz that will launch in Malaysia soon. We’ve detailed the Alza-Veloz differences in a separate post here. 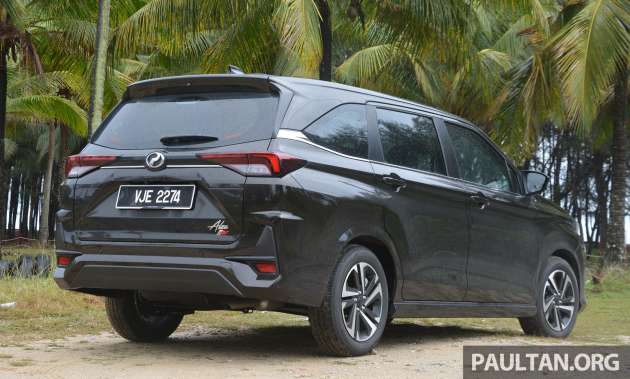 Face aside, the Alza, with its unique suspension tune and low ground clearance of 160 mm, sits 30 mm lower than the Malaysian-spec Veloz (190 mm, already lower than Indonesia’s 205 mm). This deliberately low GC was chosen for easy entry and exit for young and old members of the family, but a low centre of gravity also improves dynamics.

Under the hood is the Perodua-made Dual VVT-i NR engine that also powers the Myvi, Vios/Yaris and the upcoming Veloz. 105 hp and 138 Nm doesn’t sound like much, especially for an MPV, but at 1,170 kg, the Alza is only 20 kg heavier than the top spec Vios despite having more metal, seats and features. For added context, the sporty Mazda 3 Hatchback, which also comes with a 1.5L NA engine, tips the scales at 1,368 kg, nearly 200 kg more. That’s down to the DNGA, which also delivers a five-star ASEAN NCAP performance.

P2 says that the new engine provides 40% better fuel efficiency plus improved performance. Eco Idle (auto start-stop) is standard. The Euro 4 four-pot is paired to the D-CVT gearbox that made its local debut with the turbocharged Ativa last year. The world’s first split gear CVT system then appeared in the Myvi facelift, paired with NA NR engines. Here, like on the Ativa, the D-CVT has manual mode, which the Myvi misses out on. 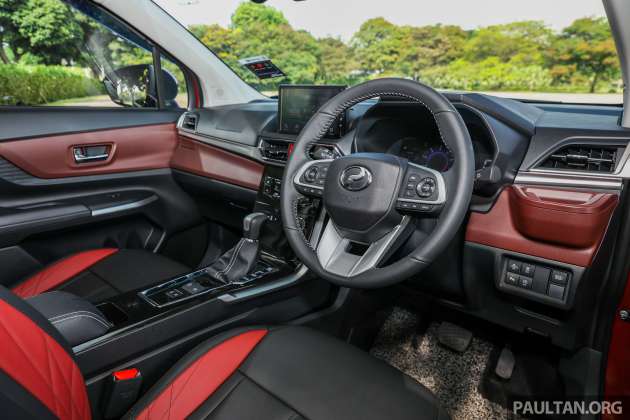 New to the brand is Drive Modes (H and AV). Normal, Eco and Power modes are selectable via a ‘DRIVE’ steering button on the right spoke, where the ‘PWR’ button is on the Ativa and Myvi. Short press for Power, long press for Eco. The latter provides heightened response while the latter optimises fuel economy.

Speaking of FC, it’s 22 km/l in what P2 calls the Malaysian Driving Cycle, which supposedly reflects local conditions. It’s 18.9 km/l in the more familiar NEDC. Perodua claims that an Alza needs less than RM40 of RON 95 petrol to travel from KL to Penang (358 km), based on the current RM2.05 per litre. We couldn’t get close to 22 km/l, but our average was a respectable figure – more in the video.

In the kit department, the Alza gets all equipment of the Ativa, with the bonus of some new-to-Perodua features. Six airbags and ASA are standard from the base model (no compromise when it comes to safety), and there’s also the digital meter panel, ACC + LKC (this pack always comes with BSM and RCTA) and the Lexus-level Adaptive Driving Beam LED headlamps.

New-to-brand features include the electronic parking brake (EPB) with auto brake hold (necessitates rear disc brakes), a 360-degree panoramic view monitor (can be manually turned on via steering button) and a new infotainment system that looks better and has Android Auto and the just-approved Apple CarPlay. The ACC now has low speed follow or traffic jam assist.

The level of kit is astounding and is way beyond what non-national B-segment sedans and hatchbacks offer for the money. Never mind Proton, which base X50 goes for RM86,300 and has just four airbags. P1’s cheapest car with ADAS is the X50 Flagship at RM113,300. The same can be said of the Veloz of course, but at an estimated RM95k, the T-badged MPV is less of a value proposition.

The new 2022 Perodua Alza is priced at RM62,500 for the base X, RM68,000 for the mid-spec H and RM75,500 for the AV. Prices are on-the-road excluding insurance, with sales tax. The AV you see here has the GearUp Prime bodykit with LED daytime running lights, as well as faux leather seat covers and other minor accessories – full GearUp catalogue here. For more on the Alza, check out our spec-by spec comparison post and written review.